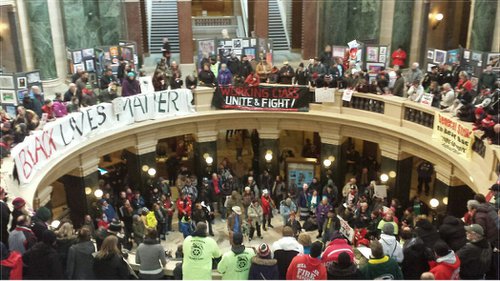 Scott Walker’s attack on public sector unions in 2011 made national headlines and spurred a spontaneous, working-class uprising in Madison, Wis. Workers occupied the Capitol building there for weeks in an attempt to use mass demonstrations to fight against capitalist encroachment on working-class rights. While these demonstrations ultimately failed and disheartened many progressive forces throughout Wisconsin, an overlooked problem remains.

Combine these atrocities with the fact that over half of all African-American neighborhoods in Wisconsin are jails. There is no denying the basic fact that Wisconsin is a prison for oppressed nations. It is clear that those involved in the struggle for workers’ rights in Wisconsin can only even start to win if and when they start fighting for the liberation of oppressed nationalities in the state.

The role of institutionalized racism in Wisconsin cannot be glossed over or brushed aside. Only by directly fighting racist repression in Wisconsin will there be working-class victories in union halls, in workplaces and in the streets.