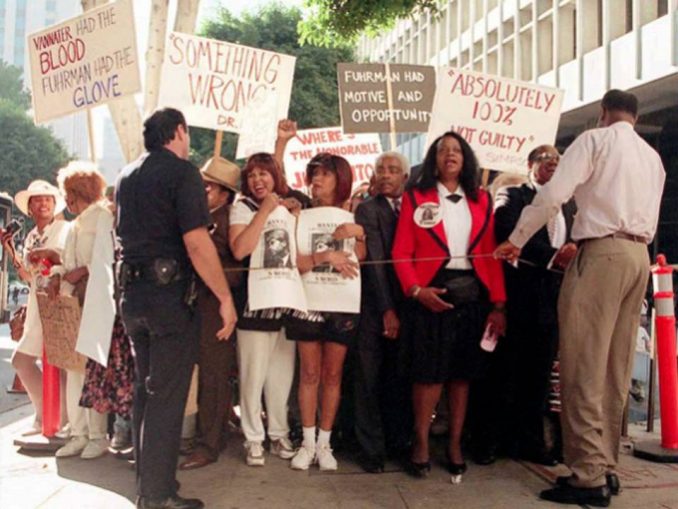 A protest of the attempt by the LAPD to plant evidence during 1994-95 trial.

Based on a talk given at a July 27 New York forum.

Orenthal James Simpson, aka O.J. Simpson, is set to be paroled from a Nevada prison in early October, after serving nine years of a 33-year prison sentence for armed robbery. His parole hearing was viewed live on July 20 by millions on ESPN, the world’s largest sports channel, and via other major media outlets.

Simpson first came to national prominence when he won the Heisman Trophy, which is awarded annually to the best college football player, in 1968. He then became one of the greatest running backs in the history of the National Football League until his retirement in 1979. Simpson also was the main face in TV ads for the Hertz car rental company and acted in films and TV shows.

In fact, the Simpson defense was able to show the jurors, a majority Black women, that the Los Angeles Police Department had ample chance to plant evidence including the “bloody glove” — especially the notorious Mark Fuhrman, a white cop caught on tape using the N-word. For more than a year the live televised trial captured the daily attention of millions in the U.S. and worldwide, even before social media via the internet was born.

This year’s Oscar-winning documentary, “O.J.: Made in America,” took more than seven hours to present the historical and political context of Simpson’s rise to prominence, the killings, the trial, the verdict and the reaction to the verdict. The director, Ezra Edelman, who is African American, showed that Simpson became a major symbol of the racist injustices that Black people as a whole face on a daily basis, especially if, unlike Simpson, they can’t afford the best lawyers money can buy. Many of those incarcerated today have not gone to trial due to being indigent, either unable to make bail or forced to accept plea deals.

Edelman also showed that Simpson lacked social consciousness compared to activist athletes like Colin Kaepernick. Simpson put his career ahead of support for the aspirations of Black people facing police brutality, lack of jobs, decent housing and more in Los Angeles. This was not a subjective commentary on Simpson, but a factual presentation.

The fact that so many Black people cheered and applauded when Simpson was acquitted on Oct. 3, 1995, was due to the acquittal being viewed as a symbolic victory — a Black man beating a bigoted system — rather than his guilt or innocence in the killings.

Edelman stated his film’s goal: “It’s a deeper portrait of a country. It’s the people who have experience being black in America and the indignities that come with that. To see the most famous and entitled person be on trial and to have so many people vested in his acquittal when he’s so not representative of the people, that is the tragedy.” (independent.co.uk, March 6)

Edelman did a powerful job of raising examples of just how racist the system — courts, laws, police and more — is toward Black people in Los Angeles. Take the tragic murder of Latasha Harlins, a 15-year-old African American, by a Korean grocer in South Central Los Angeles in 1991. The grocer was fined $500 and did no prison time, yet another example of how the courts dehumanize Black life. Many cite this particular killing, along with the acquittal of four white cops who savagely beat Black motorist Rodney King, as a major spark for the Los Angeles rebellion of 1992.

The documentary also raises the 1979 Los Angeles police killing of 39-year-old Eula Mae Love, who was shot eight times on her lawn for the “crime” of owing money on her gas bill. The Watts rebellion occurred six years later. There was also the Cointelpro police repression against the Black Panther Party and other Black political activists.

So when considering all of these decades of racist abuse not only in Los Angeles but around the country, there can be little wonder why millions of Black people especially rejoiced when O.J. was acquitted.  Before Simpson was arrested and during the trial, Black people carried signs and wore t-shirts not in only Los Angeles but around the country, saying “Free O.J.” and “Fuck the police”.  Whether he committed the killings or not was not the overwhelming sentiment.  It was the fact that a Black man beat a system riddled with racist injustice, especially police terror, a system that has repeatedly gotten away with so many crimes against humanity. The masses saw O.J.’s lawyers using the legal arena to win a political victory and our Party sided with the oppressed masses in the struggle against racism including the racist reaction to the Simpson acquittal.

But we know that one political victory doesn’t win the entire war against the capitalist system that maintains control over how people think and their lives in general.

Another important issue that this trial and documentary helped to bring to national attention was domestic violence.  There was no doubt that O.J. Simpson abused Nicole Simpson even before they were married.  The physical bruises and 911 calls made by her to the police were made public.  The LA police protected O.J. Simpson from prosecution as they do many abusers of women.  In fact, many police are known abusers themselves.

Many major articles and exposes were written during this period on how domestic violence suffered by women at the hand of their spouses and partners was the norm, not the exception throughout U.S. society regardless of nationality, age and social strata.  The role of the corporate media’s main goal is to reinforce the bigoted ideas of the ruling class.  Therefore, in their eyes, the victims and survivors of domestic violence are not all treated the same.  And this is especially true when racism plays an integral role.

An Oct. 19, 1995, Workers World article, “Unity is key to fighting racism – Who’s behind the attacks on Simpson jurors” reads in part:  “Racism and national oppression have an impact on every important social and economic issue in this country.  Take violence against women.  Many women are brutalized and even murdered every day. The fact that Nicole Brown Simpson was white and her estranged husband was Black was a big factor. Had she been Black, would the issue of domestic violence have received so much national attention? Neither the courts nor the media showed the same compassion toward Desiree Washington, a Black woman who charged [boxer] Mike Tyson with rape. In fact, she was humiliated by the judge and prosecution.”

The article goes on to say, “The same is true in the case of the Framington 8. These are predominantly African American and Latina women in Massachusetts who defended themselves against their abusive batterers. They were sent to prison for years because they were poor, were women and most of them were people of color. The racist and sexist courts consider this three strikes against these heroic individuals who killed or wounded their abusers in self-defense.”

There are more recent examples of heroic women who fought back against their abusers and paid the price for doing so by spending years in prison, including being separated from their children. For example, Marissa Alexander, a Black mother stood her ground in Florida against her abusive spouse when she was pregnant.  She was finally freed after a national campaign was launched.

Even though Simpson was acquitted in 1995 and committed no violations while imprisoned, he will continue to be labeled as a murderer, especially by the corporate media.

Once Simpson, who is now 70 years old, is released from prison, he will be tied to parole obligations until Sept. 29, 2022, if there are no violations. He will have to make monthly reports to the Nevada Board of Parole Commissioners.

Simpson will be one of 7 million U.S. adults — one in 31 of the population — who are on either parole or probation. This includes 9.2 percent of all Black adults, which is more than four times that of white adults at 2.2 percent. (pewtrusts.org)

When O.J. was acquitted in 1995, bourgeois analysts stated that the laws needed to be “reshaped” just as many say today that the capitalist system can be reformed.  As the Workers World Oct. 19, 1995, article stated, “The law does not need to be reshaped.  It needs to be replaced, along with the entire capitalist state because it is an instrument of class oppression, which includes racist oppression, to safeguard the private property of the rich against the masses. The entire criminal justice system, from top to bottom, is itself the crime. It’s not just a question of a few repressive laws here and there.”

Monica Moorehead was the 2016 presidential candidate of Workers World Party.