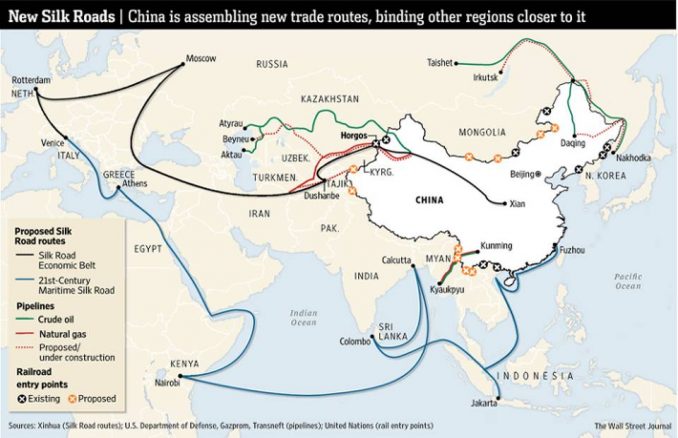 The People’s Republic of China hosted a summit May 14 called the “One Belt, One Road” initiative, also known as the New Silk Road project. Twenty-nine heads of state and representatives of 130 countries attended from across Asia, Africa, Latin America and Europe. Seventy countries signed agreements with China to participate.

The “Belt” refers to the Silk Road Economic Belt. It encompasses land route development from central China to Central Asia, Iran, Turkey and Eastern Europe. The “Road” refers to the Maritime Silk Road. This involves ports and coastal infrastructure from Southeast Asia to East Africa and the Mediterranean.

China describes the project as a revival of the ancient Silk Road with 21st-century technology. It is projected to be 12 times the size of the U.S. Marshall Plan, which rebuilt Western Europe after World War II.

Major corporate media around the world warn that the gathering signals the end of the American Century — the U.S. claim to be the world’s sole superpower. Numerous analysts suggest the project could shift the center of the global economy and challenge the U.S.-led world order.

Former U.S. Assistant Secretary of Defense Charles Freeman described the OBOR project as “potentially the most transformative engineering effort in human history. China will become the center of economic gravity as it becomes the world’s largest economy. The ‘Belt and Road’ program includes no military component, but it clearly has the potential to upend the world’s geopolitics as well as its economics.” (NBC News, May 12)

In a May 13 article, “Behind China’s $1 Trillion Plan to Shake Up the Economic Order,” the New York Times predicted: “The initiative … looms on a scope and scale with little precedent in modern history, promising more than $1 trillion in infrastructure and spanning more than 60 countries. Mr. Xi is aiming to use China’s wealth and industrial know-how to create a new kind of globalization that will dispense with the rules of the aging Western-dominated institutions. The goal is to refashion the global economic order, drawing countries and companies more tightly into China’s orbit. It is impossible for any foreign leader, multinational executive or international banker to ignore China’s push to remake global trade. American influence in the region is seen to be waning.”

Meanwhile, the U.S. infrastructure is literally falling apart. Crumbling roads, bridges, dams and schools have been given an overall D+ grade by the American Society of Civil Engineers. Investment in infrastructure, including schools, hospitals and wastewater treatment plants, is at a 30-year low.

Donald Trump, with his “America First” campaign slogan, pledged to rebuild the country’s broken infrastructure. But since becoming president, his administration has instead opted for cutting taxes on the rich while increasing the military budget. Meanwhile, the U.S.-initiated Trans-Pacific Partnership Agreement, which was designed to exclude China, has collapsed.

Where U.S. infrastructure projects are in place around the world, they are focused on building and maintaining a vast high-tech network of 800+ military bases and servicing an armada of aircraft carriers, nuclear submarines and destroyers. Each base is an expense to and an attack on the sovereignty of the host country. U.S. foreign aid ranks near the bottom of such expenditures of all developed countries, amounting to less than 1 percent of the federal budget. It is largely military aid to Afghanistan, Iraq, Israel, Egypt and Pakistan.

Nevertheless, U.S. corporate power sees all other economic development as a threat to its global domination. Its aim is to protect at all costs the irrational capitalist system.

Response to U.S. pivot to Asia

The pivot to Asia begun during the Obama administration is an aggressive military plan that includes the U.S. nuclear arsenal and the Pentagon’s new THAAD missile battery in South Korea. Its focus is containing and threatening China’s growing economic influence in the region.

U.S. military planners brag of their ability to strangle China and cut its vital shipping lanes, such as the Straits of Malacca. This narrow transit point between the Indian Ocean and the South China Sea handles 80 percent of China’s crude oil and other vital imports.

China, now the world’s largest trading nation, has responded with the nonmilitary OBOR plan that will open many trade routes through surrounding countries. Trade routes, unlike U.S. military bases, offer immediate benefit to the development of these countries. China is expected to invest up to $1.3 trillion in OBOR infrastructure projects.

Past U.S. practices of seizing the assets of countries holding substantial funds in U.S. banks meant that the $1.26 trillion that China has held in U.S. Treasury notes was especially vulnerable. Until six months ago, China was the number one investor in U.S. Treasury notes. Now China is divesting.

China has used a part of its significant reserves to establish the Asian Infrastructure Investment Bank. The AIIB plays an essential role in encouraging trade and economic cooperation with other countries in Asia, Africa, Europe and Latin America. This Chinese initiative is seen as a counter to the U.S.-dominated World Bank and International Monetary Fund.

As the Cuban news outlet Granma wrote on March 6: “AIIB aims to rescue those areas of the region somewhat abandoned by both the World Bank and the Asian Investment Bank (AIB), as well as encourage trade and economic cooperation.”

Both the IMF and the World Bank exert enormous leverage through “structural adjustment” policies. Debt repayment requires countries to cut spending on education, health, food and transportation subsidies. Their real goal is to force developing countries to privatize their national assets.

Corporate-funded nongovernmental organizations and social media campaigns claim that China will not show the same respect for the environment and human rights as the U.S. and other imperialist powers do. They claim that China might not follow environmental restrictions on loans imposed by the World Bank and IMF.

This is sheer hypocrisy. The U.S. military machine is the world’s biggest institutional consumer of petroleum products and worst polluter of greenhouse gas emissions and many toxic pollutants. Yet the Pentagon has a blanket exemption in all international climate agreements.

U.S. wars have contaminated the soil and water of vast regions under U.S. occupation with depleted uranium, benzene and trichloroethylene at air base operations and with perchlorate, a toxic ingredient in rocket propellant.

According to a Times editorial of Dec. 5, 2015, “Countries are finding they must increasingly operate in China’s orbit. The United States worries that China will use the bank to set the global economic agenda on its own terms.”

In addition to the AIIB, the China Development Bank and the Export-Import Bank of China already finance big-ticket projects in Asia and Africa. By Chinese estimates, their combined overseas assets stand at $500 billion — more than the combined capital of the World Bank and the Asian Development Bank.

China’s past decades of development and modernization and its current surpluses are what make these new global plans possible. China has an estimated $4 trillion in foreign currency reserves. Its granaries are full and there are surpluses in cement and steel.

In 1949, when the revolution led by the Chinese Communist Party took power, China was an underdeveloped, war-torn country with a largely illiterate, majority peasant population. Western and Japanese imperialist powers had looted and carved up China for their own profits. Breaking their hold was the first step in liberation, but China was deeply impoverished.

After nearly 30 years of heroic efforts to modernize the economy based on the organization and efforts of the masses, the Chinese Communist Party in 1978 opened the country up to some forms of capitalist ownership and foreign capitalist investment.

This still risky policy has continued for nearly 40 years. It has allowed Chinese millionaires and even billionaires to develop and spread corruption. Foreign capital, ever hopeful of totally overturning the Chinese state, invested because profits could be made. But the Communist Party has used the years of capitalist investment to build up a modern, state-owned infrastructure alongside the growth of private capital.

Now China ranks as a developing country with a majority urban population living in modern, planned cities. The working class is now the largest social class in China. Wages for shop-floor workers in China have tripled in the last decade to become the highest in developing Asia.

China adopted a new industrial policy in 2015: “Made in China 2025,” which intends to upgrade manufacturing capabilities for high-tech products. These plans are supported by $150 billion in public or state-linked funds. It is this kind of long-term socialist planning that is the motor behind China’s new One Belt, One Road plan.

While the U.S. attempts to block these needed infrastructure efforts, move missiles and aircraft carriers off China’s coast, and send the lowest possible diplomatic delegation to China for the OBOR summit, Washington had the audacity and arrogance to warn China against north Korean participation. The DPRK sent a high-level delegation.