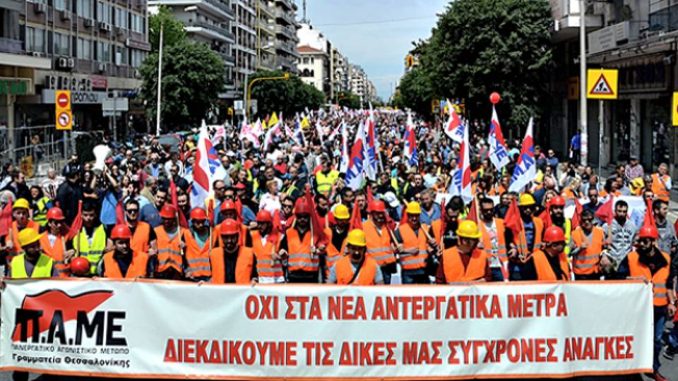 Even though there have been many general strikes in Greece in the past 10 years, the one on May 17 stands out as one of the most successful. Some workers, like the sailors who run the ferries, struck the day before, the day of and took their time going back to work the day after.

Relying on its parliamentary majority, the Syriza government rammed through a harsh, draconian austerity program May 18. This meant Syriza’s act contradicted its electoral platform of 2013, which reads: “From the very beginning, the government’s task was to end the extreme austerity policy in Greece.” (tinyurl.com/pnjfc8r)

Greece’s economy has shrunk 27 percent since 2010, mainly under the impact of austerity measures imposed by the European Union and the International Monetary Fund. Overall unemployment is at 23.5 percent and youth unemployment is nearly 50 percent.

According to the organization diaNEOsis, nearly 1.5 million Greeks — 15 percent of the population — currently live in “extreme poverty,” with just enough income to survive, which means pay for food and shelter. (tinyurl.com/lqob84y)

PAME, the All Workers Militant Front, which is closely associated with the Greek Communist Party (KKE), was very active in getting its members and supporters out to demonstrations that reinforced the strike on May 17. According to the French newspaper Le Monde, 12,000 people came out in Athens, 8,000 from PAME.

According to photos on the PAME website, there were marches in Thessaloniki, Heraklion, Larisa, Giannena, Chania, Volos, Agrinio, Karditsa and Rodos — basically all over Greece, including islands in the Aegean, as well as in its two largest cities.

Speaking in Athens, General Secretary of the KKE Dimitris Koutsoumpas said, “The class war is now in progress, it is a marathon, not a rifle shot in the air. The class war must be a daily and continuous one. The harsh anti-people measures, the Fourth memorandum along with the previous memorandums must be thrown in the dustbin of history and the only ones who have the authority to do this are the Greek people, the labor-people’s movement.”