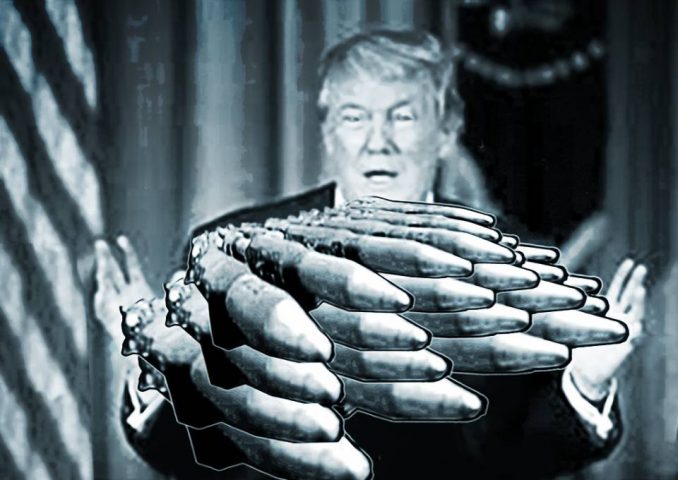 Trump is opening a full-scale assault against the workers and oppressed. The anti-Russia campaign is the last thing the movement should be pursuing in its struggle against him.

Donald Trump came back from his overseas trip to Saudi Arabia, Israel and Europe resuming his plans to launch full-scale attacks on the workers and the oppressed through his budget, his health care bill and tax cuts for the rich.

That being said, he has also managed to make two major foreign policy moves that push U.S. imperialist policy further to the right.

In Saudi Arabia, he formalized and weaponized an anti-Iranian alliance with the House of Saud and the royal oil puppets in the Gulf States. The U.S. has had an alliance with the Saudis for 70 years. The reactionary monarchy has been a pillar of U.S. imperialism, the Pentagon and Big Oil, with four huge U.S. military bases in the country. This new outsourcing to the Saudis of U.S. military intervention is a further turn toward U.S. proxy war and aggression in the region.

In addition, Trump managed to do severe damage to the Washington-Berlin­-Paris alliance as expressed in NATO. He went to Brussels and chewed out the European imperialist rivals for being deadbeats — i.e., not paying their NATO bills. This is great-power chauvinism run wild.

The U.S. ruling class and the Pentagon will have to ponder this. Angela Merkel, chancellor of Germany, made a speech after Trump’s trip saying that Europe would have to rely on itself.

U.S. imperialism has relied on NATO for decades. NATO has troops in Afghanistan. It was key to the destruction of Yugoslavia. NATO was used to stop the Portuguese revolution in 1974 and the French workers’ uprising in 1968. French and British imperialism hold down the struggle in Africa using NATO.

The Pentagon needs NATO and they know it. Secretary of Defense Gen. James Mattis and Secretary of State Rex Tillerson have both pledged loyalty to the alliance.

From the point of view of the workers and the oppressed, anything that weakens imperialism is a positive development. We should not moan over Trump’s boorishness and undiplomatic insensitivity. That is a problem for the ruling class.

A further problem for big sections of the corporate ruling class is Trump’s refusal to say that he will stay with the Paris climate accords. Many of the Fortune 500 corporations, such as GM, Microsoft, DuPont, Amazon, etc., are moving toward low carbon and renewable energy as a matter of policy. Almost half of the Fortune 500 companies have adopted at least one climate or clean-energy goal, with 23 of them pledging eventually to run their businesses on 100 percent renewable energy, including Walmart, Bank of America and Google.

Whether or not these pledges are fulfilled, it represents a recognition by the bosses that climate change is a real threat to them and their profits. Even companies in Appalachian coal country are not using coal any more. (New York Times, May 26) Key sections of the ruling class are finally taking seriously the climate danger, just when Trump wants to wreck any progress in environmental protection.

These developments may intensify the contradictions in the ruling class here and feed ruling class opposition to Trump. They fear that getting rid of him could create further instability in the political system. Again, that is their problem. The job of the workers and oppressed is to take advantage of the situation and expose the capitalist system for what it is.

Back from his overseas trip, Trump faced the relentless anti-Russia campaign that anti-Trump forces in the ruling class are using to push him back or bring him down.

This is a deepening of the great “Russia” diversion in the struggle against Trump. At a time when Trump is opening a full-scale assault against the workers and oppressed, the anti-Russia campaign is the last thing that the movement should be pursuing in their struggle against Trump. The Democratic Party leadership is in the vanguard of this diversionary anti-Russia campaign.

He is planning to cut $800 million from Medicaid, which would destroy rural hospitals and nursing homes. He wants to cut back drug clinics, cancer research, environmental protection, job safety and student loan forgiveness, among many other things. His budget would wipe out Meals on Wheels, cut SNAP (food stamps) by billions of dollars and attack women’s health care around the world. And this after returning from a foreign trip where he served as a front man for big business and the Pentagon war makers.

At the very moment that his administration was planning massive tax cuts for the rich and major cutbacks for the poor, Trump was in Saudi Arabia heaping praise upon one of the most reactionary monarchies in the world. He was wined and dined and stroked by the royal princes of the feudal-capitalist patriarchal Saudi clan.

Women are the virtual property of men in Saudi Arabia. Trump made not even a mention of the status of Saudi women.

The princes rolled out the red carpet, gave him a sword to dance with, projected a 175-foot picture of him on the side of a building, drank toasts to him and had photo ops of him sitting surrounded by royalty and luxury in the palace in Riyadh.

In return, the monarchy got $110 billion worth of weapons to wage a war of aggression against the people of Yemen and raise the military threat to Iran.

The military-industrial complex, the Pentagon death machine, was able to sell Abrams tanks, combat ships, missile defense systems, radar, and communications and cyber security technology, among other things. The Saudis are also getting a billion-dollar THAAD (Terminal High Altitude Area Defense) system like the one the Pentagon just rushed into south Korea, as well as $500 million worth of precision-guided bombs.

Much of this military package was already approved by the Obama administration last fall. Obama offered the Saudis $115 billion in military aid (Reuters, Sept. 16, 2016), but held up on sending precision-guided bombs and other weapons. Trump just went to Saudi Arabia to bask in the deal. Trump’s Pentagon-guided White House and cabinet, with three ranking generals, included the precision bombs even as the Saudis are escalating the massive killing of civilians in Yemen. The generals also added in the THAAD system.

Big business and banking alongside Trump

In addition to the military contracts, the Saudi sovereign wealth fund also signed contracts with U.S. corporations worth hundreds of millions of dollars.

Dozens of the biggest names in U.S. business went in Trump’s entourage. Jamie Dimon of JPMorgan Chase, Michael Corbat of Citigroup, James Gorman of Morgan Stanley, Andrew Liveris of Dow Chemical and Stephen Schwarzman of Blackstone were among the U.S. chief executives attending a business forum, along with General Electric vice chair John Rice. The heads of military contractors Lockheed, Boeing and Raytheon also went along.

The Saudi-U.S. CEO Forum was held on the same day that Trump met King Salman of Saudi Arabia. The Saudi chief executives attending included Amin Nasser of Saudi Aramco and Yousef Al-Benyan of Sabic, a chemicals, plastics and fertilizer group that plans to build the world’s largest ethylene plant in Texas, jointly with Secretary of State Tillerson’s former firm, ExxonMobil.

Trump and Tillerson tried to justify these deals as creating jobs. Trump made a grinning triumphant remark about his deals creating “jobs, jobs, jobs.” Actually, the Trump health care plan and his budget are job destroyers. Cutbacks in Federal employment endanger tens of thousands of government workers, from the Environmental Protection Agency and National Institutes of Health to Forest Protection Service, the Labor Department, the National Endowment for the Arts and other targeted government departments. Trump wants to cut $54 billion in federal spending in order to make up for the increase of $54 billion to the Pentagon.

His health care cutbacks will not only throw 23 million people off the health care rolls but will also throw millions out of work. Health care created more jobs than any other sector in 2016, helping to drive total annual job growth to 2.2 million, according to data from the Bureau of Labor Statistics.

A report released by the Commonwealth Fund and the Milken Institute School of Public Health at George Washington University found that repealing key provisions of the Affordable Care Act, including the insurance premium tax credits and Medicaid expansion, could lead to 2.6 million people losing their jobs by 2019. By 2021, nearly 3 million jobs in health care and other sectors could be lost. (Modernhealthcare, Jan. 6)

Trump rages against China and Mexico for destroying jobs at home. He is scapegoating these countries in order to whip up workers and pander to his racist base. Trump says protectionism is the answer. Actually, the real job destroyer is technology. Far more jobs have been destroyed by automation than by offshoring. One authoritative study says that 13 percent of job losses in the U.S. come from trade while 87 percent have been lost to automation. (New York Times, Dec. 21, 2016)

Trump has no answer to other bubbling crises. For example, student loans have reached $1.3 trillion. In the first quarter of 2017, consumer debt rose to $12.73 trillion, exceeding its peak in the third quarter of 2008. (New York Times, May 17)

Booming auto sales have more to do with low rates and easy financing than they do with the urge to buy a new vehicle. In the last few years, car buyers have borrowed nearly $1 trillion to finance new and used autos. Much of that money was lent to borrowers who have bad credit ratings and might not be able to repay the debt. There has been a recent surge in delinquencies among subprime borrowers whose loans were packaged into bonds and sold to investors. ­(Counterpunch, March 18)

Expanding the debt of the masses is how capitalism is staying afloat. The expansion of debt is calculated to compensate for overproduction in the economy. It helps keep people buying things and thus keeps the circulation of capital going. It keeps profits rolling in, but sooner or later these various debt bubbles will burst.

How can students who have tens of thousands of dollars in debt buy much, let alone start a household? How can workers who owe the auto loan sharks money buy enough to create jobs for other workers? How can people who are up to their eyeballs in credit card debt keep the system afloat by further purchasing? There is no public tally for debt due to health care costs, but a leading cause of household debt is often the astronomical cost of medical care.

Trump has no answer for all this. It is doubtful he is even aware of it, let alone trying to deal with it. His preoccupation is with making money now and getting re-elected in 2020.