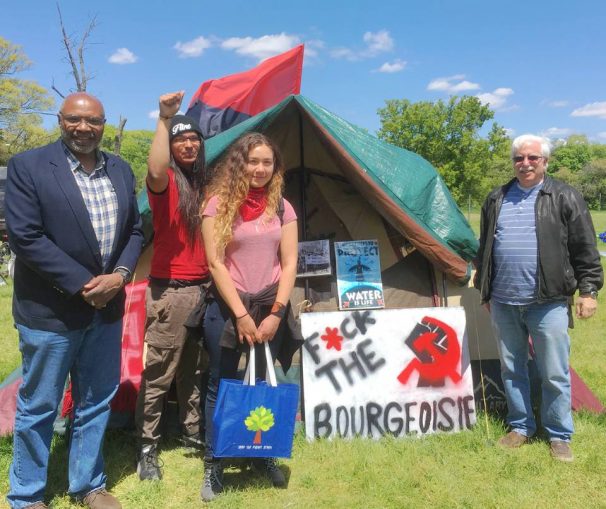 Dependency on bottled water has become a way of life. Celebrity and charity donations have slowed. Flint is rarely in the media outside of Michigan, although there has been publicity around a movie about Flint’s women activists. It stars Queen Latifah.

Yet despite three years of genocidal neglect, Flint is still attracting new allies.

On April 25 in 2014, the city’s water department disconnected from Detroit Water and Sewerage, its provider for decades. Flint residents were unknowingly put in grave danger when the city began getting its water from the heavily polluted Flint River.

People living in Flint noticed right away that their water had suddenly turned brown and had a foul odor. Complaints were repeatedly dismissed for more than a year, until an independent research team from Virginia Tech exposed elevated lead levels in the water. Pediatrician Dr. Mona Hanna-Attisha warned that Flint’s children had dangerously high blood lead levels. This atrocity only came to light because of the persistence of diligent activists, some of whom saw their own children display visible signs of lead poisoning.

The lead poisoning occurred because the governor-appointed emergency manager running the city decided to save money and not add anti-corrosive chemicals to the water. This is a routine procedure to prevent lead-based pipes from corroding and leaching lead into the water supply. The Flint River water was especially corrosive because of the pollutants that corporations, primarily General Motors, dumped in the river for decades. Besides lead-poisoning a whole generation of children, the emergency manager’s decisions led to 12 deaths from Legionnaires’ disease.

Emergency managers can be appointed over a city or school district under Michigan’s Public Act 436. This racist, union busting, pay-the-bankers-first law was passed by the legislature as a slight variation on Public Act 4, which voters defeated in 2012. Some 50 percent of Black Michiganians have been under emergency management at some time, compared to only two percent of white residents.

Although Flint has switched back to Detroit water, the water is still not considered safe to drink without a faucet filter. Nor is lead the only toxin that water consumers have been exposed to. Showering and bathing continue to cause skin rashes, hair loss and breathing issues, and the state has done nothing to address these concerns. To complicate matters further, researchers have recently determined that while filters block toxic metals such as lead and copper, they are breeding grounds for bacteria.

It has taken this long for the right-wing legislature to approve sending $100 million in federal funds to fix Flint’s pipes. The March 28 settlement of a federal lawsuit filed by the American Civil Liberties Union of Michigan and the Natural Resources Defense Council on behalf of Melissa Mays — the mother of three who leads Water You Fighting For — will bring another $100 million in state aid and restore delivery of bottled water and filters. Only militant activism forced the government to cough up any of this money. Meanwhile, the program to replace lead service lines is proceeding at a snail’s pace, with only 600 of 39,000 pipes switched out.

Flint households have some of the highest water bills in the country. A temporary credit, extended by the state after Gov. Rick Snyder’s criminal role in the crisis became a major scandal, has been terminated. More than 8,000 delinquent customers could lose their homes through tax foreclosure, because their water bill has been attached to their property tax obligations. Some have refused to pay for poisoned water; others simply could not afford the high bills. Flint is a majority Black city with half of all households officially below the poverty line.

From Standing Rock to Flint, water is life

Many of the resisters at Standing Rock, N.D., are part of the 16 new encampments that have been established across the country since the brutal eviction of water defenders there, including Camp Promise in Flint’s Kearsley Park.

“Camp Promise was created after April 7, after some of our organizers went out to Standing Rock, while the organizers who stayed were also instrumental in drumming up local and online awareness and support from Michigan,” explained Aylin Altinok, a Turkish water protector from Michigan who spent time in Standing Rock. “Our goals are to bring a resolution for the Flint water crisis by conducting peaceful demonstrations, community service, etc., while also providing a platform for third-party nonprofits and individuals to improve the quality of life for those living in the community.”

The camp has grown to about 20 tents with about 30 campers. Supporters visit the camp on a regular basis.

On May 12, Camp Promise demonstrated outside City Hall to protest the decision to subject delinquent customers to tax foreclosure. A delegation from Detroit’s Moratorium Now! Coalition to Stop Foreclosures, Evictions and Utility Shutoffs came to Flint. Ann Arbor activists were also there visiting.