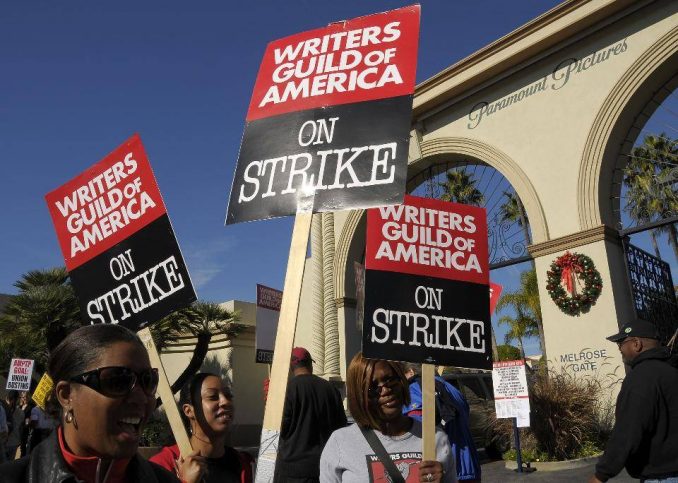 When 96.3 percent of the voting members of Writers Guild West and East authorized a strike in late April if negotiations didn’t go their way, the entire entertainment industry became on edge, reported Variety on May 4. Many remember the writers’ 100-day strike in 2007-2008, which set the Los Angeles economy back by more than $2 billion.

That strategy paid off big time on May 2, when union negotiators won “unprecedented gains” that they attributed to members’ “near-unanimous backing” of the strike threat. In a letter to the union’s more than 13,000 members, they asserted: “We were able to achieve a deal that will net this guild’s members $130 million more, over the life of the [3-year] contract” than what the Alliance of Motion Picture and Television Producers had offered. (New York Times, May 3)

Specifically, the WGAW and WGAE won gains in minimum salaries, a major AMPTP bailout of the union’s bankrupt health care plan, a 15 percent increase in Pay TV residuals and a precedent-setting definition of “short seasons.” That means that if writers work more than 2.4 weeks on an episode in a limited series (six-week seasons rather than 22 weeks), they are eligible for overtime.

Will this contract set a precedent for other Hollywood unions? The actors’ contract with producers expires on June 30. Stay tuned.

United Parcel Service, which boasts of being the world’s largest package delivery company while banking billions in profits annually and showering multimillion-dollar raises on board members, wants to cut vital health benefits for its 12,000 air maintenance workers and retirees. (PR Newswire, May 1) This is an insult to the aircraft engineers and related technicians, represented by Teamsters Local 2727, who perform grueling, health-threatening labor, like lugging heavy machinery and aircraft parts and being exposed to toxic exhaust and chemicals during 24/7 shifts that keep UPS flying.

On May 1, these heroic workers published their righteous contract demands in an open letter to UPS CEO David Abney, in the Atlanta Journal Constitution and Louisville Courier-Journal to coincide with the company’s shareholders’ meeting in Atlanta. (Teamsters Local 2727, May 1)

Their demand letter also coincided with the Kentucky Derby on May 6. In a spectacular show of power and determination, a pro-union banner flew above the event (pictured), highlighting the fact that the UPS CEO and his board get fed while planning to starve the workforce.

The 1,800 field and cable technicians in the Brotherhood of Electrical Workers Local 3 persist in their struggle with Charter Spectrum over health care, pensions and a fair contract. (NY Daily News, May 13) Since March 28, Charter Spectrum has tried to break the strike using divide-and-conquer tactics, blaming it on Local 3 and individual workers — anything but their own corporate greed. But the union, its members and other unions know better.

A ray of solidarity shone when a representative from New York’s community action group Parents to Improve School Transportation delivered a message on May 9 from the Boston School Bus Drivers, United Steelworkers Local 8751. The letter pledged unity with the Local 3 struggle and wished Local 8751 members “could be on the picket lines everyday to defend you and the labor movement from this vicious Wall-Street-funded, Trump-inspired Corporate Warfare.” Local 8751 also voted unanimously to donate $500, which will surely come in handy as this battle continues.

Fighting for pay equity in NYC

Legislation introduced by Public Advocate Letitia James and passed by the New York City Council on April 5 bars employers from asking about job candidates’ salary history during the hiring process. James based the law on her office’s 2016 report that women workers in the city make approximately $5.8 billion less in annual wages than men. The gender pay gap is worse for women of color: Latinas make 54 percent less than white men, Blacks 45 percent less and Asians 37 percent less.