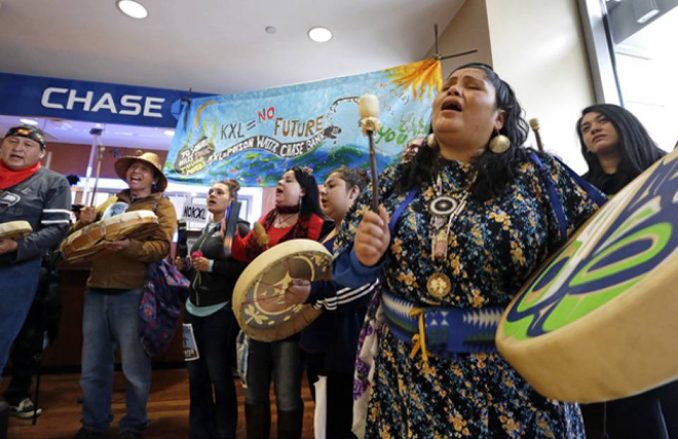 Scores of activists from 350Seattle shut down 13 Chase banks in Seattle on May 8 in alliance with Indigenous people. The action was a confrontation with JPMorgan Chase and other banks to stop their lending for the Keystone XL pipeline, which would extend from Alberta, Canada, into the U.S., carrying oil extracted from Canadian tar sands.

Indigenous leaders have pointed out that tar sands oil uses three times more energy to extract than regular oil, thus being a cause for global warming. The 1,700-mile Keystone would run across the water-rich Oglala aquifer to southeast Nebraska.

Demonstrators fanned out around noon to Chase banks across the city. At some banks, protesters did skits in the bank in hazmat suits. Other banks were occupied by singing Native drummers. Protesters, holding signs and banners, locked themselves down and made statements at other branches. They chanted, “No coal, no oil! We want our money back!” referring to the billions of dollars in bailout money the banks were given by the federal government during the last recession.

Once the cops finally caught up with all of the actions, 26 people were arrested and jailed. The action received local, national and some international press coverage.

More than 121 First Nations, along with other Indigenous organizations, have signed the Treaty Alliance Against Tar Sands Expansion. It calls for the banks to divest from all companies building the Dakota Access Pipeline, the Keystone XL (to be built by TransCanada) and the three other pipeline trunks fanning out from the tar sands.

We live on a planet beset by droughts, forced migration, melting ice caps and rising seas. The Donald Trump administration’s recent decision to approve the Keystone XL has increased the crisis. It’s basically “game over for the climate,” according to NASA Goddard Institute for Space Studies Director James Hansen, if the Keystone is built to haul the tar sands oil. (New York Times, May 9)

Without the support of the big banks, oil companies couldn’t afford to build tar sands projects like Keystone. And Chase is connected to the oil industry as much as any of them.