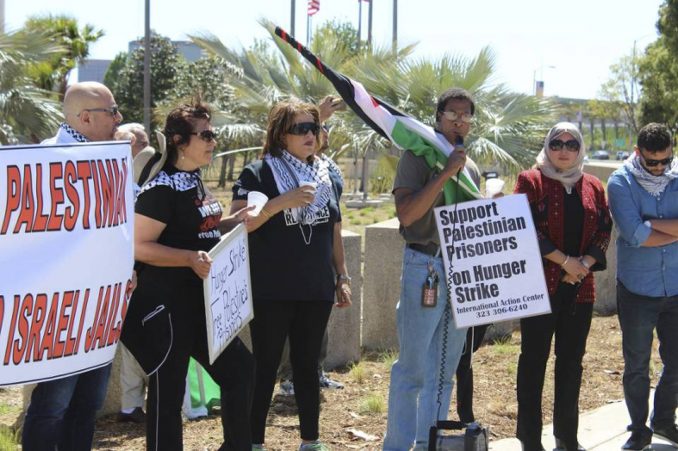 John Parker of the International Action Center spoke at a May 13 protest in solidarity with 1,500 Palestinian hunger strikers who were on the 27th day of a salt water diet. The protest was held at the Westwood Federal Building in Los Angeles. It was organized by the Arab-American Committee for Support of the Palestinian Prisoners Hunger Strike. The rally was emceed by Amani Al-Hindi Barakat.

On the far right in the picture is Aarab Marwan Barghouthi (in a blue shirt and wearing sunglasses), who joined the demonstration. Aarab is the son of Marwan Barghouti, a Palestinian political prisoner and leader of the current hunger strike.

Parker spoke at the protest and participated in the salt water challenge, now popular on social media, to show solidarity with hunger strikers on the same diet. He challenged so-called progressives who continue to support the U.S. military and financial assistance that allows Israel’s apartheid, occupation and torture in government prisons, to also take the challenge.