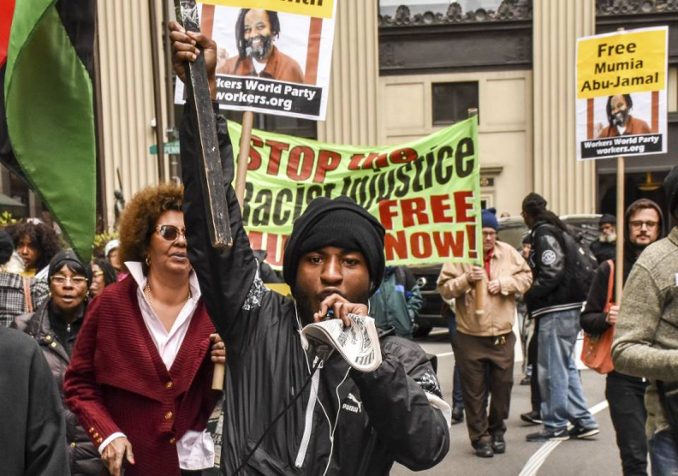 Philadelphia – A petition filed on behalf of political prisoner and journalist Mumia Abu-Jamal, seeking a new appeal in his decades-long case, was heard in the Pennsylvania Court of Common Pleas on April 24. Abu-Jamal was represented by Christina Swarns and Judith Ritter from the NAACP Legal Defense Fund.

While dozens of Abu-Jamal supporters packed the courtroom, more demonstrated outside the Criminal Justice Center in downtown Philadelphia.

The basis for the new hearing was a 2016 U.S. Supreme Court precedent-setting decision, Williams v. Pennsylvania. The decision held that Terry Williams had been denied his due process right to a hearing free of bias. This was because Pennsylvania Supreme Court Justice Ronald Castille, who ruled on his appeals, also played a significant role in the case while Philadelphia District Attorney.

Appeal based on role of Justice Castille

Swarns challenged the Commonwealth’s claim that Castille had “played no personal role” in Abu-Jamal’s case. He noted that the state had made the same arguments in the Williams’ case before a discovery motion filed on his behalf exposed that the DA’s office was lying. Abu-Jamal’s attorney asked Judge Tucker to rule on a discovery motion to review the DA’s records of the case.

DA Eisenberg, a protégé of Castille, focused most of his arguments on trying to challenge the timeliness of the appeal and seeking to deny or minimize the extent of Castille’s involvement in Abu-Jamal’s case. Tucker eventually responded, asking Eisenberg to explain just how the case could have moved forward without Castille’s approval.

The DA ended his presentation by arguing about just how much access to due process Abu-Jamal should receive. He stated that granting Abu-Jamal’s case would “be a huge impact” on the higher courts. “At some point you just have to draw the line.”

Swarns responded by pointing out that the Commonwealth’s concern cannot be about how long Abu-Jamal’s appeals process might take or that he would receive “too much justice.” She stated that at minimum Abu-Jamal was entitled to a review of the DA records on his case to determine the extent of Castille’s involvement. “If the review shows that Castille wasn’t involved, then we won’t need to be concerned about how much justice Mumia Abu-Jamal receives,” Swarns concluded.

Tucker concluded the hearing stating that a decision would be made shortly.

A lively press conference outside the court building followed the hearing. Abu-Jamal’s attorneys reported on what had happened. Other speakers, including Pam Africa and Suzanne Ross,  addressed the need to widen support for Abu-Jamal.

Monica Moorehead of Workers World Party called on the young people who have been in the streets fighting police brutality to get involved in the struggle to free Mumia and to raise his case at upcoming May Day actions.

“We need more young revolutionaries out here taking up the cause of Mumia Abu-Jamal…. We need your energy and your revolutionary spirit…. Your involvement could be the decisive issue to free Mumia.”

Live streaming of the rally can be seen at youtube.com/watch?v=QKomagCTIiE.

The large number of youth helping lead the march that followed showed that they heard Moorehead’s call. Marchers circled City Hall and rallied in the cold and damp weather for hours. They held an indoor event, “Resistance Matters,” that evening at the Arch Street United Methodist Church.

Speakers there addressed the legal issues, the victorious two-year struggle to get hepatitis C medications for Abu-Jamal and the ongoing fight over toxic water in Pennsylvania prisons and Philadelphia public schools. They also wished a “happy birthday” to Abu-Jamal, who turned 63 on April 24.

Abu-Jamal was scheduled for execution in 1995 and 1999 but was saved by mass international protests. In 2012, after years of mass pressure, the courts removed him from death row and re-sentenced Abu-Jamal to life imprisonment without the possibility of parole.

Just weeks ago, supporters forced the prison system to provide Abu-Jamal with life-saving medicine for hepatitis C, after a two-year-long campaign in court and on the streets. This latest court proceeding was another battle in the 35-year effort to win justice and freedom for one of the world’s best-known political prisoners.