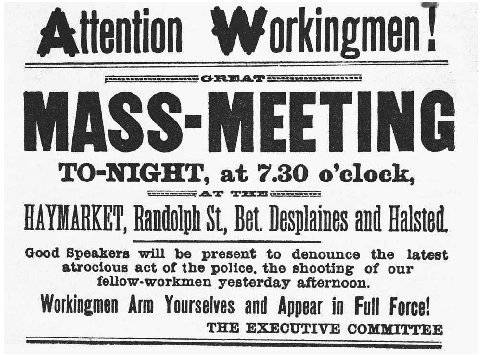 Chicago – It is often noted that May Day had its origins here in Chicago. Two days after 40,000 workers marched for the 8-hour day on May 1, 1886, company detectives shot seven striking workers picketing the McCormick Harvester reaper factory.

At a massive protest rally at Haymarket Square the next evening, a provocateur’s bomb killed several police, leading to the frame-up of eight anarchists, most of whom were not even at Haymarket Square that evening. Four of them were hanged. This familiar history is recited at annual May Day celebrations everywhere.

But it is not often noted that Eleanor Marx — daughter of Karl Marx, the communist movement’s chief theoretician who had died three years earlier — visited Cook County Jail in Chicago in November 1886 and met with the imprisoned defendants as they awaited resolution of their futile appeals. The younger Marx, who was on a speaking tour of the United States to promote socialist ideas and organization, demanded justice for the condemned Chicago anarchists at every stop.

Upon her return home to London, she urged the working class in England to “strengthen the hands of their [U.S.] American brethren by holding meetings and passing resolutions protesting against the judicial murder of these men and demanding a new trial.”

Although Eleanor Marx was strongly opposed to anarchist ideology, she believed it critical that communists defend all workers who suffer repression at the hands of the capitalist state. As she and her partner Edward Aveling wrote in their essay, “The Chicago Anarchists,” “Our position of antagonism to the teachings of Anarchism strengthens our position in asking justice for the condemned men.”

On this May Day, recalling Eleanor Marx’s appeal for working-class solidarity against capitalist repression can only strengthen our resolve to build a mass movement of the workers and oppressed to fight for socialism.