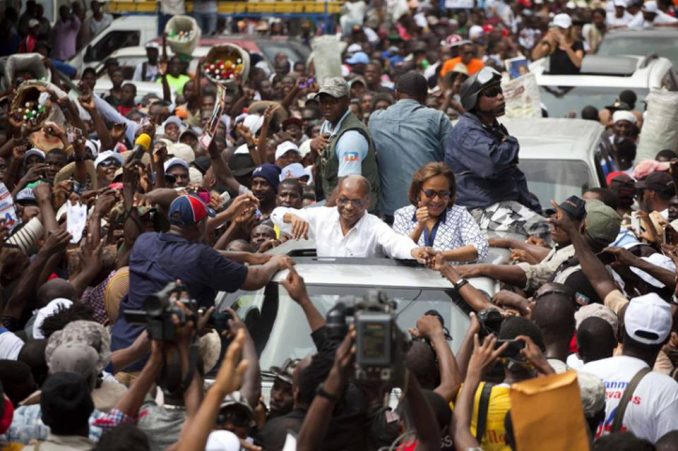 “The U.S., U.N. and other so-called ‘friends of Haiti’ brought about the electoral coup d’etat,” Dr. Narcisse said. “The election of 2015 was thrown out because of widespread election fraud. Then, the rerun in 2016 was stolen again.

“But Nou Pap Obeyi (We Will Not Obey) — this is a slogan our people believe in, because Haitians, who overthrew French colonialism and slavery in 1804, will never accept foreign domination.”

There was music by the Vukani Mawethu choir and the revolutionary words of drummers Phavia Kujichagulia and Val Serrant. A Black community security service, Community Ready Corps, clad in black uniforms and berets, provided security for the event, protecting the special guest from the real dangers that democracy fighters in Haiti face every day and could face here. 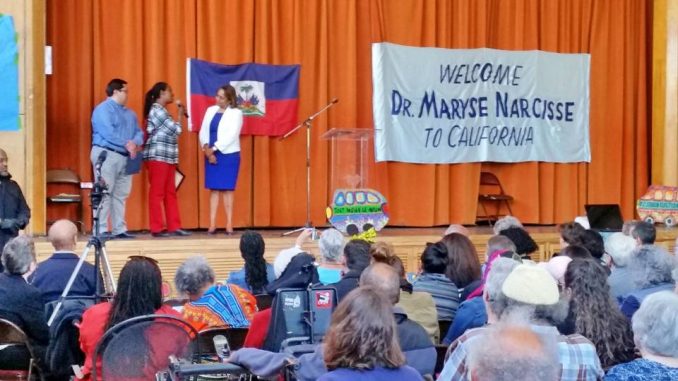 Over the past two years, Haiti’s popular movement has fought a relentless campaign for free and fair elections in support of Dr. Narcisse’s candidacy, with tens of thousands in the streets almost daily for many months. They fought to overturn the results of fraudulent elections that gave the presidency to a U.S.-backed, right-wing candidate.

A longtime Lavalas militant, as well as a medical doctor, Dr. Narcisse has been in the streets with the people day after day, as they face police bullets, tear gas, water hoses and clubs. “When you give voice to the demands and grievances of the people,” she said, “you win their hearts.”

She pointed out that “Haiti is an unequal country, where 1 percent of the population own 45 percent of the wealth, and most live in abject poverty, with high unemployment. The economy is at a standstill. The price of food and fuel keeps going up. There is poisoned water, flooding and deforestation. Over 200,000 children cannot go to school, because most primary schools are private.

“There is constant meddling by the U.S. and the United Nations occupation force, creating instability,” Dr. Narcisse continued. “They don’t want us to have our own strong government serving our people. These self-appointed ‘friends of Haiti’ want to hold onto the power so they can serve international interests. That is why they intervene and steal our elections.”

The small, right-wing, Haitian elite controls the government, said Dr. ­Narcisse, and there are signs of a return to the methods of the Duvalier dictatorship, which ruled Haiti from 1957 to 1986. “But in 1986, the people rose up and overthrew Baby Doc Duvalier,” she said. “As in those times, today we are reorganizing, holding large mass meetings, educating and mobilizing our people — because the people want to resist and they will never give up.”

The program, organized by the Haiti Action Committee, was a benefit for the Haiti Emergency Relief Fund. See haitiemergencyrelief.org.