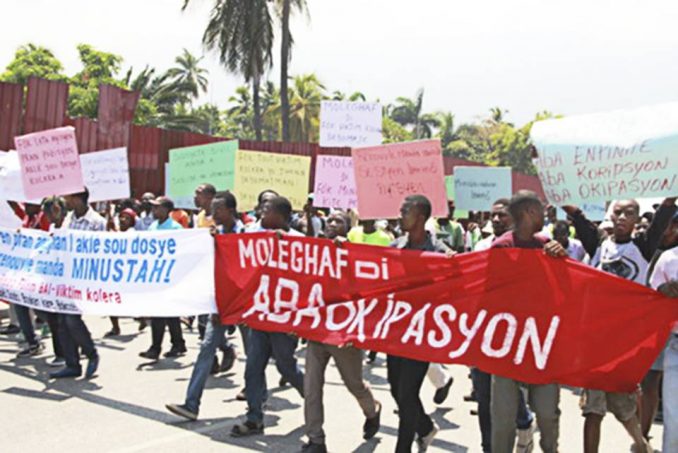 Haitians say ‘Down with the occupation!’

This move is presented as a cost-cutting measure by U.N. officials such as Sandra Honoré, the special representative of the U.N. secretary general in Haiti. According to Papda (Platform for an Alternative Development in Haiti), Minustah cost $8 billion during its 13-year existence. (AlterPresse, April 17)

But beyond the direct costs to the U.N. and its donors for this occupation, the presence of Minustah has imposed a tremendous burden on Haiti.

In 2010, a U.N. contingent with bad sanitary practices — dumping its feces into Haiti’s largest river — introduced cholera to Haiti. Since then 10,000 Haitians have died from cholera and hundreds of thousands have been sickened. Over the years there have been a number of incidents in which Minustah has acted like the military occupation force it is.

During the U.N. debate on Minustah becoming Minujusth, Nikki Haley, the U.S. ambassador to the U.N., said, “[Minustah’s] support of the government has been essential in ensuring a secure and stable environment. It has also provided invaluable assistance in aiding the Haitian people in recovering from a number of natural disasters. (April 11”)

Haley’s version of “alternative facts” on this issue and others shows she is trying to be a good puppet for spreading U.S. imperialism’s lies.