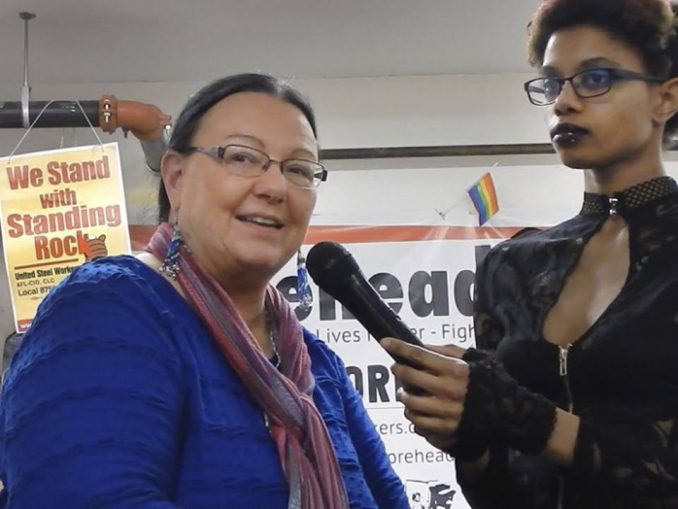 Excerpts from a talk given by Mahtowin Munro of the United American Indians of New England at the International Working Women’s Day program of the Boston Branch of Workers World Party and the Women’s Fightback Network on March 24.  Munro is also lead organizer for Indigenous People’s Day in Massachusetts.

I am inspired by Indigenous women who have been great warriors or scholars or leaders. But we have so many amazing Indigenous women past and present who hold our families together, our own mothers and grandmothers and aunties, who show tremendous courage and strength every day even if they did not become the first lawyer or first tenured professor or ride a horse and lead everybody into a big battle against white people.

When I think about International Women’s Day, I think about a lot of women who went before, more than we could name here, women whose names are not known, because some of our history has been stolen from us.

When I am talking about women, I want to explicitly say that I am including trans women. It is important to celebrate the resurgence of Two Spirit leadership that is occurring, with a strong Two Spirit presence at Standing Rock and many other places.

Women and Two Spirit people have been bearing the weight of colonialism in so many ways, for so long.

When Columbus and Cortés and the Pilgrims and all those other invaders came, they had no understanding of the land. In fact, they saw it as something to be tamed and conquered. Their contempt for the land was matched by their greed and by their violence against women and Two Spirit people.

This violence has not stopped for a single day. Black and trans people are wholesale murdered this year and every year. There are thousands of missing and murdered Indigenous women, girls and Two Spirits throughout the Americas. Our relations are sold into the “man camps” at fracking and pipeline sites or shipped out on boats from ports such as Duluth, Minn.

The leadership of women at Standing Rock was not new. Women have always been leading the way. However, the settlers intentionally undercut our leadership and would only deal with men as leaders. In more recent times, the media have often ignored the work of women and focused on male leaders. But it was impossible for that to happen at Standing Rock.

I have heard a few people say that we lost, that nothing was gained at Standing Rock, because the water protectors did not succeed in shutting down the construction of the Dakota Access Pipeline. That is false.

Nothing will ever be the same! The unprecedented unity of Indigenous peoples from throughout the world has strengthened the Native struggle in a thousand ways. And there was an extraordinary outpouring of support from non-Native people. Thousands of people traveled out there, and thousands marched and raised money and found other ways to support.

The Trump administration greenlighted the Dakota Access Pipeline project, and oil may run through any day now. But the struggle has spread. Fights against pipelines and all extractive industries in the Americas began long before the Dakota Access struggle, and they will continue long after, too.

Our struggles are deadly serious. We are fighting for water, for life, for future generations. It is no exaggeration to say that our beautiful planet, our only planet, is in danger of dying. And we are running out of time.

The fundamental right to clean water flows through many communities and many struggles right now. The people of Flint, Mich., are still suffering. Water is continuing to be shut off in Detroit and Baltimore and other cities, predominantly in Black neighborhoods. Migrants in border colonias, and farm workers and people in rural Black communities, all deal with unsafe water. On the Navajo reservation, 40 percent of people do not have drinkable water, and there is uranium even in the little babies’ bodies there. More than 100 Native Nations in Canada do not have drinkable water.

“Water Is Life” is not just a slogan. Defending our planet is not a “bougie” white thing, although it can certainly feel that way looking at many environmental nongovernmental organizations. Poor people, Indigenous peoples, people of color are most impacted by environmental devastation. This is OUR struggle.

I think we also need to actively participate in the construction of alternatives to these systems. I see the work of the Zapatistas doing that down in Chiapas, for instance.

We need to work together and learn from each other and the struggles of the past, to follow the example of Standing Rock. The hundreds of those arrested include many youth and elders and many, many women. As the water protector camps were finally cleared entirely in late February, one of the last arrested was Regina Brave, who is 80 and was also a veteran of the Wounded Knee takeover in 1973.

There is a war against us. The war did not just start when Trump was elected. Immigrants, Muslims, disabled people, Black and Latinx and Asian people, Indigenous, trans and Two Spirit people — we must be in solidarity with each other.