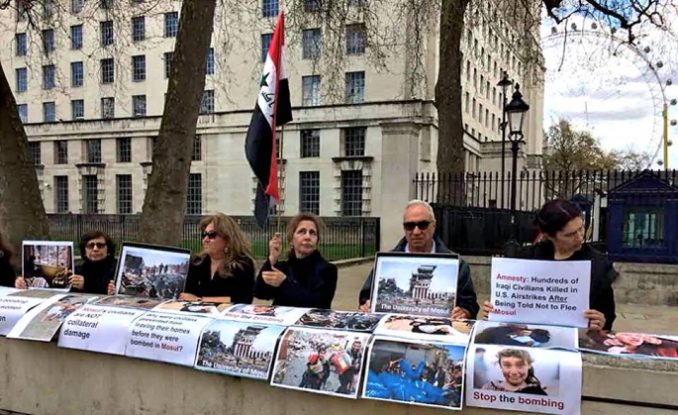 Using the standards that the corporate media applied to the Syrian/Russian retaking of Aleppo last December, the U.S. and its coalition are guilty of war crimes for their actions during the ongoing assault on Mosul in Iraq that began last October. Only this time the media reports are quieter.

The Pentagon boasts that its bombings avoid civilian casualties. On March 17, however, the New York Times admits that air strikes hit a building “in which scores if not hundreds of civilians were killed, according to Iraqi witnesses.” (April 1)

According to the same article, “Airwars, a nongovernmental organization that monitors reports of civilian casualties in international airstrikes, has asserted that at least 2,831 civilians are likely to have been killed as of March 28 by the coalition’s air attacks since August 2014.” The Pentagon put this figure at 229, not counting this just past March.

An Associated Press article on April 1 quotes Bashar Abdullah, a resident of the neighborhood known as New Mosul, who lost more than a dozen family members in the March 17 attack: “How could they have used this much artillery on civilian locations? Iraqi and American forces both assured us that it will be an easy battle, that’s why people didn’t leave their houses. They felt safe.”

These bombings that kill civilians can only increase now that the Donald Trump administration has turned over combat decisions to the military leaders in the field.

It is also likely that there will be more casualties among U.S. troops. “The Pentagon said that officially there are 5,262 U.S. troops in Iraq even as officials privately acknowledge at least a couple thousand more there.” (AP, April 1)

When the Syrian army retook Aleppo last December, the city’s inhabitants greeted the soldiers as liberators from the Islamic State group and the other sectarian militias, such as the U.S.-backed Free Syrian Army.

The population of Mosul, which IS has repressed, also has been persecuted by the Baghdad government. Ever since the U.S. purposely exacerbated sectarian rivalry between Shiite and Sunni communities in Iraq — as a tool to “divide and conquer” the Iraqi resistance to U.S. occupation — the mostly Sunni city has been targeted by sectarian militias.

In London on April 1, a group of exiled Iraqi women held a vigil opposite 10 Downing Street, the residence of the British prime minister, to protest the bombing and killing of  civilians in Mosul city, according to a report by Iraqi author Haifa Zangana.

The ongoing U.S.-led coalition’s war crimes against Mosul are an extension of the imperialist war against Iraq that began with the 1991 bombing of the country’s infrastructure, a 12-year-long blockade and sanctions policy, and the 2003 invasion that lasted until 2011 and now has been extended by the return of U.S. troops. This aggression has killed more than 2 million Iraqis and displaced many millions more.