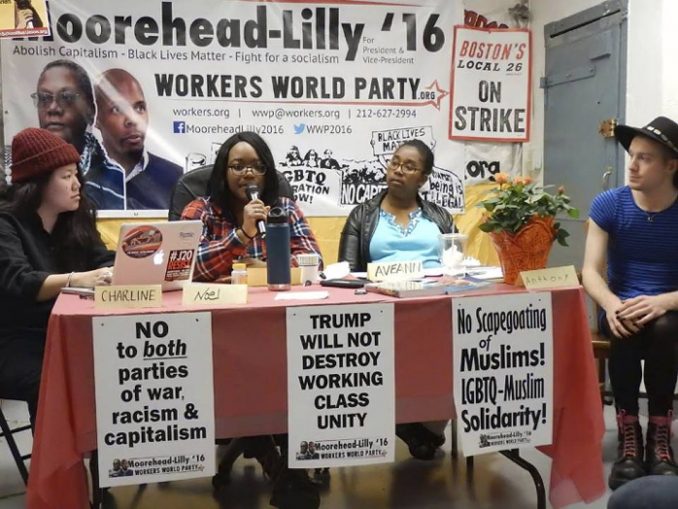 “Together We Rise! Global Women’s Fightback vs. Trumpism” was the theme of a powerful and uplifting International Working Women and Trans Women’s Celebration held by the Boston Branch of Workers World Party and the Women’s Fightback Network on March 24.

Dedicated to celebrating women’s resistance and leadership in today’s struggles, the program placed special emphasis on defending Indigenous sovereignty and leadership of the global “Water Is Life” struggle, the Black and Trans Lives Matter movements, and the millions of immigrant workers and refugees facing Gestapo-like Immigration and Customs and Enforcement terror, including raids, detention and deportation.    .

The soulful tunes of Nina Simone welcomed guests to this dynamic event co-chaired by Noel Sanders and Diva Williams, who raised the importance of unity and building a movement based on intersectionality and leadership of the most oppressed to advance the working-class struggle. Noel Sanders led a moving #SayHerName call-and-response tribute to several trans women of color who have been murdered by state-fueled violence in 2017. A moment of silence honored their cruelly taken lives.

The audience also participated in an art-based segment honoring a longer list of trans women who were murdered in 2016. Local artist and educator Charline Xu facilitated this expression of how the complexity of lives are interlinked in many ways.

Keynote speaker Mahtowin Munro, of United American Indians of New England and lead organizer for Indigenous People’s Day in Massachusetts, opened her remarks by intoning, “Black Lives Matter and Water Is Life.” She urged those gathered to see Standing Rock as “a victory which brought forth unprecedented unity.”

Munro continued, “We need to work together and learn from each other and the struggles of the past, to follow the example of Standing Rock. The hundreds of those arrested include many youth and elders and many, many women.  As the water protector camps were finally cleared entirely in late February, one of the last arrested was Regina Brave, who is 80 and was also a veteran of the Wounded Knee takeover in 1973.

“When I am talking about women, I want to explicitly say that I am including trans women. It is important to celebrate the resurgence of Two Spirit leadership that is occurring, with a strong Two Spirit presence at Standing Rock and many other places. Women and Two Spirit people have been bearing the weight of colonialism in so many ways, for so long.

“There is a war against us. The war did not just start when Trump was elected. Immigrants, Muslims, disabled people, Black and Latinx and Asian people, Indigenous, trans and Two Spirit people — we must be in solidarity with each other.“

In the spoken word segment of the program, urgent calls were made to acknowledge, accept and embrace one another. Several nonbinary and trans people shared their personal experiences through poetry and testimonial expressions, moving the crowd to cheers of support and a group hug.

There was strong encouragement to continue facing fear in the current political climate and to continue striving together to build a transformative fightback movement led by the most oppressed. Affirmed was that Indigenous, Black, Latinx, Asian and Arab people, Muslims, women, LGBTQ and disabled people joining hands with trade unionists, employed and unemployed workers, Fight for $15 workers, students and youth can smash Trumpism.

A panel of dedicated community activists, including Charlene Xu, Aveann Bridgemohan, Andie Michelle and Nathan Heathman, spoke to the importance of fighting school closings and austerity cuts to public education; the need to demand increased funding for addiction treatment and creation of safe injection facilities (SIFS) for loved ones in the opioid crisis; and the significance of teaching youth and community members to grow affordable and healthy food in “food deserts” and fight racist gentrification. Folks attending and participating ranged in age from 9 to 82. During the open mic, many spoke of their roots in Flint, Mich.,  Biloxi, Miss., the Dominican Republic, Trinidad, Puerto Rico, Mexico, Cape Verde and elsewhere.

This sharing of working-class solidarity across societally enforced boundaries is the struggle being won. One of the elders articulated how she has always responded to structural oppression: “Activism. It’s knowing what’s right in your heart and doing it.”

On that note, the crowd vowed to continue building anti-fascist resistance in their communities and to put every ounce of effort into building unity for the Global General Strike this coming May Day.