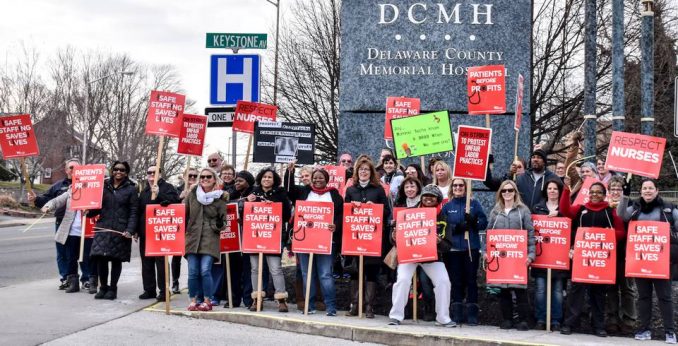 To protect their own and the public’s health, these nurses need a union contract.

Philadelphia – On March 10, after a two-day strike and a three-day lockout, 370 nurses and technicians returned to their jobs at Delaware County Memorial Hospital (DCMH) in Upper Darby, Pa. Hospital executives wasted $1.5 million on scab replacements for the week instead of coming to an agreement with the workforce of mainly women, represented by the Pennsylvania Association of Staff Nurses and Allied Professionals (PASNAP).

Bargaining began over a year ago and has been fruitless so far. Negotiations are scheduled to resume on March 14.

Struggling for their first contract, the nurses are fighting for safe staffing levels and adequate supplies and equipment for their patients as well as fair wages, health care and pension benefits for themselves and their families. The workers say they are tired of being treated with unrelenting austerity while hospital executives wallow in high salaries and millions are spent on mergers, acquisitions and related schemes.

“We used to have five patients to one nurse on the floors. Now they’re giving us up to seven and eight patients. They’ve also cut in half the number of nurses’ aides, to just one for 20 patients,” said Angela Neopolitano, a 36-year veteran ICU nurse at DCMH and president of the PASNAP nursing chapter, at a rally on the first day of the strike. “This is about patient care. We will no longer stand for the antics of Prospect. Our patients come before their profits!”

Some 1,500 nurses and allied health professionals won a 28-day strike at Temple University Hospital in 2010, despite management’s use of 850 scabs. Since then, PASNAP has become the fastest-growing union for nurses and health professionals in Pennsylvania, organizing the nurses at St. Christopher’s Hospital, Einstein Hospital, Hahnemann Hospital, Crozer-Chester Medical Center (CCMC) and DCMH, all in the Philadelphia area. (pennanurses.org)

As at Delaware County this week, nurses at CCMC walked picket lines during a strike and lockout in September 2014 as scabs were brought in for those five days. They finally agreed to a four-year contract after 14 months of negotiations. The long struggle for their first PASNAP contract was fought against the executives of Crozer-Keystone Health System, a network of five hospitals and clinics that includes CCMC, Taylor Hospital, Springfield Hospital, Community Hospital and DCMH, all in Delaware County, bordering Philadelphia.

That health system was bought by Prospect Medical Holdings Inc. in July 2016, months after contract negotiations had already commenced at DCMH. The sale changed the not-for-profit system to a for-profit entity.

Prospect owns 18 hospitals, over 3,000 licensed beds, and a network of more than 140 clinics in Southern California, Texas, Rhode Island, New Jersey and Pennsylvania.

LGP has raised over $15 billion of private equity capital and has invested in 65 companies with aggregate values of $60.5 billion. The hedge fund’s primary concern is making profits, not providing health care.

The Facebook event page of PASNAP, the nurses’ group, revealed that “Prospect Medical Holdings’ facilities across the country have come under critical scrutiny. Some of their hospitals have the worst possible patient satisfaction scores and are among the worst ranked in the nation. The company is under investigation by the IRS and the state of California and, despite operating hospitals in Delaware County [in the state of Pennsylvania], the hedge fund is registered in the state of Delaware and does not pay Pennsylvania corporation taxes.”

While DCMH may be the nurses’ most formidable foe yet, their union has never been stronger. At the rally on the first day of the strike, labor supporters included members of UNITE HERE, United Steelworkers, the Teamsters, American Federation of Teachers Local 2026, the Working Educators Caucus of the Philadelphia Federation of Teachers and Upper Darby Professional Firefighters Local 2493. While Democratic U.S. Rep. Bob Brady and Upper Darby Republican Mayor Tom Micozzie spoke offering their support, they both urged PASNAP to return to the bargaining table.

DCMH is located in Upper Darby, a suburb of 83,000 people, almost a fifth of them immigrants.

If contract negotiations aren’t settled quickly, the Trump administration’s policies on the Affordable Care Act (ACA), immigration, labor and sweeping austerity could have a damaging effect on the outcome.

The nurses’ union PASNAP has participated in rallies against cuts in the ACA and against deportations, gathering community support for the right to health care, for the rights of migrant workers and their families, and for the right of all workers to adequate working conditions, wages and benefits.

Perhaps negotiations will succeed in reaching an agreement. If not, the next battle for a union contract at DCMH may require an even larger turnout of PASNAP members, community supporters and all workers.