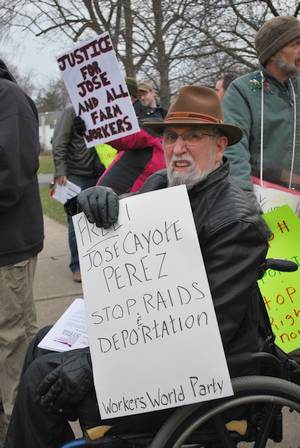 Rochester, N.Y. — On March 9, nearly 200 people braved the aftermath of a violent windstorm to demand freedom and justice for José Coyote Pérez, an immigrant farmworker in the Rochester area. The rally was supported by a number of community groups, including Workers World Party.

Two weeks ago Pérez — a dairy worker, community leader and father of four — was detained by U.S. Immigration and Customs Enforcement, despite his case being closed in September of last year.

Pérez has advocated for immigrant rights and has also been active in the Fight for $15 movement and numerous other issues. Shortly before his arrest, he courageously spoke out at City Hall demanding that the city of Rochester strengthen its status as a sanctuary city.

Pérez spoke to the demonstrators via a telephone hook-up with the ICE detention center in Batavia, N.Y. He related how immigration officials treacherously asked him to come and consult with his caseworker, and then arrested him with no warning.

His spouse Dolores, a community leader in her own right, also spoke to the gathering, which received many honks of support from passing cars. She is scheduled for a hearing at the detention center in Batavia on March 15, and she and her supporters are fearful that ICE could seize this occasion to arrest her as well. Support rallies are planned at the detention center to defend her and all the unjustly detained immigrants.

Ever since the inauguration of Donald Trump, ICE has behaved in an especially sweeping and brutal manner. This has been true in the upstate New York region, which strongly depends on migrant labor for its vast dairy farms, fruit orchards and vineyards.

The rally in Rochester concluded with a militant march from the site of the demonstration to a nearby office of the U.S. Border Patrol.