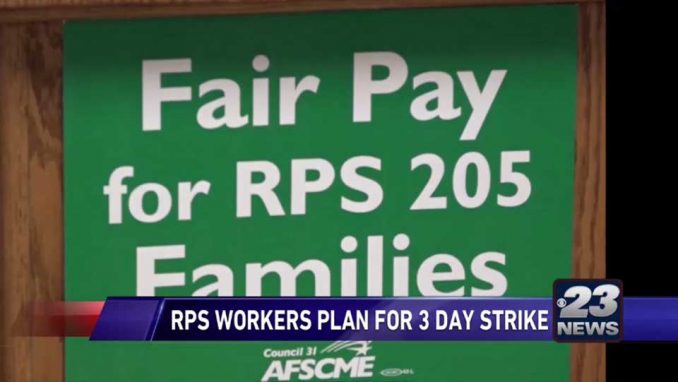 After working since July without a contract, more than 900 Rockford Public School workers from American Federation of State, County and Municipal Employees locals 692, 3210 and 1275 will be going on a three-day strike March 15-17. These locals represent the school paraprofessionals, nutritionists and bus drivers, respectively.

Workers World sat down with Pamela Hillyer, an AFSCME Local 692 paraprofessional worker, to hear from the rank and file about what led to the vote for a strike and what’s at stake for the workers.

Workers World: What has the school district done to the workers?

Pamela Hillyer: The main issue is around rising health care premiums that the school district is forcing on us, which equates to a substantial cut in our wages. The increased premiums would mean an approximately 1,145 percent rise in health care costs over the last three years, from roughly $43 to $544 every month. While the school district has said that they have gone “to great lengths to make sure employees came out ahead,” they have instead refused to negotiate with us and insist on the drastic attack on our health care. We are already grossly underpaid skilled workers.

WW: Why did the union decide to strike?

PH: The school district has refused to compromise or even have a genuine dialogue with the union about the proposed contract. After the last negotiation meeting, where the district put forth the same contract as their supposed “best and final offer,” the union knew it was time to increase pressure on the district to come to a fair compromise.

Here is the direct quote from AFSCME on the decision: “The elected AFSCME Bargaining Committee, from the paraprofessionals [to] bus drivers and nutritionists service workers, subsequently decided to conduct a three-day strike to send a strong message to the District that the members are frustrated with the extremely harsh proposal that the District imposed on employees in violation of the Illinois Educational Labor Relations Act. AFSCME has filed an unfair labor practice with the Labor Board over this violation of law.”

WW: Will you continue striking if the workers’ needs aren’t met?

PH: The union has said they will do rolling strikes until they win a fair contract. It’s the only thing that makes sense, because why would we go on strike for three days, then give up if it doesn’t work immediately? We will be stuck with this contract for the next three years and struggling to afford health care.

WW: How has the school district responded to the strike?

PH: The superintendent, Ehren Jarrett, says he respects us, while at the same time demonizing us and twisting the facts in an attempt to pit the community against the union.

WW: How is the school providing services during the strike? Are they bringing in scabs?

PH: They might have the teachers take on the paraprofessionals’ positions, but if they do, the teachers’ union will be filing grievances. For the nutritionists, Auburn High School’s administration suggested to their gifted academy program students and parents that they volunteer to give out meals for supposed college credit. They won’t be able to provide transportation to the students, so they are putting it on the parents to get their children to and from school every day.

WW: What has been the community’s response, and are there any other groups supporting you?

PH: Many parents are confused and upset. Thousands of students will be without transportation and won’t receive the amount of care they need. A lot of confusion comes from the misleading information sent out by the school district, painting us as greedy. But we’ve also gotten help from youth activists, who are planning a solidarity march on March 14. They will gather at 201 7th Street at 5:15 p.m., then march to join a rally outside of the school administration building at 501 7th Street.

WW: How will the union win?

PH: The district is going to realize that they need us. The schools can’t properly function without us — whether we’re driving the buses, serving the food or taking care of students with special needs. They can try to continue to refuse any discussion, but eventually they are going to be pressured into a compromise, because we’re necessary to ensure a safe, positive learning environment.