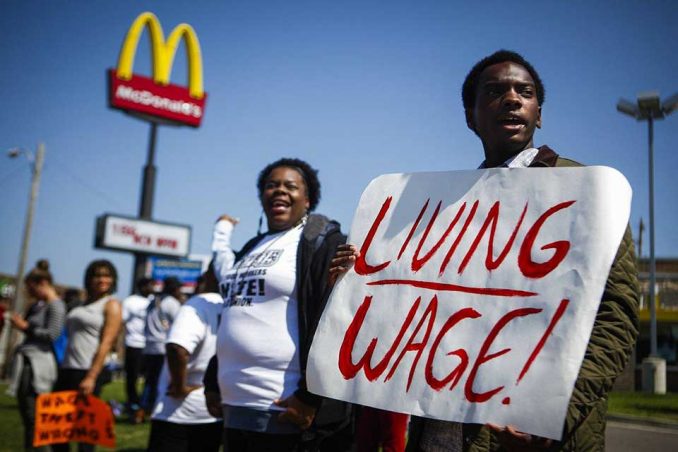 Police, when they arrest and even shoot people, usually say they are just “upholding law and order” or “protecting private property.” Sometimes they even say they are there to “serve the people.”

But in this age of Boss Trump, the Memphis Police Department has dispensed with any pretenses. In answer to a civil rights lawsuit filed by the local chapter of the Fight for $15 fast food workers, the cops stated they had “authorization from the president of McDonald’s to make arrests.” (theguardian.com, March 1)

The Fight for $15 group is part of the union-supported national campaign to win an increase in the minimum wage and union rights. Since a nationwide “Day of Protest” in 2014, Memphis cops have followed organizers home after meetings, banned them from City Hall and ordered workers not to sign petitions, sometimes going behind store counters to do so.

Most of the workers participating in the Memphis Fight for $15 campaign are Black. Cops have consistently arrested them for violating permit regulations while waiving such requirements for white demonstrations.

They have even invited McDonald’s franchise owners to join them in tailing organizers.

Despite this harassment, Memphis fast food workers are staying strong and united. Ashley Carter, a Fight for $15 national organizing committee member and a Church’s Chicken worker, told a reporter: “They’re trying to stop us from speaking out, but even though it’s riskier, we know we have a right to protest and we’re not going to be intimidated. … Our Fight for $15 is changing the country and it’s the Memphis Police Department that’s going to have to change along with it.” (theguardian.com, March 1)

Unionists know cops are not on their side. Picket lines are attacked, but scabs are protected. Union leaders are often arrested on trumped-up charges. Black and Latinx activists and progressives generally have long known that cops are the frontline in protecting big corporations’ oppression and exploitation. Now the cops are admitting it.