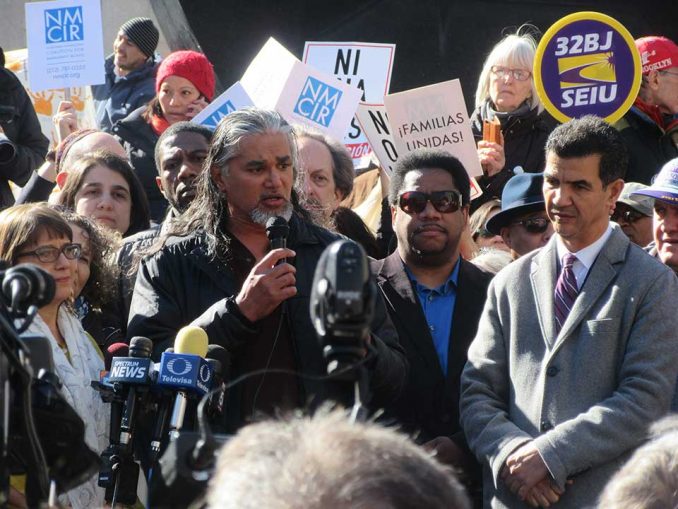 Hundreds of supporters accompanied immigrant activist Ravi Ragbir to New York ICE office on March 9, preventing him from being deported.

The 13-year-old daughter of Romulo Avelica-Gonzalez was recording a video as immigration agents picked him up, just after he had dropped her off at school in Los Angeles.

All the time she was recording, she was sobbing. (Washington Post, March 4)

The incident shook up not just Avelica-Gonzalez’s daughter and entire family, but students and teachers throughout the city.

Reports are rushing in of immigrants being picked up just like that, not just at schools, but in courthouses, at events advocating for immigrants and at workplaces.

In other words, no place is safe.

Across the U.S., immigrant communities are desperately preparing for roundups. Many, if not all, are living in total anxiety, not knowing what to do or how to do it. Teachers are consoling students, but are also asking hard questions: “Have you talked to your parents? Do you have power of attorney?” (Los Angeles Times, March 3)

This is the kind of anxiety and terror parents, children and immigrant workers are living with every moment of their lives since the inauguration of President Donald Trump.

Children are being kept from school. Doctors’ and lawyers’ appointments are being missed. Restaurants and businesses are suffering as more and more migrants stay home from school, work or shopping.

However, this chilling terror over the migrant community in the U.S. is big business for the prison-­industrial complex. While migrants live in fear, prison CEOs salivate.

Trump’s entire presidential campaign was predicated against immigrant workers in this country. Law and order, building a wall and banning Muslims are the cornerstones of his administration. All are racist and hateful and anti-worker. All this while his administration destroys access to health care.

While Trump openly singles out immigrants, racism and police terror against African-American communities are also cornerstones of his administration. The Trump/Bannon/ICE unholy alliance is a big boost to the racist occupying forces that are the police.

Two companies that have rightfully earned the hatred of the anti-mass incarceration movement, ­CoreCivic (formerly Corrections Corporation of America) and GEO Group, operate for-profit prisons and immigration detention centers in many states and for the federal government.

Between October 2015 and September 2016, more than 350,000 undocumented immigrants were detained — a number that will dramatically rise under Trump’s crackdown.

As the Times writes, “The worse the news for immigrants and their lawyers, the better it has been for the two companies. When a member of the Trump administration issues a memo or executive order, gives a speech or tweets about the crackdown on immigrants, shares of the two companies rise: Since the election, CoreCivic’s stock price has climbed 120 percent, and Geo’s has gained 80 percent.”

Under the Barack Obama administration, the massive deportations carried out were handled differently than under Trump. President Obama stated on Aug. 18, 2016, that his administration would be phasing out for-profit prisons in the federal Bureau of Prisons. The companies’ stock shares plummeted.

The Obama administration ordered Immigration and Customs Enforcement to carry out a “catch and release” policy. Undocumented workers caught were to be released if they were awaiting deportation status and were not so-called “hardened criminals.”

Trump, through the actions of white supremacist Attorney General Jeff Sessions, has changed that policy. Now no matter their status in the system, all undocumented workers will be held. These workers need a place to be held before deportation, hence the recent boom in the prison-industrial complex.

NBC News reports, “The Federal Bureau of Prisons’ … relationship with privately run lockups hinges on the housing of immigrants. Almost all of the 21,405 people currently serving time … have been designated as ‘criminal aliens’ — non-citizens who will likely be deported after they serve their sentences, according to bureau statistics.” (March 5)

For several years now, article after article and advocate after advocate have all documented the horrid conditions of these prisons. Children are held with their parents. The prisons can be ice cold and the food is often rancid. Many a heroic prisoner has gone on a hunger strike to protest these conditions.

All these conditions will intensify under the Trump administration. It is no wonder, therefore, that one sector of migrants is fleeing the U.S. in record numbers.

Homeland Security Secretary John Kelly had to admit that Trump’s policies were creating such a fearful climate that more Muslims in the U.S. were seeking refuge in Canada than ever before. Video has been released in which migrants are trekking to small wooded areas in upstate New York to cross over into Canada “illegally.”

According to various news sources, Canadian law cites that people who try to make a refugee claim are turned away in Canada if they enter the country “legally.” However, if a migrant enters “illegally” — or better said, irregularly — Canadian law allows people to claim refugee status. More than 2,000 people have done that since the Trump election, many of them with legal status in the U.S. This demonstrates the fear, even with documents.

Conditions for migrants to worsen

The Guardian wrote: “Saket Soni, executive director of … National Guestworkers Alliance, said the Trump administration’s new regulations will only exacerbate existing problems and proves that the U.S. government is ‘part of the problem.’

Every day the issue of migration across the world becomes more and more a major humanitarian crisis.

Despite the Trump/Bannon/ICE terror policies, this will not stop forced migration. Until the foreign and economic policies of U.S. imperialism are overturned, workers will be forced to leave their homelands in order to survive, in order to live.

The Los Angeles Times reported on March 9 that in 2016 “border agents saw an unprecedented spike in long-distance migrants making the journey from countries as far as Haiti, India, Bangladesh and parts of Africa. About 15,000 migrants from outside Latin America crossed through Baja California last year, nearly five times as many as in 2015.”

The working-class and revolutionary movements in the U.S. and around the world must take up the issue of forced migration in a major way. Now is the time to come to the defense of migrants.