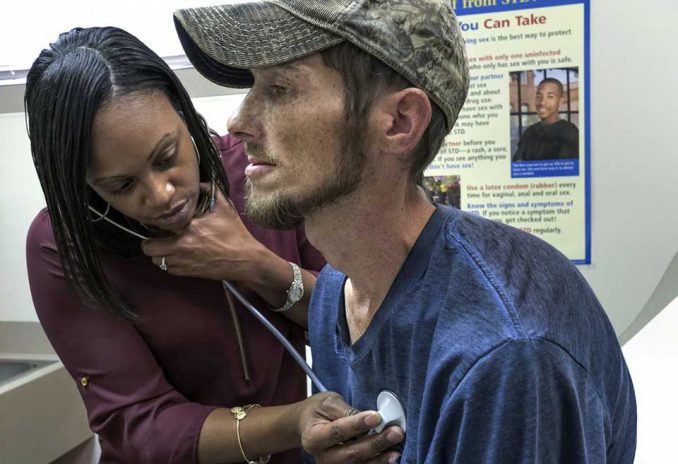 Northfork, W. Va., is in one of the poorest counties in the U.S. with the lowest life expectancy. It voted 74 percent for Trump and now stands to lose medical care under the Trump-Ryan-Price plan.

The authoritarian Trump clique in the White House — Steve Bannon, Jared Kushner, Steven Miller and Donald Trump himself — are making an end run around traditional capitalist government institutions. They are trying to shape policy and push it far to the right on all fronts without the input of the traditional capitalist establishment.

Trump and Bannon are floating the conspiracy theory that the “deep state,” meaning everything from the regulatory agencies, the mainstream media, district attorneys, courts, the spy agencies, etc., are saboteurs plotting to undermine the White House. This is to clear the way for their attacks on immigrants, on medical care for the masses and on the environment, as well as their shameless giveaways to the banks, the corporations and the richest 1%.

The Trump administration and the Republican congressional caucus are planning to hand over hundreds of billions of dollars in tax cuts to the wealthy as they craft the overturn of the Affordable Care Act passed under Obama. At the same time, Washington is playing with fire in Asia, with dangerous war maneuvers and with the installation of a destabilizing and aggressive anti-missile system in south Korea.

Under the guise of repealing and replacing the ACA, the Trump administration is backing a congressional Republican plan to cut $300 billion to $600 billion in taxes for the rich, under the deliberately misnamed American Health Care Act. These hundreds of billions of dollars given the rich will be paid for by cuts in medical coverage for the poor, the elderly and women in general, including those with mental illness and addictions. Estimates of the number of people slated to lose their coverage range from 5 million to 15 million.

The Republicans have rushed their plan through before the Congressional Budget Office can give its assessment of the impact. House Speaker Paul Ryan and Trump fear a negative assessment and therefore have already tried to discredit the CBO in advance, denouncing it for “inaccuracies” and “exaggerations.”

The Brookings Institute, a mainstream capitalist think tank, has tried to warn the public in advance. It issued a report estimating that 15 million people or more will lose their health care over the next 10 years. Brookings used previous CBO methods and estimates for its analysis.

[As we go to press, the CBO has issued its report on the bill, which far exceeds the Brookings estimates. The bipartisan CBO estimates that in fact 14 million people will lose their health care by 2018, just one year from now. And by 2026, 24 million people will have lost their health care. The CBO also estimates that Medicaid will lose $880 billion over 10 years under the Trump-Ryan-Price plan.]

… rich get hundreds of billions in tax breaks

According to the Center on Budget and Policy Priorities: “House Republicans’ bill to repeal and replace the Affordable Care Act (ACA) would eliminate ACA taxes on wealthy individuals and insurance and drug companies and greatly expand tax-sheltering opportunities for high-income people through health savings accounts (HSAs). These changes (plus several smaller provisions of the plan) would cost $594 billion over 2017 to 2026, the Joint Committee on Taxation (JCT) estimates. At the same time, the plan would seek to offset the cost of these windfall tax breaks by ending the ACA’s Medicaid expansion, radically restructuring the entire Medicaid program by converting it to a per capita cap, and dramatically scaling back the subsidies that low- and moderate-income families use to purchase affordable health care, as well as other coverage changes that would undermine the health and financial security of millions of households.”

In addition the CBPP states the 400 highest-income taxpayers would get tax cuts averaging $7 million each, adding up to $7.8 billion a year. Millionaires would get annual tax cuts of more than $50,000 on average by 2025.

Health care for women, especially the poor, is endangered by the provisions to defund Planned Parenthood. One in 5 U.S. women have visited a Planned Parenthood clinic for services like birth control, cancer screenings, tests and treatment for sexually transmitted diseases or pregnancy termination. And 78 percent of them have incomes under 150 percent of the poverty level.

Vox reported, “The more than $500 million Planned Parenthood receives annually from the federal government — the funding that Republicans in Congress now want to take away — pays for specific health services, like birth control or cervical cancer screening, for people who couldn’t afford them otherwise.

“Most of the funds (75 percent) are actually reimbursements from Medicaid, the U.S.’s public health insurance program for the poor.

“[The bill] threatens to dismantle the entire private insurance market for abortion coverage, not just public funding for abortion providers: If a woman wants a health insurance plan that will cover abortion, she (and possibly her employer) won’t be able to use tax credits to buy it under this bill.” (March 7)

ThinkProgress noted that 60 percent of Planned Parenthood’s funding comes from Medicaid and Title IX funding for preventative and primary care. “Almost 400,000 women would lose access to preventative care and up to 650,000 would have reduced preventative care within a year” without PP services, estimates the Government Accountability Office. “Research has shown that when low-income women have access to free contraception, there are significantly lower rates of unintended teen pregnancy and abortion.” (March 7)

Pentagon playing with fire in Asia

The largest ever “war games” involve 17,000 U.S. troops and 300,000 south Korean troops, as well as advanced U.S. war-fighting equipment. Washington has said the exercises are strictly defensive. But the plans are clearly aimed at “practicing regime change.”

Washington and the Pentagon justify their war games by citing the DPRK’s launch of missiles into the sea off Japan. But the missiles were launched as a response to the annual war games.The DPRK is surrounded by hostile states, including imperialist Japan, U.S. puppet south Korea, and the U.S. military itself, which has 28,000 troops in south Korea and 54,000 troops in Japan, 12 U.S. bases in Hawaii, and 5,000 troops and numerous aircraft on Guam, among other places in the region.

To add to the provocations as the U.S.-south Korea war maneuvers were getting under way, Washington announced it had begun deployment of the Terminal High Altitude Area Defense system (THAAD) at Osari air base in south Korea.

THAAD is a relatively new addition to the U.S. military’s missile defense arsenal. Produced by Lockheed Martin (and priced at more than $1 billion per system), THAAD consists of a battery of truck-launched interceptor missiles and powerful X-band radar that can detect, track and target inbound missile threats.

The decision to deploy this anti-missile system was made in 2013 and agreed to by south Korea in July 2016, but it was rushed into place for political purposes. In the meantime, there is a huge political crisis in south Korea. Months of mass demonstrations have forced the impeachment and ouster of Park Geun-hye, the reactionary president convicted on corruption charges

The masses of south Korean people are clearly opposed to the deployment of THAAD. This opposition includes Park’s likely replacement, the popular centrist-liberal Moon Jae-in. Moon favors resumption of talks with the DPRK and a return to the “sunshine policy” that aims toward reunification. So the Pentagon seized this window of time before new elections to install THAAD.

THAAD’s powerful radar is also a threat to China because when it is pointed at the DPRK it does not stop there. It can see deep into China. The PRC government has said that whether the U.S. deployed THAAD would be a litmus test about relations.

Now that it has been deployed, Chinese Foreign Minister Wang Yi has denounced it as a provocation that will upset the “strategic equilibrium” in the region. Wang, while expressing concern over the nuclear tests by the DPRK, gave the U.S. imperialists a clear message that the PRC will stand by the DPRK in any conflict [by] “insisting China and North Korea remained as close as ‘lips and teeth’ — an expression famously used by Mao Zedong.” (Guardian, March 6)

This phrase was used by Mao during the Korean War, when 3 million Chinese volunteers helped to repel the U.S. imperialist invaders. So the message is ­unambiguous.

The sudden deployment of the THAAD missile system in the midst of a militarily charged situation near China and the DPRK must be seen together with other less dramatic but significant ­developments.

There was the quiet deployment of 400-plus Marines to Syria to strengthen forces trying to capture the Islamic State group’s capital, Raqqa. These conventional forces are added to the hundreds of Special Forces already there. The Marines are equipped with Apache helicopters and M777 howitzers capable of firing 155mm shells, among other weapons. Their deployment represents a clear escalation of the U.S. war in Syria.

The Pentagon has escalated the war in Yemen as well. Previously the war was carried out by Saudi Arabia, with logistical and material support from the Pentagon. Recently U.S. commanders in the field have been granted new authority to conduct raids on villages and drone strikes, without prior approval from the White House.

The U.S. commander in Afghanistan, Gen. John W. Nicholson Jr., recently testified to Congress that he could use “a few thousand more troops” to break the “stalemate” in the country. (New York Times, Feb. 9)

These developments represent a major step forward in the political authority of the military high command under the Trump administration.

By contrast, Rex Tillerson, the head of the Department of State, has been kept out of meetings with heads of state by Trump, Bannon and Kushner (Trump’s son-in-law). Tillerson has had no joint appearances with Trump. His requests for assistants have been turned down. No press will be allowed on his plane on an upcoming trip to Japan, south Korea and China. And the State Department budget is to be cut by 37 percent, while the Pentagon is to get a $54 billion increase.

Just days ago Mexico’s Foreign Minister Luis Videgaray was in Washington. “The Los Angeles Times’s Tracy Wilkinson asked State spokesperson Mark Toner what the plans were for his visit. Toner, a highly regarded career foreign service officer, apparently had no idea that a key foreign dignitary was even in the city.” (Vox, March 10) The foreign minister met with Kushner.

To be sure, while the State Department wields the so-called “soft power” of U.S. imperialism, it is a vicious enemy of the world’s people. It engineers regime change, engages in every manner of subversion against progressive governments, and uses nongovernmental organizations to promote “color revolutions.”

Nevertheless, the shift toward open military power in government under Trump is a menacing move that will expand imperialist war and intervention.