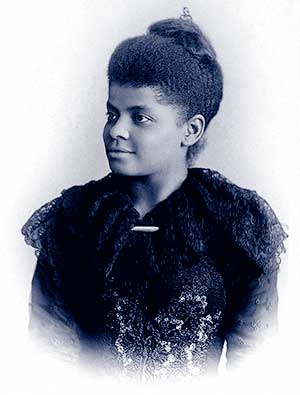 The many references by African-American women intellectuals and activists to educational achievement, economic self-reliance, sobriety and religious adherence suggest that Western bourgeois values influenced their thinking and organizational approaches. However, the social conditions created by Reconstruction’s failure must be considered.

The profit-driven system of institutional racism and national oppression required super-exploitation of African people. They were systematically denied access to education, adequate wages, quality housing and job opportunities. The criminalization of their communities by law enforcement represented key aspects of the repressive mechanism which served capitalism.

Knowing that the federal government and corporations would likely not provide assistance to alleviate workers’ and farmers’ social conditions, African Americans were compelled to create their own institutions to foster social reproduction and ensure survival. Consequently, during this period, there was strong emphasis on self-improvement through education, personal discipline and the adoption of perceived societal norms.

Ida B. Wells was born in Holly Springs, Miss., in 1862 as an enslaved African child. Her parents instilled in her a sense of pride and yearning for education. They died in the late 1870s during a yellow fever epidemic. Wells then moved to Memphis to live with relatives and became a teacher in the Shelby County school system.

After being physically ejected from a segregated train in Woodstock, Tenn., because she refused to move out of her seat, Wells filed a lawsuit in 1884 against the Chesapeake, Ohio Railroad Co. for discrimination. She won a judgment in the lower courts, but the company appealed to the Tennessee Supreme Court, which overturned her winning settlement.

Wells became well-known as a teacher and newspaper editor. She was eventually fired by school system officials after she criticized the inferior education provided to African-American students.

Wells protested the racist lynching of three African-American men, her friends, Thomas Moss, Will Stewart and Calvin McDowell, in Memphis on March 9, 1892. They were only guilty of defending themselves against a lawless, white racist mob which attacked them in their grocery store. She wrote a series of editorials in her newspaper, Free Speech and Headlight, denouncing racist lynchings. Subsequently, there was a boycott of street car services and white-owned businesses, followed by a mass exodus of Black people from Memphis to Oklahoma.

Writings by Wells exposed the fallacy of the racist myths that Black men were a threat to white women. When one of her newspaper’s editorials noted that some white women sought social relations with African-American men, racists threatened Wells, destroyed her Memphis ­office and drove her out of the city.

After moving to Chicago, Wells opposed the terms under which the 1893 World’s Columbian Exposition, also known as the Chicago World’s Fair, was being held to celebrate the 400 years since colonizer Christopher Columbus arrived on this continent. African-American organizations, churches and newspapers called for a boycott of the fair. The community demanded positions on the whites-only board of directors and planning committees that designed the project and space for exhibits. Ruling-class forces rejected these legitimate requests. Eventually, some concessions were made, although many African Americans remained dissatisfied and refused to attend.

Prior to the exposition’s opening, Wells initiated, contributed to, edited and published a pamphlet attacking the event; it contained sections written by Frederick Douglass, Ferdinand L. Barnett and I. Garland Penn. It was entitled “The Reason Why the ‘Colored’ American Is Not in the World’s Columbian Exposition — the Afro-American’s Contribution to Columbian Literature.”

Wells noted, “The ‘colored’ people of this great Republic number eight millions — more than one-tenth the whole population of the United States. They [landed] … at Jamestown, Virginia, in 1619 in a slave ship, before the Puritans, who landed at Plymouth in 1620. They have contributed a large share to American prosperity and civilization. The labor of one-half of this country has always been, and is still being, done through them. The first credit this country had in its trade with foreign nations was created by productions resulting from their labor. The wealth created by their industry has made it possible for them to make the most of their progress in education, art, science, ­industry and invention.”

Wells added, “Those visiting the World’s Columbian Exposition who know these facts … will ask: Why are not the ‘colored’ people, who constitute so large an element of the American population, and who have contributed so much to American greatness, more visibly present and better ­represented in this World’s Exposition?”

The pamphlet documented proof of the exclusion, exploitation and repression of African-American people. Wells did not speak at the World’s Fair; however, her voice was heard loudly and clearly through the document.

Highlighting the dangerous situation facing African-American people, Wells recounted extrajudicial mob killings. Chapter 4 entitled “Lynch Law” reported, “A lynching equally as cold-blooded took place in Memphis, Tennessee, March, 1892. Three young ‘colored’ men in an altercation at their place of business fired on white men in self-defense. They were imprisoned for three days, then taken out by the mob and horribly shot to death. Thomas Moss, Will Stewart and Calvin McDowell were energetic businessmen. … Their [grocery] business had prospered and that of a rival white grocer named Barrett had declined.”

Wells recounted, “Barrett led the attack on their grocery which resulted in the wounding of three white men. For this cause were three innocent men barbarously lynched, and their families left without protectors. … They were the officers of the company which conducted the grocery. … [A]ll three were men of splendid reputation for honesty, integrity and sobriety. But their murderers, though well-known, have never been counted, were not even troubled with a preliminary examination.”

Although he submitted an article to “The Reason Why,” Douglass attended the exposition and delivered an address. Concerning the Exposition’s aspects which focused on African people’s affairs, some administrative control was relinquished. Douglass, the formerly enslaved, self-emancipated African turned abolitionist and propagandist, was named administrator for “Colored” American Day.

Christopher Robert Reed, of Roosevelt University, wrote in 1999, “Ida B. Wells stayed away from the celebration but retroactively reversed her assessment … and [sought] out Douglass at the Haitian Pavilion.” There, they handed out copies of “The Reason Why.”

Wells traveled around the U.S. and abroad as a leader of the anti-lynching crusade. She continued to write, speak out and organize against racism and injustice for the rest of her life. Also a fighter for women’s rights, Wells established an African-American women’s suffrage organization.

Ida B. Wells Barnett married Ferdinand Barnett in 1895, and they had four children. This internationally renowned “crusader for justice” died in 1931.