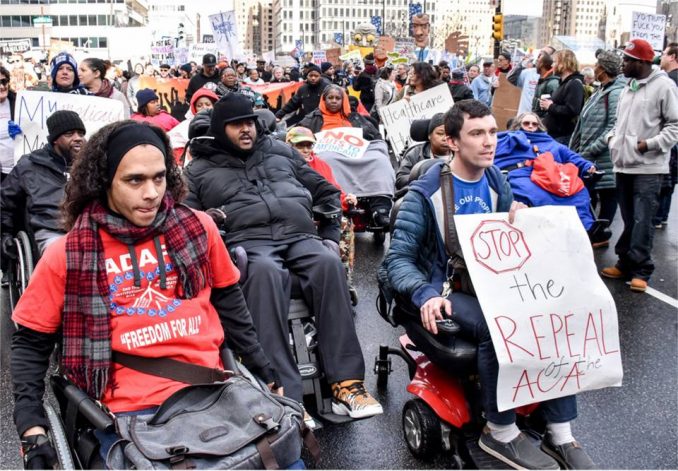 Thousands of protesters confronted President Donald Trump in Philadelphia during his first appearance since the inauguration outside Washington, D.C. Trump was scheduled to speak at a retreat for Republican congresspeople Jan. 25-27 at the Loews Hotel. Protesters began gathering even as busloads of GOP members disembarked to go into the hotel and didn’t let up until they left.

On the evening of Jan. 25, in the first protest against Trump called by LGBTQ organizers since Jan. 20, more than 1,000 people took part in a “Queer Rager” dance party outside the Loews Hotel. Waving rainbow flags and wearing glo beads, the energetic throng of dancers and demonstrators voiced concerns about the Affordable Care Act, immigration, LGBTQ issues, police brutality, climate change and more. One creative sign read, “I’ve seen better cabinets at IKEA.”

The next day an estimated 5,000 demonstrators filled Thomas Paine Plaza across from City Hall and confronted Trump as his motorcade made its way down Broad Street to the hotel. The rally was initiated by a wide range of organizers, including immigrant rights activists, Affordable Care Act advocates, labor unions, Standing Rock solidarity supporters, Black Lives Matter organizers, Muslim groups and more. Speakers included representatives of the Black and Brown Workers Collective, Temple University Hospital nurses and immigrants.

‘Health care for all, no border wall!’

The rally and march were very multinational, as were the crowds of people standing along the route cheering on the marchers with raised fists and widespread applause. Many joined the march. A number of construction workers standing on overhead scaffolding were seen with fists raised in support.

Chants included, “Health care for all, no border wall,” “No Nazis, no GOP, you’re not welcome in Philly” and “Black Lives Matter!”

Police and Homeland Security had erected a strong metal barrier around the Loews Hotel to prevent protesters from getting inside, but demonstrators occupied the streets, effectively shutting down Center City for hours. Outside City Hall, #NoDAPL activists covered the pavement with banners reading “Philly with Standing Rock,” “Stop the pipeline” and “Respect Native sovereignty.”

Some demonstrators also carried signs denouncing pro-Brexit British Prime Minister Theresa May, who joined Trump in addressing the GOP retreat. The event ended with a march to U.S. Senator Pat Toomey’s Philadelphia office to confront him for supporting Trump’s agenda, including the dismantling of health care.

Later in the day on Jan. 26, thousands of activists gathered to protest again, this time starting with a rally at Rittenhouse Square. The historic area is surrounded by many high-rise condominiums occupied by some of the city’s wealthiest residents.

The rally was initiated by a coalition of groups, including Black Lives Matter PA, Philadelphia Socialists, Jewish Voice for Peace and others. It was followed by a march that snaked its way through Center City for several hours, getting close to the Loews Hotel at one point after demonstrators went around sanitation trucks parked in the road to block access. A contingent of activists with disabilities joined the march. Several immigrant rights activists in the march then set up a smaller rally just a block from the hotel.

Mayor challenged on lack of ‘sanctuary’

It noted that while Philadelphia abides by Fourth amendment requirements that Immigration and Customs Enforcement produce a warrant if they want to hold someone, ICE can and does conduct raids and deportations. Juntos noted that while city officials took initial steps, much more is needed “to declare Philadelphia a sanctuary, not just for immigrants but for Black and Brown folks, poor people, workers, etc. This would have to include an end to low-level policing policies like ‘Stop and Frisk’ and an end to racial profiling” and more.

From the turnout and street response to the protests, it was clear that Trump’s across-the-board attack on workers and oppressed people provides a unique opportunity for people to connect many different struggles. The next step is increased consciousness, from spontaneously resisting issues that personally affect them to class consciousness and an anti-capitalist agenda.