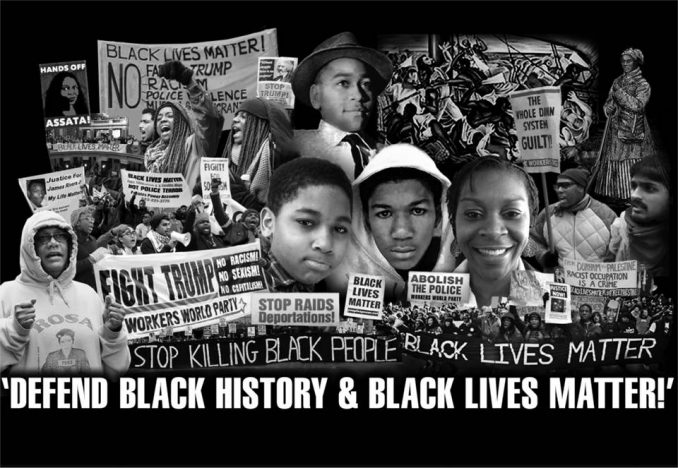 Jan. 30 — Dr. Martin Luther King Jr. sought to articulate a deeper program for the movement against national oppression and economic injustice from 1967 until his death in 1968.

Just three weeks prior to his assassination, on March 14, 1968, Dr. King, the co-founder and president of the Southern Christian Leadership Conference, honored an invitation from the Grosse Pointe Human Relations Council to speak on “The Other America.” He was to examine the debate over “open housing” for African Americans amid an unprecedented wave of urban rebellions across the United States.

Seven months prior to Dr. King’s visit to Grosse Pointe High School, in an affluent suburb on Detroit’s border, the city exploded in a five-day rebellion starting July 23, 1967, led by the African-American community.  It resulted in 43 deaths, hundreds of injuries, 7,200 arrests, and estimated property damage of tens and perhaps even hundreds of millions of dollars. The social unrest was sparked by many issues: the abysmal conditions fostered by police brutality, labor discrimination, overcrowded housing districts contained through de facto segregation, and inadequate schools with bulging classroom sizes and declining infrastructure.

Dr. King had been developing his views on “the other America” for at least a year when he addressed that subject in a major speech at Stanford University in California on April 14, 1967. After the enormous gains of the Civil Rights Movement between 1955 and 1965, the focus of SCLC and the Student Nonviolent Coordinating Committee shifted substantially to the municipalities in the northern and western states, where huge swaths of depressed neighborhoods housed millions of African Americans, Puerto Ricans, Mexicans, Native Americans and poor whites.

White backlash and opposition to the Vietnam War

SCLC moved into Chicago in 1966 in an effort to test its evolving program centered around jobs, housing and income.  A year later, the organization came out solidly in opposition to the U.S. bombing and occupation of Vietnam. Dr. King saw the war as an enemy of African-American people, as well as poor people in general.

In Chicago, white working-class and middle-class people resisted the Freedom Movement’s demands. They were supported and encouraged by Mayor Richard Daley’s administration.  Daley rejected the call for drastic action to eliminate slums, housing discrimination and poverty in the country’s second-largest city.

The eruption of a four-day rebellion on July 12 was blamed on SCLC’s work, even though the organization maintained its ideological commitment to nonviolent methods of struggle. Although the Chicago Freedom Movement won only limited results for the city’s people, it portended much for developments over the next three years.

Dr. King was met at Grosse Pointe High School by 2,700 people, who crowded the gymnasium where he was to speak. Yet there was also a hostile response to his presence in the suburb.  Members of the ultraconservative racist organization Breakthrough and the Grosse Pointe Property Owners Association argued that Dr. King’s presence could prompt violence and should be banned. The Grosse Pointe School Board’s vote in favor of allowing the meeting by a 5-2 margin was accompanied by a requirement for a $1 million insurance policy in case people were injured or killed. (Grosse Pointe News, Jan. 5, 2017)

Breakthrough was headed by Donald Lobsinger, a city of Detroit Recreation Department employee.  He led a picket line outside the school. Some 200 Breakthrough members and supporters chanted to protest Dr. King’s appearance, denouncing him as a “traitor” and a “communist” for his stance in opposition to the Vietnam War, among other issues.

Members of the neofascist group infiltrated the audience at Grosse Pointe High School and repeatedly interrupted Dr. King’s speech. He said that they would never discourage him from doing the important work of linking the Civil Rights and anti-war movements together. He clearly identified the African-American struggle as having a class character due to the economic exploitation of the people.

One of the most important sections of Dr. King’s address came when he observed: “Now let me get back to the point that I was trying to bring out about the economic problem. And that is one of the most critical problems that we face in America today.  We find, in the other America, unemployment constantly rising to astronomical proportions and Black people generally find themselves living in a literal depression. All too often when there is mass unemployment in the Black community, it’s referred to as a social problem and when there is mass unemployment in the white community, it’s referred to as a depression. But there is no basic difference.”

King went on: “The fact is that the Negro (a word used then to describe people of African descent in the U.S.) faces a literal depression all over the U.S.  The unemployment rate … [reports] the labor department is about 8.8 percent in the Black community. But these statistics only take under consideration individuals who were once in the labor market, or individuals who go to employment offices to seek employment.

“But they do not take under consideration the thousands of people who have given up, who have lost motivation, the thousands of people who have had so many doors closed in their faces that they feel defeated and they no longer go out and look for jobs, the thousands who’ve come to feel that life is a long and desolate corridor with no exit signs,” stressed Dr. King. “These people are considered the discouraged and when you add the discouraged to the individuals who can’t be calculated through statistics in the unemployment category, the unemployment rate in the Negro community probably goes to 16 or 17 percent.  And among Black youth, it is in some communities as high as 40 and 45 percent.”

Additionally, Dr. King stated: “The problem of unemployment is not the only problem. There is the problem of underemployment, and there are thousands and thousands, I would say millions of people in the Negro community who are poverty stricken — not because they are not working but because they receive wages so low that they cannot begin to function in the mainstream of the economic life of our nation. Most of the poverty stricken people of America … are working every day and they end up getting part-time wages for full-time work.

“So the vast majority of Negroes in America find themselves perishing on a lonely island of poverty in the midst of a vast ocean of material prosperity. This has caused a great deal of bitterness. It has caused a great deal of agony. It has caused ache and anguish. It has caused great despair, and we have seen the angered expressions of this despair and this bitterness in the violent rebellions that have taken place in cities all over our country. Now I think my views on nonviolence are pretty generally known. I still believe that nonviolence is the most potent weapon available to the Negro in his struggle for justice and freedom in the U.S,” concluded Dr. King. (Read “The Other America” at tinyurl.com/yc7ypma.)

Towards a united front opposing racism and fascism

During the Labor Day weekend in 1967, Dr. King was a featured speaker at the National Conference for New Politics held in Chicago. Thousands attended the event, which sought to draft Dr. Benjamin Spock, renowned pediatrician and writer, anti-nuclear weapons activist and Vietnam war opponent, as a 1968 presidential candidate with Dr. King as his running mate.

The NCNP’s concept was to build a broad-based alliance purportedly independent of the Democratic Party, which would take a position against the Vietnam War. Nonetheless, there were other issues that hampered the smooth operation of such a united front strategy.

Paralleling the NCNP was the Black Congress, also held in Chicago, which demanded that African-American liberation not only be placed on the NCNP agenda, but also that nationally oppressed delegates to the conference be granted veto power over all resolutions and platforms. Elements of the Black Congress program were manifested in the NCNP Black Caucus’ demands. These issues included taking a principled stand against Zionism; support for armed struggle in the liberation of Southern Africa; and recognition of African-Americans as the vanguard of the people’s movement in the U.S.

There were grave concerns that the appeals to adopt this agenda supporting African-American liberation, Palestinian self-determination, and opposing Israeli aggression against Egypt, Jordan and Syria and Washington’s support for Israel, were conveniently left off the NCNP agenda.

James Forman, then SNCC international affairs director, addressed the NCNP Black Caucus on Sept. 2, 1967, raising the demands for veto power and solidarity with the struggles of the oppressed.  He emphasized: “I hardly need to talk about the exploited labor of all of us who are Black and who tilled the fields without pay while the white man reinvested the capital from our labor. Therefore, even today, here in the United States we are the lowest class on the economic ladder.”

Forman noted: “There can be no new concept of politics, no new coalitions unless those of us who are the most disposed assume leadership and give direction to that new form of politics. If this does not happen, we are going to see the same old liberal-labor treachery of very rich white folks and Democratic Party oriented whites and Negroes trying to determine what they can do for us.” (See tinyurl.com/htxxadz)

These words are quite useful in today’s developing struggle in the aftermath of President Donald Trump’s assumption of power. Millions have taken to the streets supporting women’s and immigrant rights, self-determination for Indigenous people at Standing Rock, and opposing police brutality and suppression of the African-American vote.

However, unless the alliances that are forming are based on principled political positions, these efforts will inevitably lead right back into the Democratic Party with its betrayal of the working class, poor and nationally oppressed peoples. A revolutionary leadership must emerge to provide a programmatic thrust aimed at exposing and defeating the exploitative and dictatorial capitalist, imperialist system.

Azikiwe covered the 49th anniversary commemoration of Dr. King’s speech at Grosse Pointe South High School on Jan. 14. An audio file of the address was played to the audience before a discussion on the historic event. The newly formed Grosse Pointe NAACP chapter sponsored the program.