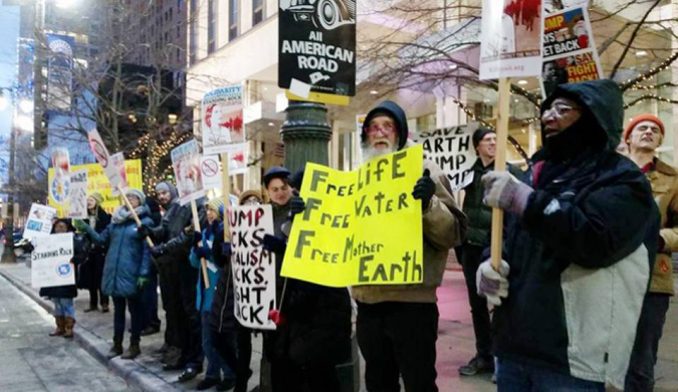 The struggle has been nonstop since the Jan. 20 inauguration of billionaire arch-bigot Donald Trump as the 45th president of United States. Many of these protests, occurring in cities and towns large and small, are often only told about and shown on social media by the participants themselves. These reports, photos and videos are reposted and shared with untold numbers around the U.S. and globally.

Here are eyewitness reports by Workers World Party members on a few of these many demonstrations. (A separate article covers the airport demonstrations.)

Fast food workers organized by Fight for $15 rallied outside the Chicago offices of the federal Department of Labor on Jan. 26. They were there to oppose Trump’s nomination of billionaire restaurant executive Andrew Puzder as DOL secretary. Workers explained that Puzder has led the industry fight to deny them a livable wage. As one McDonald’s worker put it, “Let us run the Labor Department and wages and working conditions will improve in a hurry!”

In downtown Detroit, dozens of activists of differing ages and nationalities gathered in front of Chase Bank headquarters on Friday, Jan. 27, to protest the Trump administration’s decision to allow construction to continue on the Dakota Access and Keystone pipelines. Both oil pipelines were stopped by the protracted struggle of Indigenous peoples, environmentalists and others. Camps of Indigenous water protectors are still in place in Standing Rock, N.D., where they are determined to stop the DAPL from being built under the Missouri River. Protesters expressed their solidarity with the #noDAPL struggle.

Rush-hour motorists honked their horns in agreement as protesters chanted “No blood for oil! U.S. off Native soil!” and other slogans. Chase is one of the financiers involved in the pipelines and its Detroit office has been the site of many Detroit demonstrations over the years because of its complicity in the home foreclosure crisis and its interest rate swindles against the Detroit Water and Sewerage Department. The demonstration was called by Workers World Party and covered on Fox2 News.

A “Water Is Life” walk gathered in downtown Buffalo, N.Y., on Sunday afternoon, Jan. 29, and marched to the waterfront for a rally opposing the construction of oil pipelines, which intrude on Indigenous tribal lands, ignore the sovereignty of Native nations, and put all lands and waters at risk for serious contamination and pollution.

The very large crowd was fired up with outrage at Trump’s green light to the KXL and DAPL pipelines. The march was a declaration of solidarity with Indigenous peoples and nations, and a vow of resistance. The protest was co-hosted by Buffalo Solidarity with Standing Rock, Buffalo Supports Standing Rock Water Protectors, Burning Books, Indigenous Women’s Initiatives, the Sierra Club and the WNY Peace Center.

Ellie Dorritie and Jeff Sorel contributed to this article.