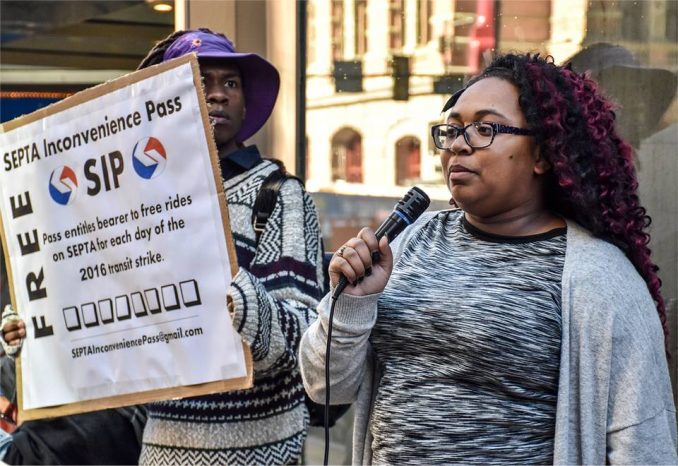 Handing out hundreds of “SEPTA Inconvenience Passes” (SIP) to passersby at a Nov. 7 press conference outside SEPTA headquarters, community activists called on the company to compensate riders for lost access to transportation during the six-day transit strike. SEPTA is the public transportation agency for 3.9 million people in and around Philadelphia

The Transit Riders Initiative demanded SEPTA honor the SIP passes with free rides for the strike days and refunds on monthly transit cards. In front of a giant SIP pass, spokesperson Erica Mines told the media, “If formal steps are not made to negotiate with riders and provide free rides, these passes will be used in lieu of fares once service is restored.”

The newly formed group wants SEPTA management held accountable for neglecting to address worker needs in a timely manner, failing to negotiate in good faith with workers and forcing the strike.

“The responsibility of accepting this cost falls on the administration, not the workers,” Mines stated. “SEPTA management intentionally stalled negotiations to intentionally use public inconvenience from the strike to force workers into sacrificing vital demands.”

A Transit Riders Initiative press release noted: “The transit workers’ demands are basic rights that all workers should be entitled to. Sacrificing these demands lowers the minimum expectations for employers across the board, from city workers to nonunion workers.”

At the press conference, community activist Deandra Jefferson called out SEPTA for putting “capitalist greed” ahead of workers’ need and communities relying on public transit. Around 800,000 riders, including 52,000 students, use SEPTA’s buses, trains and trolleys every weekday. Jefferson pointed out that if these riders had refused to go to work or school in support of the TWU strike, SEPTA would have settled on day one.

On Nov. 4, SEPTA officials sought an injunction to force workers back to work. Management’s smokescreen for gouging workers was to pit them against riders by claiming concern about the “health, safety and welfare of the public” who ride SEPTA.

It’s unlikely those riders include many of the fifteen SEPTA board members. Only four are from Philadelphia, including Pennsylvania state Rep. Dwight Evans, whose benefits include a state vehicle. The makeup of the board is controlled by the state legislature.

Spokesperson Erica Mines stated: “Like all workers, SEPTA drivers and support staff have a right to decent wages, benefits and safety. The people also have a right to safe, efficient and affordable public transit. We ask SEPTA to authorize use of the free Inconvenience Passes and for drivers to accept the passes out of respect for community sacrifices during the strike.”

The press conference was covered by three television stations and newspaper reporters, including the Philadelphia Daily News and Inquirer. As the event wound down, SEPTA management again demonstrated “concern” for riders by sending out uniformed transit police to harass the protesters.