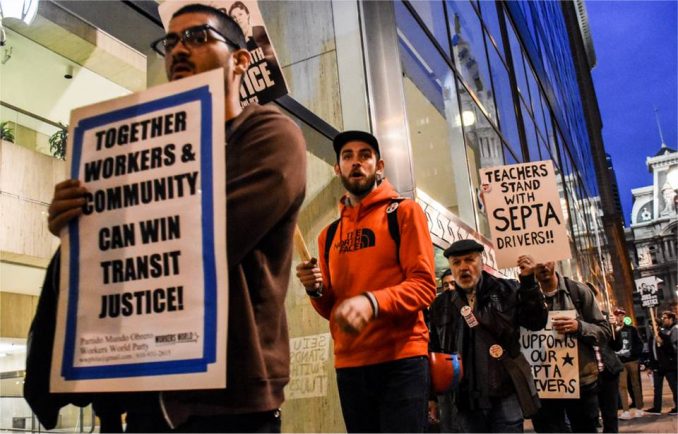 “Tentative agreement reached. We are off strike.”

The deal came as the ruling class was ganging up on the union, with Philadelphia Mayor Jim Kenny and Pennsylvania Gov. Tom Wolf both joining SEPTA’s legal hearing before Common Pleas Judge Linda Carpenter to seek a court injunction forcing the union back to work. A second hearing was to be held on Nov. 7. TWU leaders had promised to resist any injunction.

A major Philadelphia rally scheduled for Democratic Party presidential candidate Hillary Clinton the evening of Nov. 7 may have pressured SEPTA to reach an agreement. Mass transit was needed to guarantee that a big crowd could get to the Center City venue featuring President Barack and Michelle Obama, both Clintons and several big name entertainers.

Pressure on SEPTA from the community was increasing as well. Mass transit users had called for a Nov. 7 protest in front of SEPTA headquarters to demand a day of free transit for each day SEPTA management failed to agree to a new contract.

Terms of the agreement have not yet been released. While the new contract still must be approved by union members and by SEPTA’s board of directors, workers have reported back to their normal shifts and mass transit has resumed.