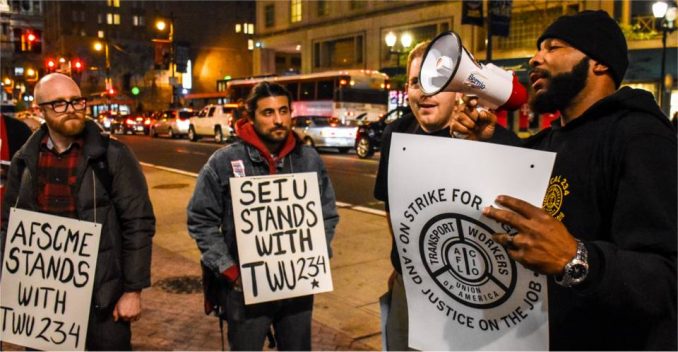 Union and community solidarity with striking transportation workers in Philadelphia.

In the first minute of the first day of November, 4,738 union drivers, maintenance workers and cashiers of Transportation Workers Union Local 234 went on strike, affecting public transportation for over 800,000 daily riders in Philadelphia.

The next morning, it seemed that thousands of unseasoned drivers and cyclists had invaded the city. Cars went the wrong way down the block, bikers wobbled out of their lanes — you almost thought you were in a city of tourists. But no, these were doubtless workers who had, up to the day before, ridden the subway trains, trolleys and buses of SEPTA, the Southeastern Pennsylvania Transportation Authority.

Management and the SEPTA Board of Directors forced this strike by refusing to negotiate a new agreement with the union. In TWU President Willie Brown’s own words, “SEPTA’s bargaining team and high-priced outside lawyers stonewalled contract talks for months prior to the strike.” (philly.com)

Local 234 has a courageous history of militant labor action, calling its members to the picket line 12 times since 1975, more than any other U.S. transit agency. During a 1998 Local 234 strike, the local AFL-CIO Labor Council threatened a general strike if SEPTA hired scabs, forcing the transit system to back down and eventually settle after 40 days. (Philadelphia Inquirer)

And what did TWU workers want with this strike? A new contract that would meet their justified demands, such as better bathroom breaks, safer scheduling, equitable pensions and quality health care.

In a Billy Penn magazine article on the strike, TWU spokesman Jamie Horwitz said, “We just think [meager breaks] are bad working conditions.” Drivers added that it’s against regulation for a driver to leave their seat to use the bathroom, and it’d be a headache to pull over in downtown traffic and a hassle to cold-ask businesses to use their bathroom. So they wait, but when they get out of Center City, “people will hop on the bus before you can even [get off].” (billypenn.com)

A second issue was better scheduling. Drivers commented that they “drive tired,” and a better scheduling system would allow for more rest. That means drivers would be less prone to fatigue — or to accidents. Pennsylvania Department of Transportation data, tracking all commercial buses in Philadelphia, show more than 950 accidents from 2011 to 2015, killing 19 people. Also needed were protocols to deal with other health hazards, such as blood or syringes, on the bus. (Newsworks.org)

SEPTA pensions were set up in the bosses’ favor with executive and manager pensions uncapped, and worker pensions capped at $50,000.  Striking workers at the Wheatsheaf picket line told supporters that managers are retiring, but SEPTA doesn’t replace many. Instead, SEPTA rehires managers as consultants to do the same jobs at more than $100 an hour, with pensions three times that of workers. This is like dumping a wheelbarrow of retirement money at the bosses’ feet with each check.

Workers were also fighting to hold onto quality health care. SEPTA was demanding health care hikes that would boost worker contributions from $552 a year up to $6,000 if they wanted to keep equivalent medical coverage.

SEPTA needs to not only repay the community for the inconveniences caused by the strike, but it owes reparations for a history of inferior service in Black and Brown neighborhoods.

Even when trains and bus lines are running, the routes are more often longer distances from homes in Black and Brown communities. These are communities more likely to be in poverty, where private cars are not affordable, and where over 25 percent of residents live below the poverty line. A strike exacerbates Philly’s transit woes for those making poverty wages. And in a city where gentrification is so aggressive, public transportation literally passes them by. (Census.gov)

SEPTA’s “premium” line is the Regional Rail, which serves the wealthier and whiter suburbs. Regional Rail was still running during the strike because that union has a separate contract. Most news stories about the strike spotlight how crowded the Regional Rail trains are, but barely cover how people in poorer communities fare during a work stoppage.

Last year, SEPTA increased service to 24 hours a day on its two subway routes, the Broad Street Line and the Market-Frankford Elevated Line. But SEPTA didn’t expand its hours to serve workers laboring until midnight and beyond in health care, fast food and other industries, but rather because more millennials are moving into gentrified neighborhoods.

Transportation justice would mean robust SEPTA service in all our communities — cars and stations as clean and as outfitted with tech and screens and quiet cars as Regional Rail. Workers would have fair wages, benefits and safe working conditions. Mass transit would be able to accommodate all people with disabilities. Riders would have the right to take public transportation for free.

Let’s take the first step toward this by recognizing that SEPTA drivers and riders should be united on the same side against a racist, anti-worker transit agency.

A gleaming mass transit would be for the whole mass of people. Until then each union victory benefits all people who have to work to survive whether employed, unemployed, union or not-yet-organized.

What do we want? Transit justice for the community — and no one left waiting at the station.