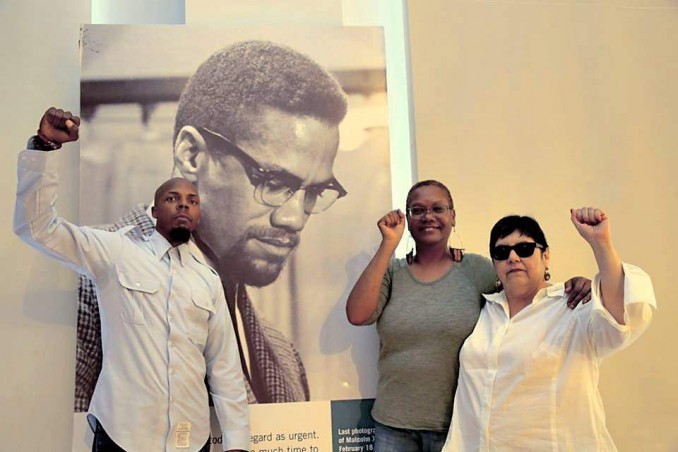 The two national conventions of the big business parties are over, and the final stage of the 2016 presidential elections has begun. In less than 100 days, either Hillary Rodham Clinton or Donald Trump will have been chosen the next president of the United States.

Whoever wins, it will be a landmark. It could be the first woman president — or the first reality show demagogue. The election will assuredly go down in history as one marked by a deep economic crisis, accompanied by the rise of white supremacy and police terror.

It also marks a rise of disenchantment with the parties of the ruling class. Whatever the outcome of the election, it bodes well for revolutionary struggles ahead.

DNC: ‘Do Not Challenge, Do Note Cynicism’

The Democratic National Convention held in Philadelphia July 25-28 was fraught with spectacle. That can also be described as skillful, cynical manipulation.

Both in the open and behind the scenes, struggles broke out around the massive and progressive support for candidate Bernie Sanders versus the long-time establishment and Wall Street support for Hillary Clinton.

When Bernie Sanders, both in his state caucus and on the floor of the convention, announced his endorsement of Clinton, boos of disagreement followed. More than once, cameras panned the convention floor to show young people with tears streaming down their faces as they realized that Sanders’ political revolution had come full circle back into the folds of the Democratic Party.

The protest by these forces on the floor was wonderful to see, in that it challenged, even if in a limited way, the status quo. Signs of “No TPP” were displayed vibrantly, shouts of “No war, No more drones” were reported throughout the convention. Speakers were interrupted repeatedly with these slogans as well as cries of “Bernie, Bernie, Bernie.”

A highlight was when shouts of “No more war” greeted former Secretary of Defense Leon Panetta as he addressed the convention. (Ralph Nader blog, July 29) Other sites reported shouts of “Liar, liar.” Sectors of the anti-war movement were clearly at the convention.

But at the end of it all, it was the corporate lobbyists, the establishment, the Pentagon and the Wall Street wing that prevailed.

Image as party of working class

The Democratic Party has long been seen as the party of the working class. Unlike the Republican Party of modern times, its social base has indeed huge numbers of union members, women, youth and people of color.

It is a progressive base, as it reflects the reality of the lives of workers. It is not unusual to see some of these Democrats at revolutionary events or demonstrations against war and racism or for higher wages.

This base was visible not just on the convention floor but on the podium as well. Because of the strength of the progressive movement, especially in this period of the Black Lives Matter and the immigrant rights movements, representatives of these struggles were allowed to address the convention.

It demonstrates Frederick Douglass’ creed: “Without struggle, there is no progress.”  And the Black community has definitely been in struggle.

One of the most moving moments of the convention was Tuesday night, when nine African-American women whose children had been killed by police terror or racist vigilantes took the stage.

Trayvon Martin’s mother, Sybrina Fulton, stated, “This isn’t about being politically correct. … This is about saving our children. That’s why we’re here, tonight, with Hillary Clinton.”

It should be pointed out that Tamir Rice’s mother, Samaria Rice, told Fusion earlier that no candidate is “speaking my language about police reform.”

Alternet.net noted that Mothers of the Movement was Number Three of the 10 Top Moments of the DNC. Their top three, in fact, all had to do with women.

Number Two Top Moment was Michelle Obama’s exceptionally moving speech, which included: “That is the story of this country, the story that has brought me to this stage tonight, the story of generations of people who felt the lash of bondage, the shame of servitude, the sting of segregation, but who kept on striving and hoping and doing what needed to be done so that today I wake up every morning in a house that was built by slaves.”

Other moments that reflected the struggle of the oppressed included actress Eva Longoria, who took a line right out of the movement for Chicano rights: “I didn’t cross the border, the border crossed me.”

One might add that many an activist grimaced at this, for it occurred in the political party that represents the very same class forces that continue to rob and steal Mexico to this very day.

Herein lies an example of the incredible cynicism manipulated in Philadelphia.

While the social base of the Democratic Party reflects working people, the party does not reflect their class interests.

While the struggle has forced the Democratic Party to co-opt some issues, the party nonetheless reflects the class that continues to exploit, bomb, deport and kill workers and oppressed here and around the globe.

Who really called the shots at the convention? What really came out of it, despite all the platitudes mouthed regarding issues of the oppressed?

The donors who were actually paying for much of the convention are anonymous. But it is not a mystery. While the convention floor rocked with chants, yells and much hyperbole, the real seat of power was elsewhere. The workers and oppressed might have thought they were making a difference challenging the Democratic Party inside the convention, but it was Wall Street that was still calling the shots.

Executives from JPMorgan Chase, Johnson & Johnson and Verizon were just some of the many winers and diners in the very expensive hotel rooms throughout the city.

The website Sunlight Foundation, a nonprofit organization that aims to make “government and politics more accountable and transparent,” reported, “The power some lobbyists hold over both parties … and the White House is well documented. But what’s not well documented is how lobbyists play a role in the Democratic Party’s nominating process.”

The issue of super-delegates became key with regard to the Sanders movement. According to Sunlight, these delegates can support “whomever they choose and are not bound by any primary or caucus result,” adding, “some of the superdelegates also happen to be lobbyists for interests like big banks, payday lenders, health care insurers.”

“According to disclosure documents from the Nevada legislature, as recently as 2015 Ramirez represented a company called Community Loans of America Inc., which is the parent company of several payday and title loan lenders” — a total vulture that feeds off workers in crisis.

Sunlight concludes, “In short, [the super-delegates are] the embodiment of the institutional Democratic Party — everyone from former presidents, congressional leaders and big-money fundraisers to mayors, labor leaders and longtime local party functionaries. Nearly six-in-ten are men, close to two-thirds are white, and their average age (as best we could tell) is around 60.”

In a July 25 Los Angeles Times editorial titled “Who Pays for the Democratic Convention?” Nikil Saval writes that “if you try asking [former Philadelphia mayor] Ed Rendell where he got the money, he won’t tell. He treats [it] like a national security secret — despite a court order to the contrary. On June 14, the Pennsylvania Office of Open Records ruled that the host committee was required to disclose its list of donor records immediately, but it refused to comply.”

All this behind-the-scenes power brokering has become a real lesson for the burgeoning youth movement and others around Sanders.

The millions who expected their voices to be heard through the Sanders movement were sold out by the lobbyists and the drone makers.

Nonetheless, a movement has arisen. The reality and contradictions between the platitudes of the politicians and what is really going on in society will continue to erupt and play out. It is understood why a mother who has lost her child to police violence hopes that a woman Democrat can be more helpful than a hateful racist demagogue. It is understood why a teen whose parents could be deported at any moment continues to put hope in the party that has carried out more raids than any other. The devil you know appears safer than the devil who wants to build a wall.

But many are now thinking about the need for a third option, which is one of the astounding outcomes of the DNC.

This paper has often written that it does not matter who is in the White House, it matters who is in the streets. That remains true.  But support for a third candidate would be further proof of the growing disenchantment in this country. It would mean a further break of sectors of the working class from the bosses’ party, the Democratic Party, and that is a step forward for the struggle.