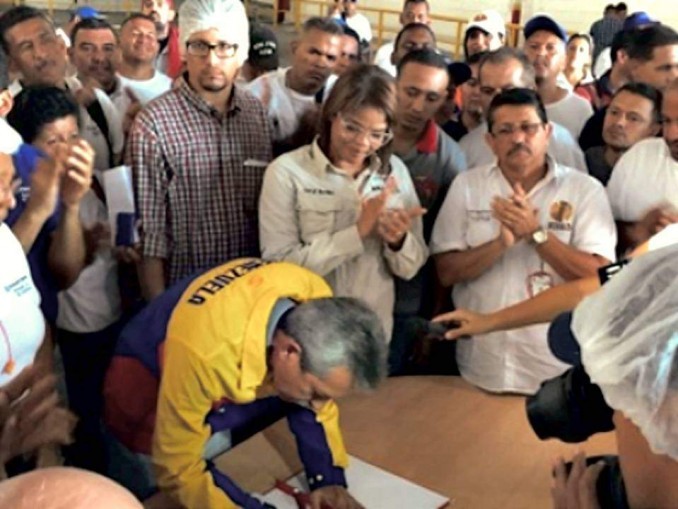 Nearly a thousand workers at a large, former Kimberly-Clark plant in Venezuela are back on the job, making sorely needed personal care products like toilet tissue, sanitary napkins and diapers. But they’re not working for the U.S.-based company any more. They’re working for themselves and the Venezuelan people.

When the price of oil dropped precipitously last year, due to oversupply on the world market caused largely by the surge of petroleum coming online from U.S. fracking and other new technologies, it hit especially hard those governments that get most of their national income from petroleum exports. Like Venezuela.

The U.S. has been opposed to the Venezuelan government ever since Hugo Chávez was elected president in 1998 and declared the Bolivarian Revolution. With the help of Cuba and with much political support throughout Latin America, Bolivarian Venezuela has brought health care, education and better housing to millions of poor people. But most of the economy has remained in the hands of the bourgeoisie, a wealthy ruling class accustomed to exerting a great deal of power in collaboration with the U.S. ever since the 1920s, when the Rockefeller dynasty began exploiting Venezuelan oil.

Chávez died in 2013 and his successor, President Nicolás Maduro, a former bus driver, has been hard-pressed to counter the economic sabotage being waged by the imperialists and their Venezuelan collaborators, who have taken advantage of the severe drop in oil prices to step up their efforts to bring down the Bolivarian government. Part of this rightist campaign has been to deliberately cause shortages of needed consumer goods in order to wear down the spirit of the revolutionary masses.

This certainly appears to have been the case at Kimberly-Clark, where the company shut down operations and sent the workers home, claiming a lack of raw materials. But the workers knew otherwise, and they convinced the government to support them in reopening the plant.

So it was that on July 12, the Labor Ministry approved the workers’ request to occupy the plant and resume production — under workers’ control. President Maduro told the country on state television: “Forty-eight hours ago, without notice, a U.S. company called Kimberly-Clark, violating national laws and the constitution, fired almost 1,000 workers from its production plant, closed the door and left the country. … Kimberly is now in the hands of the workers — producing, working, and we are going to invest the necessary resources in order to consolidate [the plant’s operations].”

“What we cannot accept,” he continued, “is that a few owners can come and, from one day to another, close the doors and kick out the workers.”

According to venezuelanalysis.com, “Under Venezuela’s 2012 Labor Law, mass firings are strictly prohibited and firms that shut their doors illegally are liable to be reopened under workers’ control. … According to Venezuela’s Labor Ministry, the plant has a monthly output of 33 million diapers, 20 million sanitary pads, 27 million thin liners and 17 million rolls of toilet paper — all of which was brought to a standstill due to the closure. Following the workers’ takeover, the factory is now operating at full capacity.”

This one plant supplies 20 percent of Venezuela’s need for these products.

Some 96 percent of Venezuela’s foreign currency comes from oil sales abroad. Since the price of Venezuelan crude oil has moved back up to $40 a barrel from a low of $24 in February, the government has more resources at its command to thwart this kind of economic sabotage by U.S. corporations and their Venezuelan collaborators.

The Maduro government has backed up its words with a commitment to invest $22 million in the plant’s operations — enough to keep the plant supplied with raw materials until the end of the year.

This move by the Maduro government is undoubtedly popular with the workers of Venezuela. It could lead to more efforts to liberate essential facilities from the grip of their class enemies, who would prefer to see the people suffer rather than lose their privileged existence.