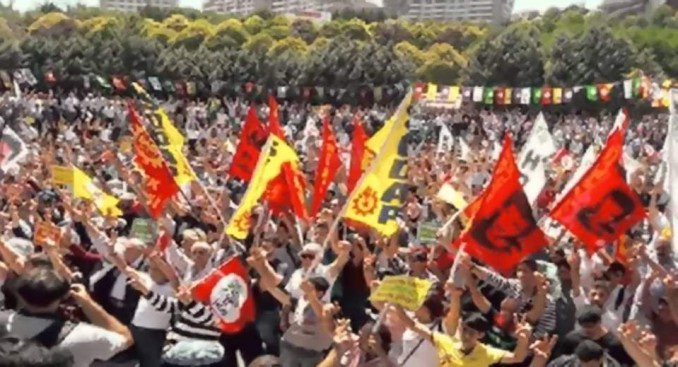 Aug. 1 — Two weeks after the collapse of an attempted coup, Turkish President Recep Tayyip Erdoğan and the ruling Development and Justice Party (AKP) have yet to stabilize the Turkish government and state.

The AKP regime has concentrated its repression on those it considers members of the Hizmet organization, led by Fethullah Gülen, who Erdoğan blames for organizing the coup. Gülen has been living in exile in the United States since 1999. Before 2013 he and his group were allied with Erdoğan and the AKP.

Neither the Erdoğan nor the Gülen forces represent the working class nor any real anti-imperialist position. They both stand for the continued oppression of the Kurdish community, who make up 18 percent of the 80 million people living in Turkey.

On July 24, the CHP — a former ruling party representing the followers of Kemal Ataturk, the founder of modern Turkey in the 1920s, and now second in parliamentary seats — held a demonstration in Istanbul’s Taksim Square of hundreds of thousands supporting the AKP against the coup makers. AKP speakers also participated. The labor union confederations DISK and KESK supported this action.

Erdoğan met with and got support from the leaders of the CHP and also the MHP, the ultra-right party that is fourth strongest in Parliament. He has not sought a meeting with the social-democratic, pro-Kurdish HDP coalition, even though this party spoke against the coup.

On July 23, the HDP held a demonstration in Sultangazi Park in Istanbul against the July 15 coup, but also against the “countercoup,” the repressive moves by the AKP ­government.

On July 31, Erdoğan said he would have the legal authorities drop charges of “insulting the president” against 2,000 people, many of them journalists. Erdoğan’s government, in office for a decade, has increasingly repressed media coverage in the past few years.

While it is impossible to rule out future attacks on the opposition parties, especially against the social-democratic HDP, or repression of the media, as of now the AKP has struck hardest against members of the military, police, government officials and educators.

Since the coup failed, the Turkish regime has detained, removed or suspended “more than 60,000 people in the military, judiciary, civil service and schools” over suspected links with Gülen’s organization, according to a July 31 Reuter article. About 150 generals and admirals — 40 percent of the top officers — have been forced to accept dishonorable discharges, along with nearly 1,400 midlevel officers and nearly 9,000 ordinary soldiers.

While the AKP and Erdoğan have been able to consolidate political authority and bolster executive power with a 90-day state of emergency declared in the wake of the coup, it is at the cost of disrupting the command structure of the army and the police.

Turkey, a regional power across West and Central Asia, also has the second-largest army in NATO. The fate of Turkey’s army concerns the Western imperialists. The Pentagon, which has trained Turkish officers since the 1950s, depends on Turkey as a military ally against Russia and Iran that provides important bases, like the airbase at Incirlik, which enable the U.S. to intervene in the region.

By all indications, the July 15 coup attempt, though a serious bid to seize power — hundreds died, thousands were wounded — was launched prematurely in anticipation of Erdoğan and the AKP carrying out a purge. This begs the question: Who within the military might have supported the coup had it been launched decisively and appeared to be winning?

The Turkish daily newspaper Yeni Şafak, which is reputedly close to the AKP, reported last week that retired U.S. General John F. Campbell, who commanded U.S. troops in Afghanistan, had over the past year funneled $2 million to Turkish generals to support a coup by the Gülen forces. Campbell and the U.S. government deny this.

Former CIA officials urged the U.S. government to approve Gülen’s first application for residence, indicating a possible working relationship. It is standard for U.S. agencies to establish contacts throughout society in any important country, and in Turkey the U.S. trained much of the military.

Turkish government spokespeople have demanded that the U.S. extradite Gülen back to Turkey. Their implicit message is that by deporting Gülen the U.S. can show good faith with the Turkish government. Otherwise, they say, we have a problem.

Erdoğan’s criticism of the U.S., along with the criticism he faces from other NATO members in Europe, gives him the appearance of independence from imperialism. This may help him win support from the population, which is much more anti-imperialist than his regime.

Erdoğan and the AKP have recently taken steps to win more room to maneuver Turkish foreign policy in defense of perceived Turkish national interests. This includes apologizing for shooting down a Russian plane on the Turkish-Syrian border. The Turkish ruling class is bound to world imperialism by economic, diplomatic and military ties, however, and Erdoğan’s rule won’t change this.