“The military has long used its discharge system as a mighty club over the heads of its troops. When troops, individually or collectively, refuse to go along with whatever the latest idiocy the military comes up with, there is always some officer around to threaten a bad discharge.” The Veteran, April/May 1982 (a publication of Vietnam Veterans Against the War, VVAW) 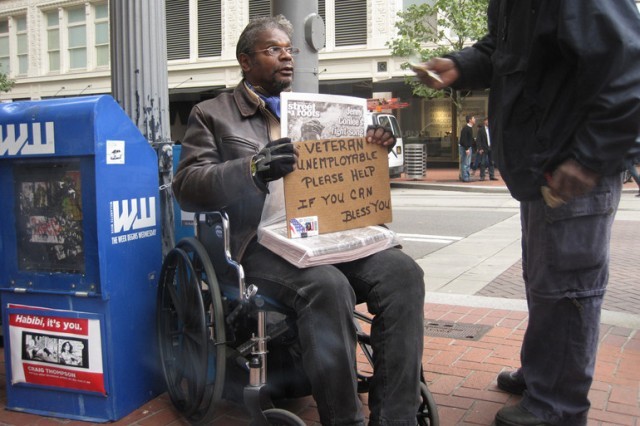 Decades after the VVAW wrote those words, the Pentagon’s policy has not changed. It has used this tool of military discipline against over 600,000 post-Sept. 11, 2001, veterans, according to a study by the veterans service organization Swords to Plowshares. (swords-to-plowshares.org)

The Servicemen’s Readjustment Act of 1944, also known as the G.I. Bill, offers funds to veterans for college education, unemployment insurance and housing. The U.S. Department of Veterans Affairs, formerly called the Veterans Administration, is funded to provide medical, social and rehabilitative services. Veterans with discharges other than honorable are regularly denied these benefits and services. These so-called “bad paper” discharges include “General,” “Other Than Honorable Conditions,” “Bad Conduct” and “Dishonorable.”

In many cases the “bad paper” discharge results from issues connected to in-service injuries and trauma such as post-traumatic stress disorder, traumatic brain injury, substance abuse and military sexual trauma.

The Marine Corps, in particular, targets young women and men recruits with an aura of everlasting comradeship under the slogan of “Semper Fidelis” (always faithful). The reality for Marine combat veterans of Iraq and Afghanistan is that those with PTSD are 11 times more likely to receive a “bad paper” discharge than those without PTSD, and “1 in 10 are ineligible for benefits.” Veterans “are being refused benefits at the highest rate since the system was created at the end of World War II.” (New York Times, March 30)

Many of these veterans end up in the streets, shelters or stressful family arrangements. They are denied any help for their medical conditions. There is an appeal process — but it can take years to get treatment for emergency medical conditions, such as those where a suicide hotline is regularly called.