In March last year a coalition of Gulf states led by Saudi Arabia and supported by Washington began a daily bombing campaign and later ground operation in Yemen.

Over the last year, this war has accelerated, bringing in military forces from Egypt and Sudan in what is seen as a proxy war against the Islamic Republic of Iran and its growing influence throughout the Middle East and North Africa.

The aim was to halt and drive back the Ansarullah Movement (Houthis) in their seizure of territory in central and southern regions of the country. The Ansarullah are a Shiite-based movement that has formed a tactical alliance with elements of the Yemeni military, which remains loyal to former leader Ali Abdullah Saleh. 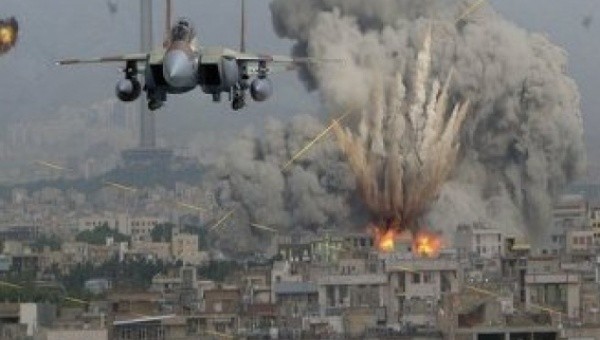 Despite several attempts to broker a ceasefire, the bombing of Yemen by the Saudi-led Gulf Cooperation Council continues, utilizing U.S.-manufactured warplanes, offensive weapons and intelligence sharing. The administration of President Barack Obama has provided diplomatic cover for the war against Yemen, a continuation of aerial bombardments and drone attacks that have taken place for several years.

On April 4, attacks by warplanes killed at least one person and injured many others in Yemen as the Gulf monarchies continued their bombing of residential areas across the country. Yemeni news agencies also reported that the Saudi-GCC bombing raids struck a camp for internally displaced people located in the northwestern Hajjah Province, leaving at least six children and one woman injured. These bombing operations hit the Lamrour district of al-Shahel, a city in Hajjah.

According to Yemen’s al-Masirah TV, the Saudi-GCC coalition also carried out bombing raids in Sa’ada, in the north of the country, destroying homes and killing one person. Additional reports said air strikes bombed a telecommunications installation in Saqayn as well as a post office in Haydan. The reports noted that a number of houses were struck in the operation. The two cities are located in the Sa’ada Province, an Ansarullah stronghold.

An April 4 Press TV article stated, “The Saudi attacks on Monday [April 4] came as Ansarullah fighters and allied army units continued to launch reprisal attacks on Saudi and pro-Saudi military positions inside and outside Yemen. Yemenis managed to kill scores of Saudi forces in one such attack on troops in Rabuah region, southern Saudi Arabia. The allied forces also launched missile attacks on Saudi-led forces in al-Naser military base, located between Yemen’s Jawf and Ma’rib provinces.”

Meanwhile, resistance efforts on the part of the Ansarullah and its allies are complicating the war for the U.S.-backed Saudi-GCC coalition. In recent days Yemeni resistance fighters have taken 42 Saudi troops into custody in Bayda and Jawf provinces. Several other Saudi troops were killed in Ma’rib.

News reports claimed that the detained soldiers were being deployed to the west-central Ma’rib province to enhance the Saudi-GCC forces there when Yemeni forces captured them. The Yemeni forces launched a separate operation against Saudi troops using Katyusha rockets in Ma’rib city, resulting in six deaths and 17 wounded. (sabanews.net, April 3)

Attacks were carried out by Saudi-GCC warplanes in Taiz, the third-largest city in the country. Saba News agency reported April 4, “Saudi fighter jets waged on Monday [April 4] a series of air raids on many areas in Taiz province, a local official said. The war jets targeted al-Shuqirah market in the central district of al-Wazeyah, leaving damage to houses and private properties, the official added.”

This same report emphasizes, “The warplanes targeted al-Siteen Street, in the north of Taiz, with several raids leaving serious damage to a number of houses and roads in the area. The Saudi aggression also waged many sorties on Warazan and Khadeer areas in the south of Taiz city, the official added.”

It has been estimated by various news and humanitarian sources that up to 10,000 people have died in the intensified fighting in Yemen in the last year. Meanwhile, 80 percent of the population is in dire need of assistance.

A United Nations Children Education Fund report published on March 29, “Children on the Brink,” said that millions of people are being negatively impacted by the war. Children and women have been affected severely through the aerial strikes, ground operations and the attacks on civilian areas, including neighborhoods, internally displaced person camps, schools and medical facilities.

Statistics cited by UNICEF indicate that 63 health care facilities have been bombed and severely damaged, while most hospitals and clinics report extreme shortages in equipment, supplies and personnel. Repeated bombing operations have resulted in sporadic access to electricity.

A news release announcing the report reads: “UNICEF verified more than 1,560 incidents of grave violations against children in Yemen. As a result, over 900 children were killed and more than 1,300 were injured in the past year alone. … With more than 50 verified attacks on schools, children were also killed while at school or on their way to or from school. These numbers represent the tip of the iceberg as they only indicate the cases that UNICEF was able to verify.”

Moreover, the UNICEF report stresses: “The disruption of the inflow of food and fuel as a result of the violence and restrictions on imports has paralyzed the delivery of basic services across Yemen. Beyond the direct impact of the war, UNICEF estimates that nearly 10,000 additional deaths may have occurred among children under five years old in the past year due to preventable diseases as a result of the decline in critical health services including immunization and the treatment of diarrhea and pneumonia. This figure is in addition to the nearly 40,000 children who die every year in Yemen before their fifth birthday.”

With the U.S. military and security apparatuses coordinating the war by providing fighter jets, ordinances, refueling technology, intelligence sharing and diplomatic cover for the Saudi Arabia-GCC coalition and its allied militias, Washington is culpable in the current strife. The impact of the military campaign aimed at the Ansarullah over the last year is compounded by periodic drone attacks ostensibly targeting al-Qaida and its partners inside the country.

Resistance by the Ansarullah and other allied forces is formidable, with ongoing attacks in Yemen and the spread of the war into eastern Saudi Arabia.

Another ceasefire has been announced for April. But if the recent past is any indication the airstrikes and targeting of civilians will only intensify and therefore worsen the conditions for people living in Yemen.