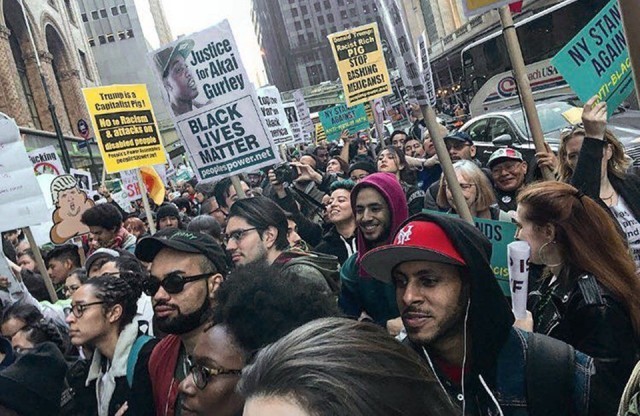 Thousands of people, including large contingents of striking Fight for $15 workers, took to the streets here against racism on April 14.

Protesters stormed the $1,000-a-plate Republican fundraiser at the Grand Hyatt with disruptions, banner drops and marches throughout the Grand Central complex adjoining the posh hotel, while outside thousands protested the billionaire candidate’s bigoted message. It was Donald Trump’s only major New York campaign appearance so far in 2016.

That morning, hundreds in Brooklyn demanded justice for Akai Gurley against the prosecution’s outrageous no-jail-time recommendation for former New York Police Department member Peter Liang, Gurley’s killer. Sentencing was postponed until April 19. Protests to demand that officer Liang and the NYPD be held accountable will continue on that date.

The huge turnout and fighting street tactics made it clear that, even with the Democratic debate scheduled later that night in Brooklyn, people were not waiting for the presidential candidates to stop the systemic racism embodied by the Trump phenomenon and police killings.

Instead, the rallying cry was “Shut it down!” The diversity of tactics, along with the unity of message, was organized by the Shut Down Trump NYC Coalition, initiated by the International Action Center. The coalition included the People’s Power Assembly; Shut It Down NYC; ICE-FREE NYC; Millions March; Pakistan-USA Freedom Forum; Queer Detainee Empowerment Project; Showing Up for Racial Justice; Workers World Party; South-Asian Fund for Education, Scholarship, & Training; Bangladesh American Community Council; May 1 Coalition; We Will Not Be Silent; ANSWER; Stay WoQ; Black & Pink NYC; Bend the Arc; Global Revolution Media; and Iraq Veterans Against the War.

Famous 42nd Street was packed with anti-Trump demonstrators along a three-block stretch, from Madison Avenue to Lexington Avenue. The Grand Hyatt, where GOP donors were dining, and Grand Central Station resounded with chants against racism. The rally of thousands in front of the Hyatt included representatives from groups marching from Times Square and groups organizing direct actions.

Solidarity with many forms of resistance

The day was well organized into permitted Green zones and direct action Red zones. There was active solidarity against racist violence and vicious bigotry that has targeted Muslims, immigrants, women and LGBTQ people. There was powerful unity among the thousands of participants engaged in many forms of resistance.

The status of the GOP fundraiser as a private event gave it no protection from multiple disruptions. Before the event started, 10 protesters stormed the hotel mezzanine with a banner that read “NYC rejects the Party of Hate.”

Another group of protesters orchestrated a successful banner drop from a tenth-floor window. Underneath, in Grand Central station, protesters with the People’s Power Assembly dropped a banner reading “Shut Down Fascism in NYC — Black Lives Matter.” They were whisked away by Apple Store security, part of the coordination among the NYPD, Secret Service and many local agencies.

That banner led one of the biggest marches through the station — one of many that crisscrossed the cavernous Grand Central complex. There was also a constant presence at the station’s central clock by activists from We Will Not Be Silent, who held up signs that read “Racism Is Deadly,” “Shut it Down” and “Silence Is Not an Option.”

Outside, the crowd more than doubled when Fight for $15 workers marched five blocks from their huge rally at 42nd Street and Seventh Avenue. The New York rally was part of a nationwide strike by fast food workers in 300 cities.

In addition to showing solidarity with the Black Lives Matter movement by protesting for Akai Gurley that morning in Brooklyn, the fast food workers devoted their one-day national strike to Jeffrey Pendleton, a Burger King worker who died in police custody in New Hampshire after he couldn’t afford to put up $100 bail in March.

Akai Gurley’s aunt, Hortencia Petersen, addressed Trump and the crowd outside the hotel, saying, “How are you going to make America great again? Is it by buildings? Is it by discriminating against women? White supremacy is not acceptable in New York City.”

The fundraiser featured Trump as well as Republican candidates Ted Cruz and John Kasich — all three well known for their anti-Muslim, anti-immigrant and anti-woman policies. The NYPD treated protesters of those policies as the criminals. At least 31 were arrested.

A good number were brutalized by the police as well. Among them were Charina Nadura and Juan Carlos Dávila, journalists with the independent radio show Democracy Now! While filming the NYPD beating and arresting people attempting to enter the hotel, Nadura and Dávila were themselves attacked and arrested. They were released after five hours. Others were held until at least 2 p.m. the next day.