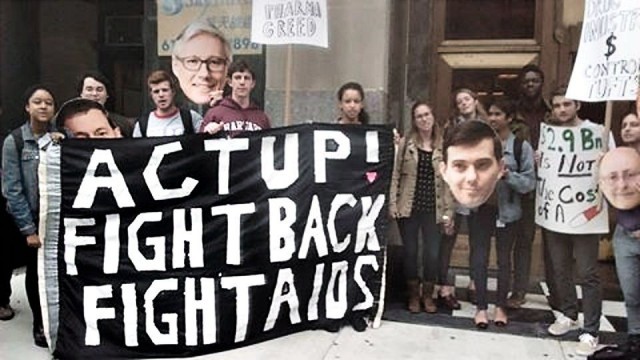 In a highly organized act of international solidarity, 25 groups led by ACT UP (AIDS Coalition to Unleash Power) carried out marches and protests on April 1 against the drugs-for-profit industry, declaring with one loud voice, “People before profits!”

Pfizer Pharmaceuticals was targeted by ACT UP New York, Health Global Access Project and others. Pfizer is relocating to Ireland to take advantage of lower corporate taxes there. Greed has no borders for Pfizer, which earned a net income of $31 billion for the years 2014 and 2013 ($12 billion of which was paid to stockholders). Even this was insufficient for CEO Ian Reed, who described 2015 as a “transformational year” in a report to stockholders. (pfizer.com)

ACT UP Boston marched on the Tufts Center for the Study of Drug Development, which released a report in January claiming that it costs drug companies $2.9 billion to bring a new drug to market. This is an increase from their 2001 estimate of $802 million per drug. (“The Truth About the Drug Companies,” Marcia Angell, 2005) Tufts refused, then and now, to disclose the names of the pharmaceutical companies whose data was used in the report.

ACT UP London marched on Gilead Pharmaceuticals, the leading producer of HIV/AIDS medications, including the most-prescribed HIV med, Atripla, as well as Truvada. Truvada costs 446 pounds per month ($634 per month in U.S. dollars) — too expensive for use by the British National Health Service. (theguardian.com, April 1) In 2015, Gilead earned an incredible $18 billion on sales of $32 billion — a profit rate of 56 percent. (Gilead 2015 Earnings Report)

Reaching a new level in the struggle, ACT UP Paris, New York, London, Boston and other members of this new international coalition are increasingly targeting the profit system itself, going beyond the demands of decades ago to rush new meds to market to save lives as soon as possible. In recent years, the focus of lobby groups like AIDS United, Treatment Action Group, AIDS Action Council and others has been to urge immediate generic pricing or lower prices for particular medicines.

However, the deepening of the capitalist crisis has caused more and more activists to recognize that the drive for profits, as part of capitalism’s inherent and systemic greed, must be dealt with directly as a class struggle. Reforms are totally inadequate to save lives when those that need medicines cannot afford them.