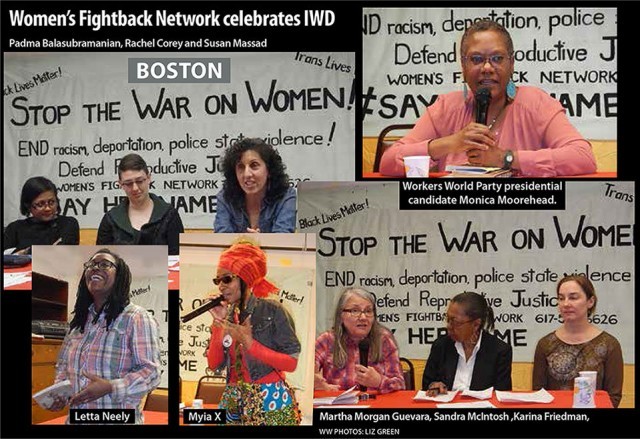 Boston — Under the banner, “Uphold the Legacy of Women’s Resistance,” the Women’s Fightback Network held a powerful International Women’s Day celebration on March 26, uniting the anti-imperialist struggles of women globally, from Puerto Rico and India to Pakistan and Honduras, with the Black Lives Matter, immigrant rights and LGBTQ people of color movements confronting racist police violence, state repression and anti-trans bigotry in the U.S.

The voices of Sweet Honey and the Rock singing “We are the Ones” reverberated through the room as co-chairs Myia X and Rachel Hassinger invited the multinational, intergenerational crowd to share the resistance writings of Lolita Lebrón, Assata Shakur and the Dalit women of India.

Martha Morgan Guevara, a Spanish teacher and volunteer with Centro Presente in East Boston, spoke passionately about her work supporting immigrant families, mainly women and children, who have been forced to migrate to the U.S. from their homelands and are living with severe trauma and the daily threat of deportation.

Sandra McIntosh, teacher and co-chair of the Coalition for Equal Quality Education, paid homage to the women who influenced her life by saying their names, including Harriet Tubman, Sojourner Truth, Ida B. Wells, Shirley Chisholm (the first woman to run for U.S. president), anarchist Emma Goldberg and Berta Cáceres, the Indigenous Honduran activist tragically murdered by U.S.-backed mercenaries in March. She shared with the crowd an old African proverb: “As long as someone remembers you, you will live forever.”

Freelance writer Karina Friedman focused on women political prisoners, highlighting the case of Dr. Aafia Siddiqui, a Pakistani-born Muslim activist, mother and honors graduate of the Massachusetts Institute of Technology and Brandeis University. In 2003, she was kidnapped, imprisoned and brutally tortured under the “global war on terror” and currently remains incarcerated at FMC Carswell, a U.S. military prison in Texas. The WFN, which has joined with the national Aafia Foundation in demanding her freedom, helped organize a demonstration on the steps of MIT in Cambridge, Mass., on March 8, to raise awareness about Dr. Siddiqui’s unjust imprisonment and demand her repatriation home.

Workers World Party presidential candidate Monica Moorehead spoke on the revolutionary history of International Working Women’s Day and its origins in the heroic struggles of immigrant women garment workers in New York City following the Triangle Shirtwaist Factory fire in 1911. Subsequent workers’ strikes shook the capitalist system in the U.S. and inspired women socialists in Europe to call for the creation of a global day of solidarity with women workers’ struggles as a concrete gesture of solidarity.

Moorehead also saluted the Black Lives Matter movement and heroic LGBTQ movements, linking arms in the fight against racism, bigotry and oppression. She addressed the Hillary Clinton campaign, emphasizing how Clinton does not represent the interests of poor and working-class women. Moorehead explained how socialism cannot be voted in and must be fought for by people’s movements; and that racism, sexism and anti-LGBTQ bigotry cannot be voted away. The bourgeois elections come and go every four years but the conditions stay the same or worsen, unless there is an independent fightback movement led by the workers and oppressed to defend our interests.

Revolutionary warrior poet Letta Neely uplifted and strengthened the crowd with readings from her book of poems called “Juba,” including a special tribute to the four little Black girls killed in the church bombing in Birmingham, Ala., in 1963: “Which patent leather shoe belongs to which found leg?” She reminded the crowd that the same oppressive system that bombed those children continues to murder our children today, and urged the crowd to keep building a movement that will sweep away these conditions completely.

Dr. Padma Balasubramanian reported on the student movement in India, its fight against the privatization of education (as demanded by the World Trade Organization and the World Bank), institutionalized discrimination against Dalit students (formerly called untouchables), the criminalization of dissent, and state terror against students and academics who speak up. Student communists and socialists are now joining hands with brave students from the Dalit caste to fight the rampant injustices created by capitalism and imperialism.

Rachel Corey, an organizer with the Criminal Justice Policy Coalition, spoke about the growing campaign to stop the construction of a new women’s prison in Massachusetts. She urged the crowd to join the local movement for a moratorium on building any new jails while also calling for bail reform, alternatives to mass incarceration and to vote against the Massachusetts bill S1297.

Professor Susan Massad reported on the March 20 Washington, D.C., anti-Zionist protest outside the annual American Israel Public Affairs Committee Policy Conference, opposing U.S. financial support for Israel. She also gave an update on Palestinian activist and attorney, Rasmea Odeh, who was arrested and imprisoned for “unlawful procurement of naturalization.” On Feb. 25, a ruling from the 6th Circuit U.S. Court of Appeals determined that the trial judge who sentenced Odeh, Gershwin Drain, wrongfully barred expert torture witness Dr. Mary Fabri from testifying at the trial. The case will be remanded so that admissibility of the expert testimony can be determined. Supporters are hopeful that Odeh will get a new trial.

The meeting ended with a revolutionary salute from Myia X to the founding members of the Women’s Fightback Network, now celebrating 15 years of organizing together. X said: “Solidarity is our most potent weapon, so let’s keep building and uniting our struggles to confront and abolish the system that oppresses us.”