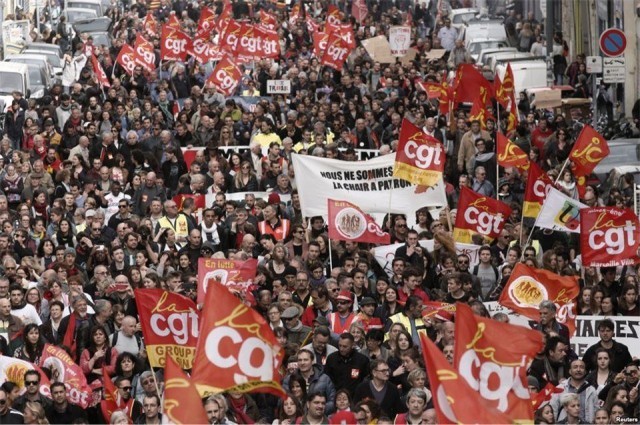 “Work more, earn less!” Give your boss more flexibility so you can be “laid off more easily!” were some of the key criticisms of the new labor law that French workers explained to TV reporters were why they were protesting on March 31 in Paris and 250 other French cities and towns.

The General Confederation of Workers estimated that 1 million workers, from both the private and the public sectors, also took part in the protests, along with 200,000 university and high school students and youths.

“No more steady jobs” and “No reward for all the studying we’ve done!” were the negative comments on the new law from the students who marched with the workers.

The unions representing most of the students participating in the protest issued a statement the day before explaining why they acted: “For the youth, this proposed labor law is a signal to increase inequality and poverty with no job security.”

Public transportation in the Paris metropolitan area, as well as a number of other urban areas, was severely disrupted. The seven unions that issued a call for the general strike estimated thousands of work stoppages occurred. (Le Figaro, April 2)

High school students came out in part to support their teachers, who were on strike, and because cops brutalized a high school student in Paris during a smaller protest the week before. A video showing this brutality got over 2 million views on YouTube. The cop was arrested, and will go on trial in May on charges of unnecessary violence.

In Rennes, the cops beat a 60-year-old militant worker who wanted to occupy Parliament Square. His union is firmly defending him from the serious charges he faces, bringing this attack to the attention of the national media. (Libération, April 3)

Especially in Paris and Rennes, there were confrontations between cops and youthful protesters.

After the March 31 protest, a few hundred people gathered in Place de la République to show they wanted to continue the struggle even after the march was finished. They discussed what had happened, what should be done next and other issues roiling French politics, like terrorism, housing and employment. The cops evacuated them around 5 a.m., but, as organizers, they reacted by putting out a call on social media for a gathering the evening of April 1.

A few thousand people showed up, according to some videos posted on Twitter using the tag #NuitsDebouts. The gatherings spread throughout France. As of April 3, there were 18 such gatherings, according to a map on the Twitter page.

These Nuits Debouts, or Up All Night, like Occupy sites in the U.S. in 2011, have set up canteens, plus tables and tents to protect the books and leaflets being distributed. Participants are consciously trying to build a mass movement.

Another signal that a mass movement is building is that the left-of-center newspaper Libération is putting out a children’s book for ages 8 to 12 on the issues involved in the struggle against the revision of the labor law.

The unions intend to keep on protesting until the bill for a new labor law is withdrawn. The Socialist Party, which manages the government of capitalist France, is split by the attempt to impose the new law, with many rank-and-file members opposing it. Prime Minister François Hollande has insisted he will impose the anti-worker law. Whether he can will depend on the level of mass resistance.