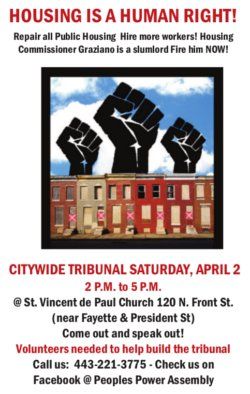 Baltimore — In response to the deplorable and inhuman conditions of this city’s housing projects, several groups came together on April 2 for the first-ever citywide Tribunal on Housing.

The Baltimore People’s Power Assembly, the Southern Christian Leadership Conference and the Ujima People’s Progress Party sponsored the event at the St. Vincent DePaul Church in the heart of downtown Baltimore.

For months, the People’s Power Assembly had interviewed and gathered information, photos and petitions from residents who have been lodging complaints against the Baltimore City Housing Authority and its commissioner, Paul Graziano. They gathered data at McCullough Homes, Poe Homes, Latrobe Homes, Douglas Homes, Perkins Homes and, last but not least, Gilmore Homes, where the arrest and killing of Freddy Grey in police custody had set off widespread protests.

The trigger that led the PPA to mobilize in the communities was when a city employee, Lucky Crosby, who monitored homes needing repairs, heard a number of complaints from residents who had been threatened or coerced into having sex in return for repairs. When Crosby reported these documented incidents, he was terminated by the Baltimore Housing Commission. American Federation of State, County and Municipal Employees Union Local 647 is in litigation defending Crosby, who is an executive board member of the union, over punishment he received for whistleblowing on these events.

Housing Commissioner Graziano had known for some time that this extortion for repairs was going on. The PPA issued him a summons to appear before the tribunal. Sharon Black told reporters on March 29 that the summons was delivered to Graziano’s office and date-stamped by the BHC Legal Department. “We will see if he abides by the summons,” Black said. “Graziano can’t say he doesn’t know — as he did during the ‘sex for repairs’ scandal. All he has to do is attend and hear from the residents themselves and see the documentation that our residents have collected. Public housing is slum housing and is a violation of the United Nations charter on human rights.”

The PPA presented photos for the judge and jurors to examine as well as testimony from residents of different housing projects. Graziano was found guilty by the tribunal for the following housing code violations: no heat; mold; pest infestations, including mice, roaches and bedbugs; broken windows and doors; unhealthy water; broken plumbing; overcrowding; broken appliances; holes in ceilings and walls; broken railings; and lack of timely repairs, despite repeated requests by the residents.

Many individuals and residents testified. President Anthony Coates of AFSCME Local 647 said these problems have been ignored for 13 years.  A housing project activist said the ultimate goal of the city is to privatize housing, pointing out that $600 million of Baltimore city taxpayers’ money went to Harbor East for business development, while the city has 30,000 vacant and boarded-up homes.

PPA activist Steven Ceci played a tape recording of a McCullough Homes manager threatening residents who go to the tribunal with eviction. Commissioner Graziano was also present at that confrontation to back up the manager’s threat. Floyd Vines, an electrician for city maintenance workers at the J. Van Story Branch of Senior Housing, said that “corruption is so deep in public housing that it is unfathomable.”

President Lorraine Ledbetter of the Poe Homes Tenants Association testified that every time money was invested in the University of Maryland, adjacent to Poe Homes, both the city and the university promised they would also invest monies to rehabilitate Poe Homes. In 15 years, over $1 billion was loaned or invested in the UMB, yet Poe Homes still had a deficit. Ledbetter questioned why so much money went to wealthy white men for business development and not to provide housing and jobs for people living in the housing projects.

People’s Judge Ariane McBride, herself a transitional housing resident, testified about transitional housing: “It is where the residents, mostly women and children, are waiting to move into established housing projects. However, the complex also is in need of repairs and is severely mismanaged.” Inspectors and managers make “surprise visits” and then blame residents for the disrepair, including broken lights and appliances. Most of the young residents with children are too scared to speak out, and so far six to seven families have lost their transitional housing status, meaning they are evicted and cannot apply for public housing for three years.

One of the jurors said: “We cannot be color blind. This is a city that is almost 70 percent Black. This is a trend happening in all the large metropolitan areas of the U.S.: move Black people out of the city and give them Section 8 housing in the suburbs, then attract white yuppies into gentrified areas of the city, where they can spend their dollars and enhance the growth of the city, similar to the situation in D.C., where wealthy white folks are becoming the majority of residents.”

The tribunal concluded with a number of action proposals: a fact-finding commission to continue the work with a follow-up meeting in May; a protest and caravan to Graziano’s residence; a campaign to demand jobs for housing project residents, especially the youth; that union apprentice training be given to carry out repairs and that the workers be paid $15 an hour; a campaign to stop gentrification; getting a city statute for greater whistleblower protection; and demanding a meeting with the Housing and Urban Development official at the national level.  All the judges and jurors noted this will be a protracted struggle and not a “one-shot deal.”