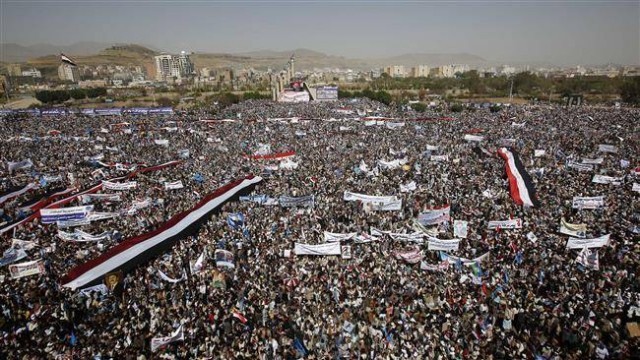 Yemeni people attend a rally marking first anniversary of Saudi Arabia’s war of aggression against the country in the capital, Sana’a, March 26.

Hundreds of thousands of people marched in Sana’a, the capital of Yemen, on March 26 to protest the U.S.-armed Saudi monarchy’s year-long war against their country.

In New York City, members of the U.S. Yemeni community and supporters gathered several hundred strong outside the United Nations the same day to show solidarity with the embattled homeland. Protesters marched from there to the Saudi embassy.

A statement by Stop the War on Yemen read: “Over 40,000 civilians, mostly women and children, have been killed by air bombing. The Saudi-led coalition’s siege and blockade of Yemen stopped food and medicine from entering the country, putting 30 million Yemenis in need and suffering from famine, especially children.”

The statement said that Yemen, home to one of the world’s oldest civilizations, is “being subjected to destruction and demolition and the people of Yemen are subjected to massacres, collective punishment and genocide by the Saudis, their coalition, their ISIS and Al Qaeda.” It pointed out that the Saudi claim of Iranian intervention in Yemen is a lie and that the Saudis are trying to overthrow Yemen’s elected democratic government.

The marchers called for an end to the Saudi bombing and blockade, an end to arms sales to Saudi Arabia, an end to diplomatic recognition of the Saudi puppet regime, emergency humanitarian aid to the people of Yemen and an international commission to investigate Saudi war crimes

Members of the International Action Center brought signs denouncing the U.S. role in the Saudi kingdom’s genocidal war. Speaking for the United National Antiwar Committee, Bill Dores said that the Saudi war against Yemen is as much a U.S. war as was Bush’s invasion of Iraq.

“The bombs and missiles that rain down on the people of Yemen are made in the USA, the planes that fire those missiles are made in the USA, the pilots that fly them are trained in the USA and the ships that blockade Yemen’s coast are made in the USA,” said Dores. “The Saudi kingdom has no independent military capacity. The U.S. ruling class, Wall Street bankers and oil billionaires are getting rich off this war, not only from the massive U.S. arms sales to the Saudi kingdom, but from the hundreds of billions of petrodollars the Saudi royals keep in U.S. banks. That is why people in the United States must take a stand against this war.”