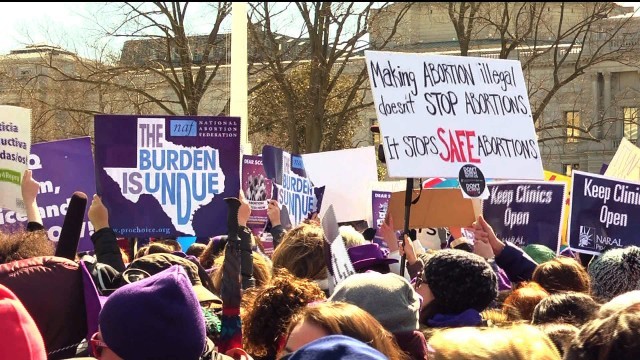 On March 23 in Washington, D.C., the area in front of the Supreme Court was filled with protesters, as attorneys in Zubik v. Burwell presented their arguments to the justices. Many young women students loudly and visibly demanded access to contraceptives as their reproductive right. Opposing them were nuns with huge signs denying those human rights under the sanctimonious guise of “religious liberty.”

Zubik v. Burwell’s lead plaintiff is Little Sisters of the Poor, a nonprofit nursing home run by nuns. It is the second case heard by the Supreme Court opposing the requirement that all employer-provided health plans provide birth control at no extra cost under the Affordable Care Act. It’s the fourth case opposing the ACA. Nine separate cases representing nonprofit affiliates of religious organizations — colleges, universities, hospitals and such — heard by nine appeals courts, were combined in this case.

In 2014, the first case against the ACA’s contraceptive mandate, brought by family-owned Hobby Lobby, set a precedent when the court ruled 5-4 that closely held private businesses could refuse insurance coverage of contraceptives they viewed as causing abortions (but which don’t do that, according to the medical profession) under the Religious Freedom Restoration Act of 1993.

The Zubik case contends that nonprofit businesses affiliated with religious institutions should receive the same contraception exemption as churches, temples and mosques and not be required to sign an opt-out form stating their religious opposition under the RFRA. They insist that filling out such a form makes them “complicit” in the “sin” of providing birth control — because it allows students and workers, who may or may not observe the religion, to obtain contraception.

However, according to the RFRA, all religious beliefs must not “significantly impinge on the interests of third parties.”

Who is more ‘burdened’?

Both Justice Samuel Alito and Chief Justice John Roberts asked questions exposing their ignorance of how the ACA insurance system works. They suggested that women get separate policies to cover contraceptives. The three women justices and U.S. Solicitor General Donal B. Verrilli Jr., representing the Obama administration, explained that making women get two sets of insurance was illegal and wouldn’t work.

Mother Jones summarized: “Verrilli explained that overwhelming evidence shows that even small cost barriers to contraception keep women from using it, which in turn results in more unplanned pregnancies and abortions. Congress wanted women to be able to get contraception seamlessly, from their regular doctors and through their regular health insurance plans.” (March 24)

“There has to be an accommodation, and that’s what the government tried to do,” said Justice Ruth Bader Ginsburg. (Nation, March 24)

To pose the question of whose rights would be more burdened — hundreds of nonprofit administrators who are allegedly morally offended while filling out forms once a year or thousands of women forced to make continual end-runs to get costly contraceptives? — makes the answer obvious.

The hearing exposed deep divisions among the justices. Four progressives faced off against four conservatives, including Justice Anthony M. Kennedy who occasionally joins the progressives. He sided with the conservatives in Hobby Lobby, though he wrote a separate concordance strictly limiting the ruling.

During the hearing, Kennedy flip-flopped, supporting the nuns’ argument at one point, while articulating the main contradiction at another: “It’s going to be very difficult for this court to write an opinion which says that once you have a church organization” entitled to an exemption, “you have to treat a religious university the same. I just find that very difficult to write.” (New York Times, March 23)

As in the Texas case the court heard on March 2 (see March 8 article in Workers World), Kennedy’s vote is critical. However, it is profoundly undemocratic that one justice’s decision would affect thousands of women.

Three scenarios are possible. First, if the court vote is deadlocked at 4-4, the rulings of nine appeals courts will stand. Eight voted against the nonprofits, allowing coverage, and one voted to uphold the RFRA claim, so students and workers in seven Midwestern states would not have coverage. But the tie would not set a precedent, so the case could be reopened with nine justices. However, many articles noted, if Kennedy joins the other three conservatives in a tie, that would contradict his Hobby Lobby decision — necessitating another court case.

Second, the court could vote to delay resolution of the case until a ninth justice is seated. Third, if Kennedy votes with the progressive justices for a 5-3 decision, students and workers will be able to access contraceptives through their insurance.

‘Historical Racism Matters’ in this case

“Even as unintended pregnancy rates have declined in recent years, racial and economic disparities have persisted. Moreover, historical racism in the health-care system has contributed to higher rates of maternal mortality among women of color compared to white women, which combined with other poor health outcomes have had an impact on the psychological, economic, and social vitality of these communities. If the plaintiffs in Zubik are successful, it could open up the door for many other nonprofit entities and for-profit businesses to opt out of providing contraceptive insurance coverage on which women of color depend.”

Shepherd concludes: “Contraception and counseling can help right some of the wrongs done to women of color in the area of reproductive justice and liberty. The Affordable Care Act contraceptive mandate takes us one step closer to such justice. It would be a grave injustice for the Supreme Court to allow the plaintiffs in the Zubik case — and others who might follow in their wake — to take us one step back.”

Kathy Durkin contributed to this article. Davis, a longtime reproductive rights and justice activist, is the author of the pro-choice novel “Love Means ­Second Chances.”