The Caribbean countries of Puerto Rico and Cuba, both located near the Zika hot zone, have similar peoples and climates — but a very different relationship to the Zika crisis.

Cuba, a sovereign socialist country, has been investing ample money and resources to nearly eliminate Aedes aegypti, the mosquito that carries Zika, dengue and chikungunya. Puerto Rico, as a colony of the United States, has been deprived of its political, economic and legal sovereignty, putting it at the mercy of the U.S. Congress and financial institutions. The island is expected to be hit hard by a surge of Zika over the next few months. 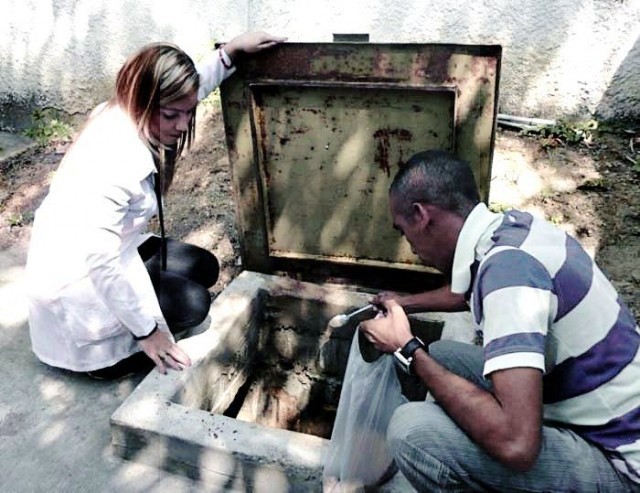 Cuba emphasizes public health and has prevented a Zika
outbreak with an aggressive campaign to monitor fevers
and clean up places where mosquitoes breed.
Photo: Granma

Zika arrived in Puerto Rico earlier than expected. As of March 23, there were already 258 locally acquired cases in Puerto Rico, including 35 pregnant women. (Centers for Disease Control and Prevention)

Only 20 percent of those who contract Zika show any of its mild, flu-like symptoms, but evidence shows that the virus can target fetal nerve cells, causing infants to be born with microcephaly — unusually small heads and incomplete brain development. Since Zika hit Brazil last year, a total of 863 cases of microcephaly have been confirmed and 4,300 more are suspected. (Livescience, March 22)

Zika is also linked to a rise in Guillain- Barré syndrome, a nerve disorder causing muscle weakness, paralysis and even death in adults. There has already been one reported case in Puerto Rico and new cases are predicted to arrive this fall.

This health menace comes at the worst possible time. Puerto Rico faces an unpayable $73 billion public debt and a 40 percent unemployment rate. Close to 58 percent of the people live in poverty.

Austerity measures forced by the U.S. government have led to the closing of hospitals and health care centers, reduction of services and migration to the U.S. mainland of thousands of medical professionals. Thousands of civic workers needed to fight mosquitoes have been laid off, leading the country to offer early release for those convicted of drug abuse in return for public service to help with the Zika crisis. 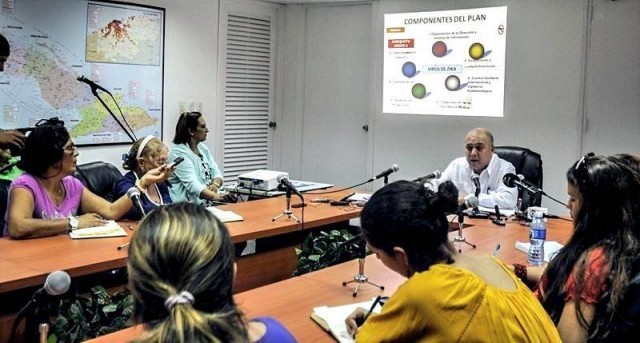 Puerto Rico’s colonial government has cut essential services in order to pay on the debt, putting the majority of Puerto Rican families in misery. The government has been privatizing or selling public property like the health services, phone company, industries and roads. (Workers World, June 4, 2015)

More than 3,000 doctors have left Puerto Rico for the U.S. to work in better conditions. The massive migration of Puerto Ricans to the U.S. South totaled 144,000 in 2014. Many are young college graduates, representing a real brain drain of Puerto Rico’s future.

Workers World reported last year on May 28: “There is only one pediatrician for every 900 children on the island. The infant mortality rate is 8.2 per thousand live births. There is a general deterioration of health in the population, including mental health, which presents itself as an increase in depression and suicide.”

Mosquitoes reproduce rapidly in standing water, so workers are attempting to seal all septic tanks and clean up dumps, junkyards, abandoned pools and houses, and areas strewn with water-catching litter like old tires. Although 900,000 discarded tires were cleared from residential areas, Thomas Frieden, director of the Centers for Disease Control and Prevention (CDC), said, “You just can’t remove all the standing water in Puerto Rico.” He added, “Really intense efforts to control mosquitoes have made very little impact.” (New York Times, March 19)

Aedes aegypti mosquitoes in Puerto Rico have developed resistance to permethrin, the main insecticide spray used for years in neighborhood areas. And the spray is quickly washed away with the rains. Roberto Barrera at the CDC said, “The growing resistance to permethrin is a blow for public health authorities hoping to limit the damage Zika may wreak in Puerto Rico.” (STAT, March 10) CDC experts are searching for alternative pesticides. Barrera said eliminating the mosquito hasn’t been as successful as in the past when Puerto Rico was battling dengue, carried by the same mosquitos.

Nearly 100 women a day become pregnant in Puerto Rico, so the country is focusing on finding and educating them. The government provides mother-and-child nutrition clinics. About 5,000 women have already attended lectures on Zika at the clinics. While health clinics hoped to provide pregnant women with kits including bug repellent, a mosquito net and condoms, which would also prevent possible sexual transmission of Zika, only 30 kits arrived and were gone on the first day.

Women are told to hold off getting pregnant until the Zika crisis is over — but preventing pregnancy has challenges. The government has frozen the price of condoms, threatening stores with fines of up to $10,000 if they raise the cost. (It did the same for repellent and window screens.) But Catholic Archbishop Roberto González criticized Puerto Rico’s condom distribution plans, asking people to “practice self-discipline.” (New York Times, March 19)

Schools are run down and overcrowded due to lack of funding. Talk of “reconfiguration” of schools is actually another attempt to privatize education. High school girls make up 20 percent of all pregnancies in Puerto Rico, so schools are getting screens and air conditioning to keep the mosquitoes out. But the former secretary of health, Dr. Johnny Rullán, asked, “What are you going to do about doors if you have 50 kids running in and out?” Girls are being given insect repellent and allowed to wear pants to cover their legs.

In February, the Obama administration asked Congress for $1.8 billion to deal with the Zika crisis. While Congress has no trouble allocating hundreds of billions of dollars for war and corporate subsidies, the head of the House Appropriations Committee, Republican Hal Rogers, turned down the request and said the money should come instead from funds set aside to fight Ebola, dengue and chikungunya.

These tropical diseases will only worsen and spread north as global temperatures rise. Imperialist countries and transnational corporations are the major contributors to world climate change, much of it from deforestation and the burning of fossil fuels. Washington needs to be held accountable for money to fight the growing Zika crisis.

Work being done by the CDC on dengue and tick-borne diseases is being put on hold so CDC staffers can put all their resources towards fighting Zika. Dr. Anthony Fauci, scientific director of the National Institute of Allergy and Infectious Diseases, calls the Zika outbreak “a serious situation,” adding, “We can’t sustain it if we don’t have the support that we need.”

“There’s a fair amount of pessimism about [controlling Zika] among the people who tried to fight dengue and chikungunya,” said CDC Director Frieden.

How has Cuba been so successful in wiping out the Aedes aegypti mosquito and minimizing the Zika crisis? It wasn’t until March 15 that Cuba confirmed the first case of locally contracted Zika: a 21-year-old woman from Havana who had not traveled out of the country. In 2015, Cuba had 1,641 cases of dengue and no fatalities, one of the lowest rates in the Americas. El Salvador, with a little over half the population of Cuba, suffered nearly 50,000 cases. In Cuba, coordinated efforts by whole communities plus government resources helped curb Aedes aegypti and control dengue disease.

In Cuba, there is socialist medicine. Everyone is covered. Cuba emphasizes public health and has prevented a Zika outbreak with an aggressive campaign to monitor fevers and clean up places where mosquitoes breed. Anyone showing flu-like symptoms is tested immediately to decrease the risk of transmission of dengue virus, chikungunya or Zika.

“Cuba is famously proactive when it comes to fighting tropical diseases — with years of experience — useful now that the whole world is turning into the tropics,” pointed out The Nation on Feb. 2.

Nonbiodegradable containers like used tires and plastic bags collect water and are ideal habitats for mosquitoes to lay their eggs. Cuba is renowned for its recycling programs. Trash is creatively used to fix cars and bicycles or make toys; plastic bags are washed, dried and used over and over.

The Cuban health ministry MINSAP (Ministerio de Salud Pública) is providing even more frequent and regular checkups in order to prevent possible Zika infection and reduce the risk of microcephaly. It recommends that all women of childbearing age take folic acid, whether they are trying for a baby or not, to improve immune defense.

Infants are immunized against 13 diseases, using vaccines made mostly in Cuba. Mother-to-child transmission of HIV-AIDS and syphilis has been eliminated, paving the way for generations to live free from those diseases.

After leading Cuba’s great revolution to victory, Fidel Castro said Cuba’s future must be “a future of people of science.” Socialist Cuba was one of the first countries to develop biotechnology companies, years before Europe. Cuba exports biotech and medical products and vaccines to all five continents.

Zika has now hit 38 countries. Panama’s first case of microcephaly was reported on March 22, after a Zika crisis there. In Brazil, scientists expect an additional 2,500 cases of microcephaly because of its Zika epidemic.

The slogan of the progressive independence movement in Puerto Rico is “Puerto Rico is not for sale.” To stop the spread of Zika and reduce the risk of a whole generation becoming victims of microcephaly and Guillain-Barré syndrome, Puerto Rico needs funds for health care workers, schools and women’s clinics — not having its resources drained by a national “debt” caused by its subordination to U.S. imperialism. Puerto Rico needs a sovereign, socialist system like Cuba.

Berta Joubert-Ceci contributed to this article.