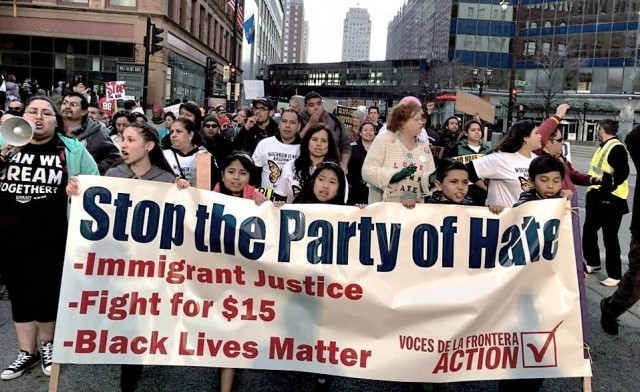 March 29 — Protesters from across the state of Wisconsin and beyond converged in the city of Janesville on March 28 and 29 to protest Donald Trump, who had a speaking engagement there.

The evening of March 28, six members of Showing Up for Racial Injustice occupied the lobby of the Holiday Inn Express in Janesville. With their arms locked together inside of PVC piping, they demanded that Donald Trump’s March 29 appearance at the adjoining conference center be canceled. The management refused and the six were arrested and charged with obstructing an officer and trespass.

The following day, March 29, those opposing Trump, including members of Workers World Party from Rockford, Ill., participated in a protest and faced off with his supporters outside the hotel. Also on March 29, hundreds of people took over the streets of Milwaukee to protest the GOP debate.

“Today we marched with hundreds of community members to say that Milwaukee is ‪#‎UnitedAgainstHate‬ and united against Trump and Cruz and the politicians who support their ideas ‪#‎StopTrump‬,” declared the immigrant and worker rights organization Voces de la Frontera.

Voces added: “This afternoon we marched with hundreds of members of the community to say that Milwaukee is united against the hatred of Trump, Cruz and all politicians who support their ideas.”

Members of numerous organizations participated in the Milwaukee protest, including the Coalition For Justice, Defeat “Right To Work” In Wisconsin, Fight For $15, the Latin American Solidarity Committee, Occupy Milwaukee, Students for a Democratic Society, Showing Up for Racial Injustice, Youth Empowered In the Struggle, Wisconsin Jobs Now and the Wisconsin Bail Out the People Movement.

Protests against Trump are also planned in the cities of Green Bay and Appleton on March 30 and in Wausau on April 2. For more information: www.wibailoutpeople.org