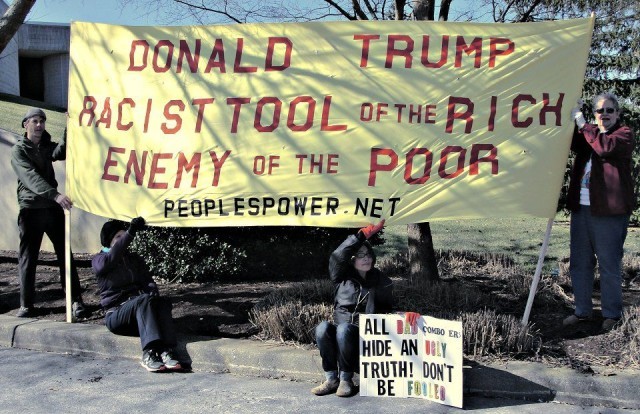 Almost everywhere presidential candidate Donald Trump goes in recent days, he has had to contend with protesters challenging his racist rhetoric.

Police kept about 50 anti-Trump protesters a half-mile from the stadium where Trump spoke in Madison, Ala., on Feb. 28. But the mostly Latino/a group lined the road leading to the event so that Trump supporters had to see their placards and hear their protest songs in Spanish and English. Inside, activists chanted “Black lives matter!” and raised clenched fists as they were carried out by security forces (see accompanying article). This followed Trump’s refusal to repudiate an endorsement by longtime Ku Klux Klan leader David Duke. His racist response was, “All lives matter!”

The next day, dozens of university students and Black Lives Matter protesters linked arms and interrupted Trump numerous times in Radford, Va. Trump yelled to one protester, “Are you from Mexico?”

That evening, more than 30 mostly Black students, standing quietly at the top of bleachers, were ejected from a Trump rally at Valdosta State University in Valdosta, Ga., some 30 seconds after the rally started. According to 11 of the students, who posted videos on YouTube, they were not at the rally to disrupt but to educate themselves about Trump. They wore black as a sign of unity. The university was whites-only until 1963.

The Trump crowd cheered when one of the students, responding to a verbal attack by a white Trump supporter, was handcuffed. Similarly, Shiya Nwanguma, a young African-American student at the University of Louisville, was repeatedly shoved and called racist and misogynous names while protesting at a Trump rally in Louisville, Ky., on March 1.

The morning after a powerful demonstration of several hundred people outside the GOP debate in Detroit on March 3, Donald Trump came to Macomb Community College in Warren, Mich., to hold one of his infamous rallies. A very impromptu demonstration was organized and a small group of activists from Detroit joined some students from the college to take a stand against Trump and the neofascist elements he has refused to disavow. Activists demanded an end to deportations, war and the scapegoating of refugees. Several people went inside to disrupt the rally on their own, and a few of them joined the demonstration after they were ejected. Though numbers were small and the specter of Trump providing a cover for fascist thugs hung in the air, the protest was spirited and brave.

Protesters took over the Trump rally in New Orleans for nearly eight minutes on March 4. Coordinated groups, including Black Lives Matter and other individuals, staged a constant stream of interruption and dropped to the ground as security forces tried to evacuate them. Trump derided the protesters as “stupid people.”

Trump was interrupted dozens of times by protesters who stood at the entrance of his rally at the University of Central Florida in Orlando on March 5. When security forces pushed and shoved a protester, Trump responded, “He’s lucky it’s not 10 years ago.” (Orlando Sentinel, March 5) Trump has complained that in “the old days” police didn’t fear for their jobs when they roughed people up. In Las Vegas, he said, “[In the past] they’d be carried out on a stretcher.” (Washington Post, Feb. 23)

At the same time, a group of Muslims marched toward the rally protesting Trump’s call for banning Muslim immigration. Bassem Chaaban said, “We … express our discontent with the message Trump has sent about not only Muslims but minorities, women and veterans.” (Orlando Sentinel, March 5) Dozens of UCF students carried signs in protest. Student Amanda Ortman said: “He wants to make America great again, but what does he want to make great again? Like 1960s great? Like segregation and a lot of racism?” (Orlando Sentinel, March 5)

Trump is heading to the University of Illinois at Chicago on March 11 and a group has called for a protest before the rally’s doors open. Within two hours after Trump announced the event, more than 300 signatures were collected to keep Trump out of UIC. The anti-Trump protest had 1,600 RSVPs by early evening, including groups like the Service Employees union, Fight for 15, UIC’s Greek Council, the Black Youth Project 100, Students for Justice in Palestine, the Not One More Campaign, and students from DePaul University and the University of Chicago.

Joe Mshahawar contributed to this report.