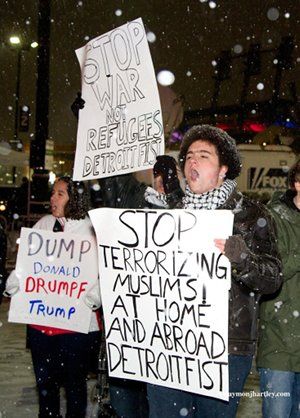 Donald Trump’s hesitancy and denial of knowing much about the Ku Klux Klan in response to an endorsement by former neo-Nazi and Grand Wizard David Duke speaks volumes about the Republican Party’s political character and its electoral base.

Trump was asked about Duke’s support by Jake Tapper on CNN’s State of the Union program on Feb. 29. He denied knowing about the far-right organization and said there might be “groups in there that are totally fine. … So give me a list of the groups and I’ll let you know.” Tapper responded with, “OK. I’m just talking about David Duke and the Ku Klux Klan here.” Trump claimed he didn’t know Duke, had never met him and knew nothing about him.

Despite efforts to clean up these statements, Trump has been attacked by anti-racist organizations and political figures from the Democratic Party and even his own Republican Party. Other forces used the statements to further illustrate the racist and neofascist character of the Trump campaign and its following.

Trump’s remarks came after a Feb. 28 Washington Post article noted the arrest of his father, Fred Trump, during a disturbance involving the Klan in New York in 1927. Numerous publications have reported this. The Post wrote that on Memorial Day in 1927, Fred Trump was one of seven men arrested in a brawl in Jamaica, Queens, during a march of 1,000 Klansmen. The elder Trump was detained “on a charge of refusing to disperse from a parade when ordered to do so.”

Donald Trump denied the credibility of the report, although it was published at the time in the Brooklyn Daily Eagle. He said that his father was “never there,” was “never arrested” and this incident “never happened.” He said he was “never even charged,” and the report is “a completely false, ridiculous story.”

Trump’s rallies have been a gathering point for racist and extreme right-wing elements who are emboldened by his primary victories and the end of the Obama administration. At Trump’s rallies, protesters have been treated with extreme rudeness, pushed, roughly escorted out and even assaulted. (See accompanying article.)

The scene was tense outside the Republican candidates’ debate on March 3 at the Fox Theater in downtown Detroit. Police and Secret Service agents set up a law enforcement barricade between protesters from civil rights, labor, anti-war and immigrant rights organizations — who were angered by Trump and the other candidates’ presence — and their reactionary white supporters.

At the same time, Hillary Clinton, former U.S. senator and secretary of state, has not prompted any hope for African Americans, although she is pandering to this key electoral base of the Democratic Party. Clinton spent considerable resources in Flint, Mich., attempting to exploit the plight of this majority African-American city of 100,000 people. Under Republican Gov. Rick Snyder’s administration, Flint’s water system has been poisoned with lead.

Clinton secured the endorsement of Flint’s new mayor, Dr. Karen Weaver, and used videos of her speeches at African-American churches in campaign commercials. In those, she pledged to address the water crisis. A nationally televised debate in Flint on March 6 between Clinton and Sanders was acrimonious.

Sanders has been criticized for not speaking out strongly enough against racial profiling by law enforcement — and about the special oppression of the African-American people. Nonetheless, the Vermont senator has recently garnered key endorsements from some leading Detroit political officials and community leaders.

African Americans were severely damaged during Bill Clinton’s presidency due to many measures. They include passage of the ominous crime bill, the Antiterrorism and Effective Death Penalty Act and the so-called welfare “reform” bill, as well as building prisons, placing tens of thousands of new cops on the streets and further deregulation of the financial industry.

Millions of African Americans lost their homes due to predatory lending, while many more suffered from layoffs and impoverishment. Meanwhile, Wall Street bankers, empowered even more under the Clinton government, were rewarded under two successive administrations with trillions of dollars in bailout funds allocated by Congress and the Federal Reserve Bank.

Even under a Democratic Party government, oppressed nations both internationally and domestically are subjected to militarized repression and superexploitation.

It should be noted that Hillary Clinton was the public face of the U.S. policy aimed at the destruction of Libya and the escalation of the Pentagon’s Africa Command (AFRICOM) throughout the continent. Under the Obama administration, AFRICOM has been strengthened and enhanced. On March 7, the Pentagon launched a bombing operation in Somalia against the al-Shabab group, resulting in 150 deaths.

Both the Democratic and Republican parties pose grave dangers for African Americans and the working class as a whole. Irrespective of their rhetoric, Clinton and Trump are on record supporting globalization and all capitalist-inspired trade deals.

The suppression of wages and today’s mass joblessness and impoverishment are essential to the current phase of capitalist economic production and relations. Wall Street financiers and their Pentagon allies will remain in supreme control, short of a fundamental transformation of U.S. society.

An independently organized fighting movement is the only possible response to the political culture that is developing, and will emerge full-blown in 2017. Notwithstanding the national elections, the contradictions within capitalist society will continue to emerge and be manifested in various social forms.