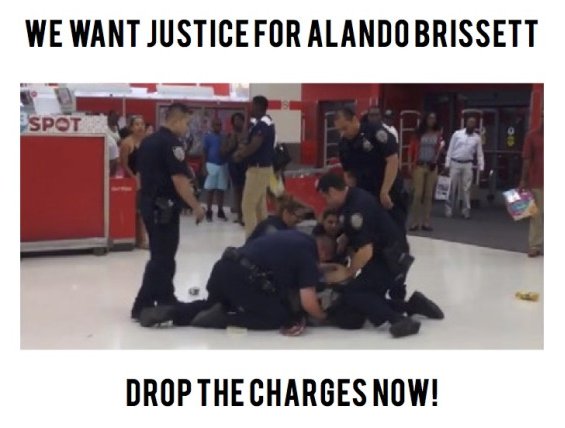 Equality for Flatbush (E4F) initiated an online petition on Feb. 26 calling for Brooklyn, N.Y., District Attorney Kenneth Thompson to drop the charges against police brutality survivor Alando Brissett. E4F and the People’s Power Assembly had co-sponsored a press conference and community speakout with the Brissett family on Aug. 3 in front of the Flatbush Junction Target store.

The online petition reads: “On July 25, 2015, four [New York Police Department] officers pinned 25-year-old Alando Brissett down to the ground, then punched and beat him repeatedly in the Flatbush Junction Target store in front of dozens of shoppers. His assault was caught on video. Alando Brissett did not steal anything or hurt anyone. He simply asked for a receipt from a Target employee for bottle redemption. After being beaten by the NYPD, Alando Brissett is currently facing the criminal charges of trespassing and resisting arrest. Tell Brooklyn District Attorney Kenneth Thompson to drop the charges against #AlandoBrissett NOW! #BlackLivesMatter.”
E4F says it was founded in 2013 “in direct response to increased tenant harassment due to gentrification and the NYPD murders of East Flatbush residents Kimani Gray, Shantel Davis and Kyam Livingston, who died while in police custody.” According to the E4F Tumblr page, the group’s ultimate goals are “to end NYPD murders and to stop the displacement of low- to middle-income people within our community.”