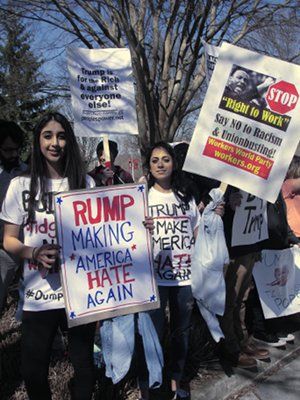 Donald Trump and his racist, bigoted supporters miscalculated when they thought they could have a recruitment rally in Southwest Virginia without opposition.

Southwest Virginia is an area of Appalachia that is continuing to be devastated by coal barons and bankers. Workers there face mass unemployment, environmental disasters, starvation, homelessness and other horrendous effects of Wall Street plunder.

Historically, one of the only organizations that has brought real relief and a livable quality of life to the workers and their communities in Southwest Virginia has been the United Mine Workers union — not Wall Street and certainly not racist bigots like Trump.

Trump thought he’d come to Southwest Virginia and have an open field to recruit white workers to his racist, anti-worker, pro-imperialist program by blaming immigrants, migrants, Muslims, Black and other people of color for the ongoing capitalist depression and its effects. In the spirit of the best fighting periods of the UMW, he got something else.

Immediately upon learning that Trump had booked the Dedham Auditorium for a Feb. 29 recruitment rally at Radford University in Radford, Va., students and their allies began protest plans through social media, campus leafleting and other organizing.

Protesters began arriving at Radford University early on the morning of Feb. 29 and took positions on the sidewalks leading to the auditorium and right outside the facility. They didn’t leave for hours, until Trump was off campus. Anti-racist, working-class placards went up, such as “Muslim lives matter,” “Jobs not racism,” “Black and migrant lives matter” and “Stop right-to-work, say no to racism and union-busting.” A banner reading “Donald Trump: racist tool of the rich, enemy of the poor” was unfurled.

By the time the doors opened, thousands were waiting, and not all going inside were Trump supporters. This became clear when almost immediately upon speaking, Trump was repeatedly interrupted. At one point, numerous Black students linked arms and began chanting, disrupting the entire proceedings, and then marching out en masse to the protest outside.

While the disruptions were going on inside the event, outside, hundreds of multinational protesters — Black, Arab, Muslim, Mexican and working-class white students and workers — began chanting slogans such as “Racist, sexist, anti-gay! Right-wing bigots, go away!” At one point hundreds of students, many wearing white T-shirts with anti-racist slogans, stood on the foyer roof of the auditorium, chanting and telling Trump and his fellow racist bigots to get out of Radford and don’t come back.