In what many are calling a resurgent movement of student protest, many thousands of youth and their supporters surged through the streets of London on Nov. 4 to protest the British government’s treatment of young people and the working class of Britain.

Although billed as a march for “free education,” the organizers of the protest, the National Campaign Against Fees and Cuts, accused the government of “waging a war on the young and the working classes across society.” Hannah Sketchley, speaking for the group, condemned, “The destruction of the youth housing benefit, the [National Health Service], social housing and working tax credits, and the spreading of anti-migrant narratives and the Prevent ‘Counter-Terrorism’ Agenda, with its wide-reaching surveillance especially on Muslim students.” (huffingtonpost.co.uk, Nov. 4) 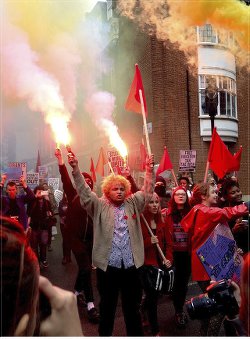 There were reports of scattered police violence along the march route. The police used such deliberate tactics as “kettling” — blocking students’ progress through the streets by corralling them and refusing to let them move in any direction. When the students protested, the police clubbed them, arresting 12.

The march was heavily violence-baited by much of the British mainstream media before it even started. The London police took the unusual step of tweeting the route of march and warning people to stay away in order to avoid “danger.”

The Conservative government and their supporters were especially hostile toward the march because it had received significant political support from the newly elected leader of the opposition Labor Party, Jeremy Corbyn. Corbyn, who is considered much more to the left than previous Labor Party leaders, not only openly endorsed the march, but sent his shadow chancellor, John McDonnell, to speak to the students.

McDonnell, a longtime supporter of student demands, electrified the crowd with a rousing speech: “Education is a gift from one generation to another, not a commodity to be bought and sold. … This government is betraying you and future generations and I’m here in solidarity for education. … Let me say this: your voice needs to be heard.” (dailymail.co.uk, Nov. 4)

During his campaign for leader of the Labor Party, Corbyn enraged his opponents by saying he wanted to “apologise on behalf of the Labor Party to the last generation of students for the imposition of fees and the replacement of grants with loans by previous Labor governments.” (theguardian.com, Oct. 2)

A struggle against austerity

Until 1998, there were no tuition charges for college students in Britain. The entire cost of higher education was borne by the British government in the form of subsidies to colleges and universities.

In 1998, a Labor government adopted a previous Conservative government’s recommendation to allow universities to charge up to 1,000 pounds in tuition. Almost all immediately did so.

In 2004, following the collapse of the worldwide dot.com bubble and the subsequent slashing of government support for education, the fees were raised to 3,000 pounds.

In 2010, following the great recession, the British government tripled the cap on tuition to 9,000 pounds (about $13,000) and made the terms for student loans — in reality a post-graduation tax — much more onerous. A discriminatory provision against foreign students, unless they come from the European Union, requires them to pay whatever the university wants to charge, without the opportunity to obtain a student loan.

The British youths’ fight against austerity is part of a worldwide movement. It deserves the support of progressives everywhere.