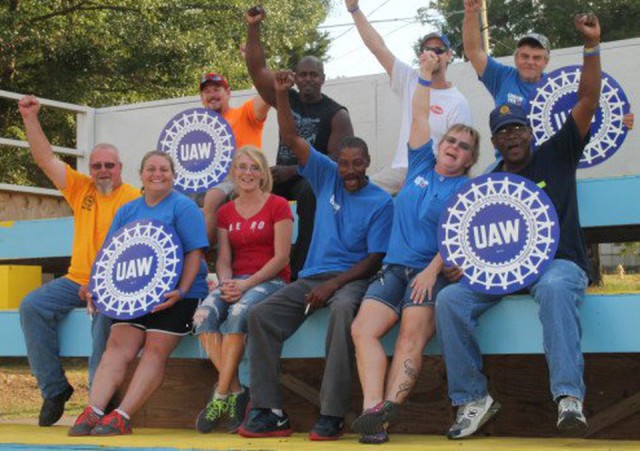 On Sept. 23, workers who produce seats for commercial trucks and vehicles at the Commercial Vehicle Group plant in Piedmont, Ala., voted overwhelmingly to join the United Auto Workers union, 89 to 45.

CVG bought the plant in 2011, and according to the workers, their pay, insurance costs and working conditions have steadily worsened.

Top pay was capped at $15.80 an hour, insurance costs tripled, and the heat inside the plant was dangerously high during the long Alabama summers. Workers made jokes about management giving them popsicles so they could “cool off” when they demanded the ventilation system be fixed.

A main issue was CVG’s use of temp workers who could stay in that status for years, getting paid $9.70 an hour with no benefits. With 141 full-time workers and as many as 60 temps, the fight for living wages and permanent status for all was a prime motivating factor in the union’s success.

The Piedmont auto parts plant is just one of many that are now located in Alabama.

Workers at the Selma plant, owned by the Lear Corporation which produces car seats for Hyundai, have likewise raised issues of dangerous working conditions with toxic chemicals and inadequate ventilation. Their pay is $12 per hour, a poverty wage in a city which is the symbol of the successful fight against Jim Crow segregation and the bloody struggle for voting rights. Lear has engaged in a vicious pushback against the workers’ union drive, firing activist Kimberly King and then suing her for defamation for her statements about health issues stemming from her job.

The UAW has organizing drives elsewhere in Alabama, including the formation of a local at the Mercedes assembly plant in Tuscaloosa with 2,200 full-time workers and 1,000 temps. While the union local does not have formal bargaining status as the result of a National Labor Relations Board election, it is in the process of building a majority membership with the power to negotiate with Mercedes.

The decisive win at the CVG plant is a reflection of the growing consciousness of workers in the face of unrelenting capitalist profiteering.

Tiffany Moore, a 34-year-old mother of two employed at CVG for six years, explained the victory: “We’re worth more than what we’re being paid now.” (annistonstar.com, Sept. 28)

And her co-worker, Joe Etherton, spoke about the significance of the win, “I hope the working people of Alabama see this and stand up and speak for themselves.”

Mathiowetz is a retired, 30-year General Motors assembly line worker and the producer and co-host of a weekly radio program, The Labor Forum, on WRFG 89.3 FM in Atlanta.