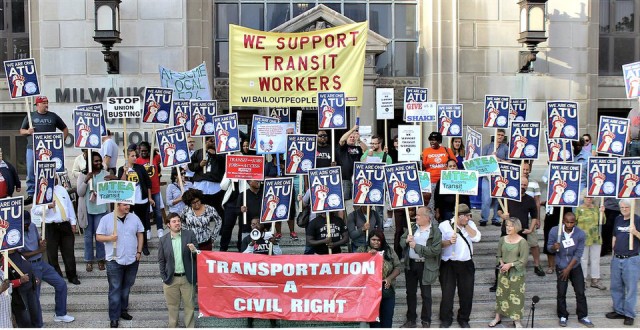 Members of Amalgamated Transit Union Local 998 and their labor-community supporters rallied at the Milwaukee County Courthouse on Sept. 24 in opposition to a concessionary contract being pushed by County Executive Chris Abele.

The ATU protest was part of a series of months-long fightback actions, which included a three-day work stoppage in July. This long-time militant union, with a significant Black membership, was led in the 1970s by well-known civil rights activist, the late Father James Groppi.

Local 998 resumed negotiations with the Milwaukee County Transit System on Sept. 25, with the assistance of a federal mediator.

James Macon, president of Local 998, says MCTS offered the union a two-year proposal with “language on part-timers that was significantly worse than their previous proposal. MCTS insists on increasing the number of lower wage, part-time transit workers, but does not want to limit the number of hours they work. We see this as an attempt to exploit Milwaukee workers by allowing them to work full-time hours without any benefits.” (cbs58, Sept. 25)

Other issues include pensions, health care cost increases and the need for adequate bathroom breaks.

The membership’s vote on the proposed contract will take place on Oct. 5. It has been postponed from Sept. 30 to give union members adequate time to make an informed decision on the proposal. The bargaining committee is urging members to vote “no.” For more information on how to support the transit workers’ struggle, see Facebook.com/ATU-Local-998.